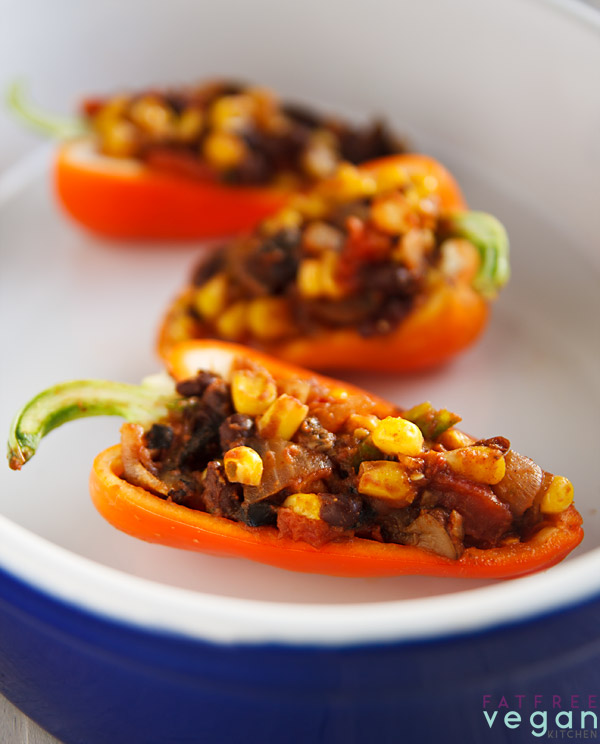 My husband’s been suggesting for years that I stuff some bell peppers, and he always wondered why I would roll my eyes and tell him he could stuff them himself. The truth came out over dinner the other night. It turns out that both of our mothers made stuffed peppers, but while D remembered them fondly, I shuddered at the memory. (Mom, if you’re reading, I’m sorry!)

Mom stuffed green bell peppers with hamburger and cooked them in cream of mushroom soup.  Oddly enough for a future vegan, I could tolerate the filling but hated the peppers themselves. To me they tasted bitter, and I always left their limp shells empty on my plate. 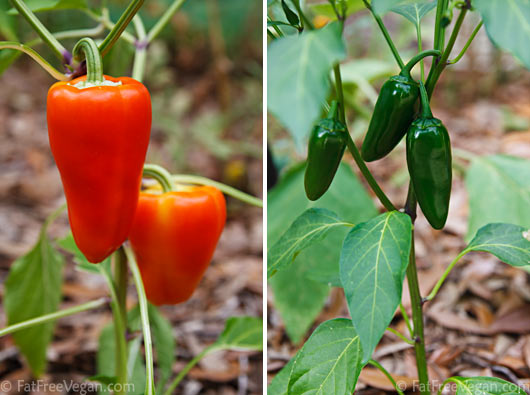 Cooking styles change and tastes change, so when our garden started producing pretty little Gypsy peppers, I began to think that I might be able to devise a stuffed pepper that I would be able to eat in its entirety.

I think the trick is having a filling that complements–and is complemented by–the pepper.  To me, peppers cry out for beans, corn, and other peppers, especially jalapenos and chili powder, so that’s where I began.

Along with those semi-traditional chili ingredients, I decided to add a natural meat substitute: diced portobella mushroom. Mushroom haters, do not turn away! I can almost guarantee that you won’t be able to taste the mushroom in this filling because of the other seasonings. It adds a certain savoriness as well as a touch of meaty texture, but not a lot of flavor, and you can chop it up tiny if the texture bothers you.

Mushrooms also add loads of antioxidants and phytonutrients, support your immune system, and guard against cancer and heart disease. You can get their health benefits without noticing their taste and texture if you give this recipe a try. 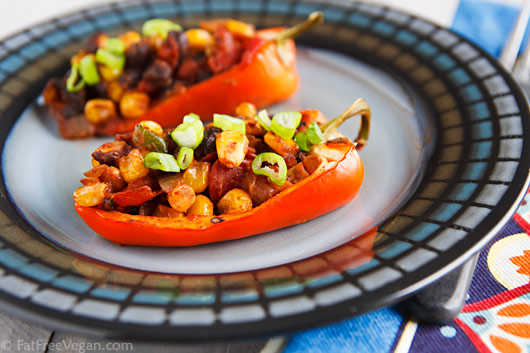 I suggest red bell peppers because they taste sweeter and less bitter than the green peppers my mom used.  I used the two small gypsy peppers from our garden and one red pepper from our fridge and had about half of the filling left for E (not a fan of peppers of any color) to eat in soft tacos. I’m guesstimating that this will fill about 5 regular-sized bell peppers, but if you have any filling left over, wrap it up in a tortilla along with lettuce and tomato or use it atop a salad for an easy lunch. 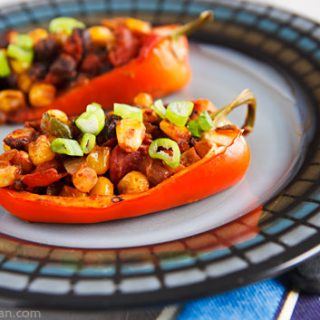 I used Penzey’s Chili 9000, a chili powder that contains cumin, oregano, and other spices as well as chiles. Depending on the spiciness and flavor of your chili powder, you may need to add more or less. One serving contains zero Smart Points on the Weight Watchers Freestyle program.
Nutrition Facts
Chili-Stuffed Peppers
Amount Per Serving (1 serving)
Calories 190 Calories from Fat 11
% Daily Value*
Fat 1.2g2%
Sodium 820mg36%
Carbohydrates 38g13%
Fiber 11.7g49%
Protein 10.3g21%
* Percent Daily Values are based on a 2000 calorie diet.