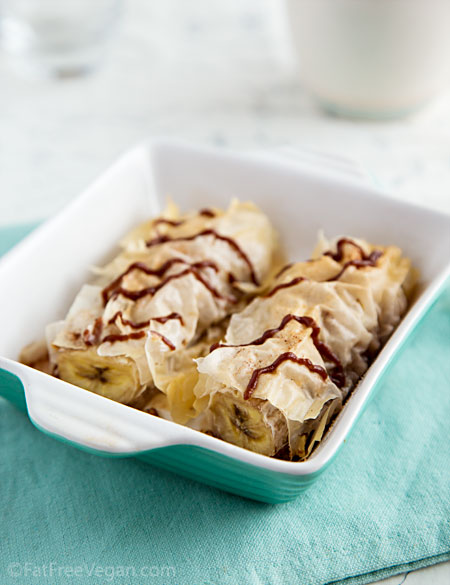 My daughter and I came up with this recipe one afternoon when we were in the mood for a quick treat and I had some leftover phyllo dough in the fridge. We call it “Wrap Your Banana,” but that sounds more like a public service announcement than a recipe! Normally we just sprinkle it with a little cinnamon sugar, but that’s so ridiculously easy that I hesitated to post it, so I fancied it up with a rich-tasting chocolate sauce that is free of refined sugar and fat.

Some Tips for Working with Phyllo

Phyllo (also spelled Fillo) is not an oil-free food, but one 9×14-inch sheet of Athens Fillo contains only 1/5 of a gram of fat, making it acceptable to me as an occasional treat. It’s not hard to work with if you keep some things in mind:

The trick to this easy dessert is to bake the bananas long enough to lightly brown the top of the phyllo while the bananas become slightly caramelized and begin to exude a delicious syrup. Be sure you capture all of that syrup and spoon it onto the finished dessert. I like to divide the banana syrup among the plates and put the baked bananas on top and then add a drizzle of chocolate sauce. But if you don’t want to take the time to make the sauce, this dessert is equally delicious with just a sprinkling of cinnamon and sugar added just before serving. 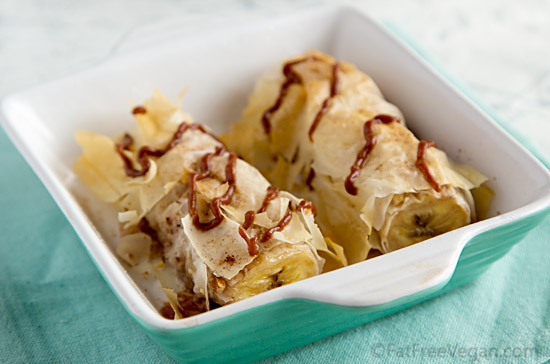 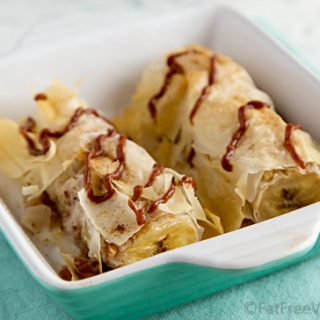 The walnuts keep the layers of phyllo separate so that they don’t become soggy. I don’t recommend leaving them out unless you’re willing the spray the phyllo with oil before wrapping. Tightly wrap the leftover phyllo and seal it in a plastic bag. It will keep in the refrigerator for up to a week, or you can refreeze it for up to 2 months. Variations:
Try spreading a light coating of raspberry or other preserves on the banana before wrapping it up.
Nutrition Facts
Bananas Baked in Phyllo with Date-Sweetened Chocolate Sauce
Amount Per Serving (1 serving)
Calories 191 Calories from Fat 20
% Daily Value*
Fat 2.2g3%
Sodium 45.9mg2%
Carbohydrates 43.9g15%
Fiber 4.3g18%
Sugar 22.9g25%
Protein 2.9g6%
* Percent Daily Values are based on a 2000 calorie diet. 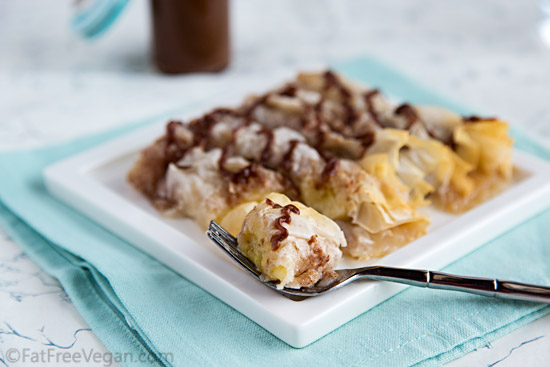 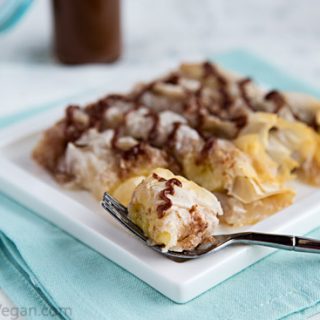