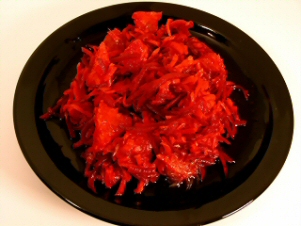 Beets are nutritional powerhouses (see below). I don’t have much experience with them, but after reading about the glories of beets, I decided to give them a try:

Shred the carrots and the beet (using a food processor is strongly advised). Cut one of the oranges in half, and squeeze the juice from one half into a cup. Peel and dice the remaining oranges and toss the pieces into a bowl with the shredded beets and carrots. Mix ginger to taste with the orange juice and add it to the salad. Toss well and serve, chilled or at room temperature.

This has to be the reddest thing I’ve ever made. (I had to resist the impulse to call it Bloody Salad.) If you’ve never worked with beets before, do yourself a favor and invest in some latex gloves because my hands are still stained, and I used a food processor.

Even with the novelty of having salad that can double as lipstick, my daughter wasn’t thrilled with this dish. She did manage to eat it, though, by stirring it into her split pea soup. Go figure! (Note to self: E. will eat anything mixed into split pea soup.) Husband D. and I liked it a little better than she did. It has an “earthy” taste that takes some getting used to, but I think we’ll try it again. Well, we have to. I have one more beet in the fridge!

According to Dr. Joel Fuhrman,

The fibers and compounds in beets provide anti-oxidant benefits and help the heart by lowering cholesterol. The pigment that gives beets their rich, purple-crimson color—betacyanin—is also a powerful cancer-fighting agent. Beets’ effectiveness against colon cancer, in particular, has been demonstrated in several studies, and beets contain compounds that have been found to inhibit cell mutations. In other words,the phytochemicals in beets aid our protective armor against disease.