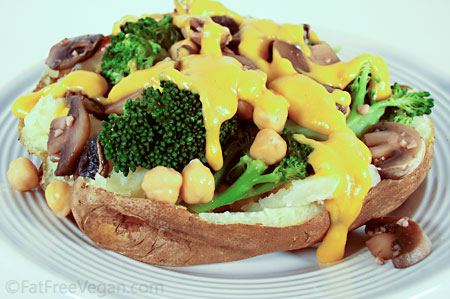 Last night was a quick meal night, so I baked potatoes, sautéed some mushrooms with garlic and a drop of red wine, steamed broccoli, heated chickpeas, and made a “cheezy” sauce. Simple and relatively fast.

The only hitch was, instead of going with one of the vegan cheeze sauces we’ve tried before, I decided to try a recipe on another blog for a fondue, figuring it could double as a cheeze sauce. Big mistake. Maybe my miso (which came from an Asian market) was stronger than the miso the recipe writer uses, but it overwhelmed the taste of the other ingredients and was too salty even without adding salt. It was the first time that I’ve made a cheese sauce that was completely inedible. I wound up throwing it out and using a packet of Chreese powder that I had in the pantry. (Though I like most vegan cheese sauces, my daughter E. has one true love, Chreese, so I buy it for her.) I really hate throwing food away, and I really wanted that recipe to be the one that lured E. away from Chreese!

Back to the potato “recipe”: I made our potato toppings and then we loaded our potatoes down and ate. Simple simple simple!

Time-saving note: I cook the potatoes in the microwave and then transfer them to a hot toaster oven for 10-15 minutes. This gives them a crispier skin and that baked taste, but saves time.

Also, three recipes for “cheese” sauce that I do recommend are the sauce from my Easy Macaroni and “Cheeze,” Nacho Cheaze, and Melty Pizza Cheese. You can find more here.