Now that my Valentine’s-induced hysteria is over, I can finally get back to writing about my new true love: Brussels Sprouts! Since our stores here have finally started carrying fresh sprouts, I’ve been cooking a lot of them, and I’ve learned why people say that fresh ones are so much better than frozen. I’ve also discovered that you hardly have to cook them at all–the preparation actually takes longer than the cooking.

My daughter E’s favorite way to have Brussels is with cashew sauce (it’s her favorite way to eat any vegetable) but, if she can’t have cashew sauce, she prefers them plain. My husband and I also like them plain, but sometimes we like to dress them up with a little sauce. So, what I do is remove some of the sprouts right after they’re cooked for E. and then add the sauce for the grown-ups. Here’s the latest way we’ve enjoyed them: 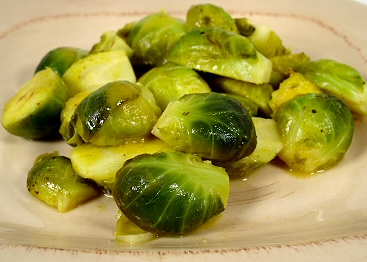 The trick to great Brussels sprouts is in the pre-cooking stage. Trimming off about 1/8-1/4-inch of the stem end and removing any discolored or shriveled leaves will make them much more tender. Then cut the sprouts in half, from top to bottom (through the stem end), to make them cook more quickly.

Spray a non-stick skillet lightly with oil and heat it over medium-high. When it’s hot, toss in the sprouts and sprinkle them lightly with salt (optional). Stir and cook for about 1 to 2 minutes, just until they brown slightly on the cut side.

Add the pepper and vegetable broth and cover. Cook, stirring every minute or so, for about 3-5 minutes, just until they are barely tender but still bright green. (I always grab one and taste it to check.) They should taste cooked, but not over-cooked, and the broth may have mostly evaporated.

At this point, I serve up a plate of them for my daughter (and nibble on a few myself). Then I mix the remaining tablespoons of broth, lemon juice, mustard, and agave nectar, pour it over the sprouts, and heat just until warm throughout. Serve immediately for best color and taste.

I think I’m going to start keeping a container of these in the fridge for snacks. Think about it: they’re low in calories, high in nutrients, and taste great. It’ll be a healthy snack for E.–and I need something to keep me away from that Valentine’s chocolate! 😉