This oil-free, vegan chocolate beet cake has no hint of the beet about it. Dark and rich-tasting, it’s a great way to get some beta carotene into your dessert! 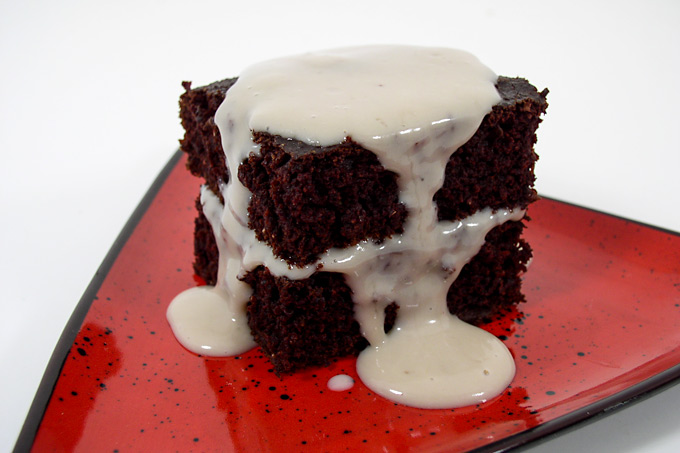 Please allow me this one cutesie title, and I promise not to do it again (fingers crossed secretly behind back).

That’s no misspelling you see in the title. I actually made chocolate cake yesterday and put beets in it. And, if you’re asking (as my husband D. did) Why?, then I’ll tell you as I so eloquently told him, Just because.

Just because I had a single solitary beet in the fridge and I wanted to get rid of it. Just because Dr. Fuhrman lists beets as one of “10 SuperFoods to Use in Your Recipes.” But primarily just because I vowed to get E. to eat beets and like them!

And…it worked! I watched as she finished her piece of cake with Banana-Peanut Butter Sauce, and just as I was about to inform her of the secret ingredient, she looked up at me, reading my mind as only a child can, and said, “Hey, what happened to that yucky red stuff you were cooking?” “It’s in the cake,” I said, with only a hint of evil glee. “Cool,” she said, and brought her plate to the sink.

Well, that was a let-down. But the cake wasn’t. It’s very dark-cocoa tasting, with no hint of the beet about it. It’s not terribly sweet, so probably next time I’ll add a bit more sugar. And I’ll put it in a smaller pan, or perhaps in two 8-inch round pans. But it’s definitely a keeper–and a slick way to get whole wheat flour and beta carotene into your loved ones.

This was such a hit that this morning as I was packing her lunch, E. said to me, “Mom, put some of that beet cake in. I want to eat my veggies!” 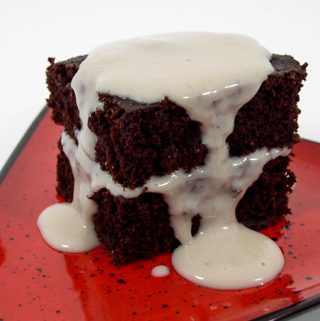 Banana-Peanut Butter Sauce: Blend all ingredients in a food processor or blender until smooth. Refrigerate until needed. The sauce will thicken in the fridge, so it’s best to give it time to chill if you plan to sandwich it between layers of cake. (Just for fun, the next time I make this, I’ll add a couple of drops of the beet juice to it to give it a slightly pink color.) Serve over cake. Nutritional info below is for the cake without topping. The Banana-Peanut Butter Sauce adds the following, per serving: 91 calories, 2.5 g fat, 63mg sodium, 115mg potassium, 13g carbohydrates, 1g fiber, 6g protein.
Nutrition Facts
Beet Chocolate Cake
Amount Per Serving (1 slice without topping)
Calories 212 Calories from Fat 9
% Daily Value*
Fat 1g2%
Sodium 471mg20%
Carbohydrates 50g17%
Fiber 4.5g19%
Protein 4g8%
* Percent Daily Values are based on a 2000 calorie diet. 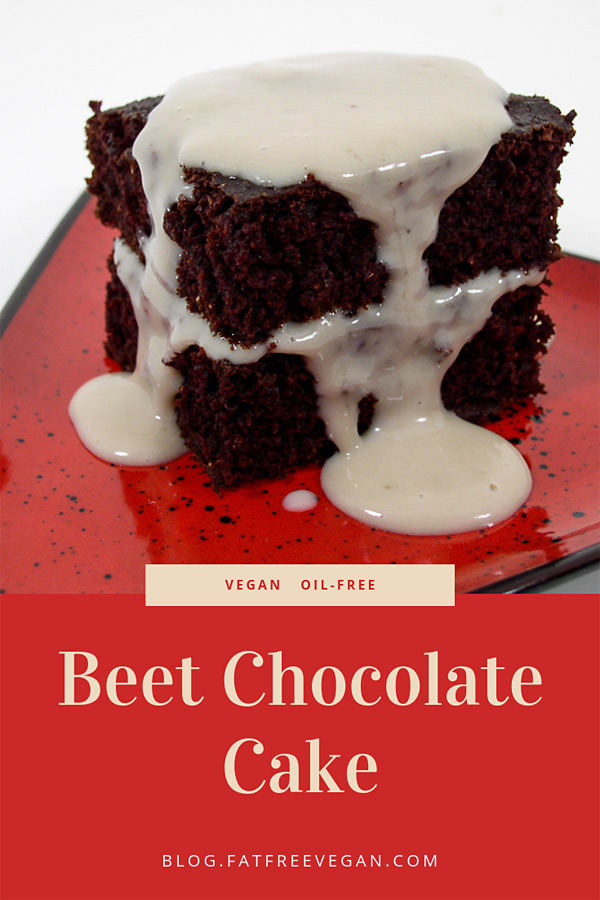