My experience with turnips has been very limited. I’ve had them diced in vegetable soup and in tiny cubes in frozen turnip greens, but I’ve never let them be the star of their own dish. That all changed last night when I prepared Creamed Turnips, and my life was forever transformed.

Well, that’s a bit of an overstatement, but I do think I will be using turnips a lot more in the future. The truth is that I had been harboring a vague fear of them because of a very bad experience with the similar-looking rutabaga. That fear arose again last night as I was chopping the turnips because they have a certain sharp odor when raw. But once they were cooked, any sharpness was gone and what flavor was left was delicate and delicious.

I’ve veganized and de-fatted this recipe from one of Alanna’s at Veggie Venture; she, in turn, lightened it up from Elise’s, at Simply Recipes. So, if you’re also a little scared of turnips, notice the fine pedigree that this recipe can claim and give it a try! It’s worth it. 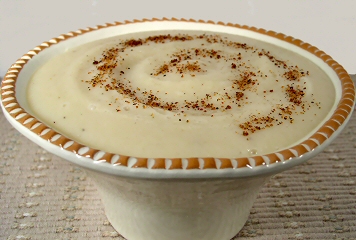 1 serving (1/4 of the recipe) contains 60 calories; 1g fat; 2g protein; 13g carbohydrate; 0mg cholesterol; 86mg sodium (if you don’t add salt); and 3 g fiber. Those following the Eat to Live plan can count one serving as half of their starchy vegetable for the day.

I could not believe how good this was! The combination of cloves and bay leaves gives the turnips a great flavor that’s not overwhelming. My husband pronounced them “very good” and my daughter…well, let’s just say that if you can let your kids believe that this is mashed potatoes, they’ll probably accept it better. I’m not saying to lie to them or anything, but it was hard to get E. to taste it at first; I swear she would have loved it if she hadn’t known it was turnips.