I know it’s finally Spring when my backyard shade garden becomes filled with mint plants. I decided to take advantage of my mint abundance and make a recipe I’ve been dreaming up ever since a photo in Paul Gayler’s A Passion for Vegetables caught my eye: 4 young zucchini hollowed into tubes and filled with…something. Never mind what was inside Paul’s zucchini–it wasn’t vegan, anyway. I just liked the look of them, but it took the arrival of the Spring herbs to turn on the lightbulb over my head. 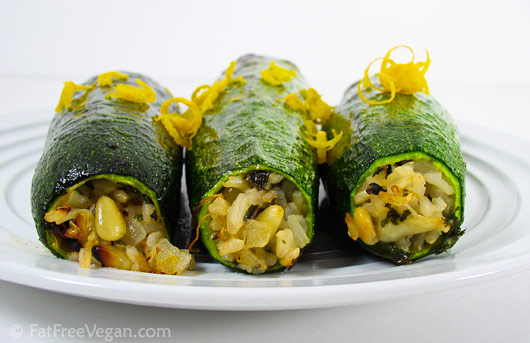 If you have to make this with dried herbs, just use about 1/3 of the amount called for. And I have to say that the rice tastes wonderful on its own, so consider making it as a side dish if you don’t feel like stuffing zucchini.

This recipe is geared toward what’s fresh in my garden right now, so feel free to experiment with other herbs. I feel very fortunate that I have oregano that stays green year-round, parsley that never dies, and, most important of all, parents who grow Meyer lemons! If I were to make this recipe later in the summer, I would definitely choose to use plenty of basil and perhaps fresh tomatoes, and I would cook them on the barbecue grill. But that’s something to look forward to in June.