I bought a bunch of organic dandelion greens a few days ago, just because they looked interesting and the price was good. I’ve never used dandelion greens before, never even eaten them (though I have pulled a few out of the garden now and then). So I went home and started doing some research that, frankly, scared me.

It seems that dandelion greens have a reputation for being bitter, with some cooks even going so far as to suggest boiling them twice, changing the water in between, in order to get the bitterness out. I am not a big fan of bitterness, so I started to worry that I had bought the wrong thing. I generally avoid mustard greens because they tend to be bitter, and it took me years to learn to like turnip and collard greens. So what was I to do with this reputedly bitter green?

The greens sat in the fridge until last night when, in a fit of bravery, I decided to throw them into the pot of red lentil soup I was making. I started small, just a cup, but when that didn’t result in bitter soup, I added more and more. These greens weren’t bitter at all, once they were cooked. In fact, they were delicious, as was the soup. And though you can’t see it in the photo, the pretty red dandelion stems add lovely spashes of color to the soup

If you make it in the pressure cooker, this soup qualifies as fast food, but it still can be a quick meal if you cook it the conventional way. And if you’re sensitive to spicy foods, reduce the amount of jalapeño and chilli pepper to taste. 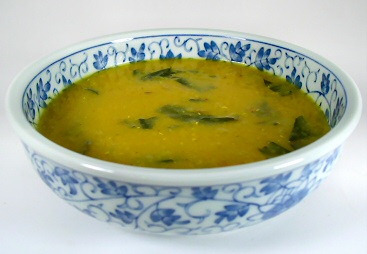 Note: If you’re using an old-fashioned jiggle-top pressure cooker, add a teaspoon or two of oil to prevent foaming.

1) In a pressure cooker, sauté the onion until soft, about 5 minutes. Add the garlic, jalapeño, ginger paste, and cumin seeds and cook, stirring, for 1 minute more. Add the remaining seasonings and cook for another minute. Add the lentils and water. Seal the pressure cooker and bring it up to high pressure. Cook at high pressure for 4 minutes; then remove from heat and allow pressure to come down naturally.

2) Add the salt (if using), check the seasoning, and add more if necessary. Add additional water if the soup is too thick. Add the dandelion or other greens and simmer on low heat for about 10 minutes, or until the greens are tender.

Regular Directions: Instead of pressure cooking, simmer the soup in a large pot for about 35 to 45 minutes or until lentils are cooked. Proceed with step 2 above.