Most of the time I cook plain, ordinary food without a thought of writing the recipe down since it’s so ordinary that a recipe would hardly be necessary. This first meal fits into that category: 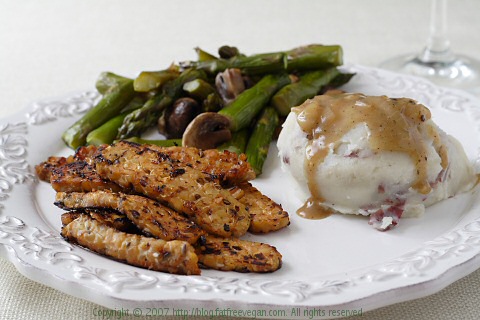 This is Tempeh Bacon, Mashed Potatoes with Gravy, and Roasted Asparagus and Mushrooms. The tempeh is simply my Cajun Tempeh Bacon without the Cajun seasonings. (My daughter’s guest for dinner that night somehow thought it tasted like chicken, which I didn’t get, but at least she liked it.) The potatoes are red potatoes, with skins, boiled and then mashed with soymilk, salt, and pepper (some black and some pink). The gravy is basically seasoned vegetable broth with corn starch added for thickening. I don’t use a recipe, just do it by “feel,” but usually sage, thyme, garlic, and onion play some part in the gravy. And the asparagus-mushroom dish roughly follows this recipe, but without the sauce. (D. and I enjoyed a few drops of truffle oil on our asparagus and potatoes, though E. thought it tasted like old socks.) 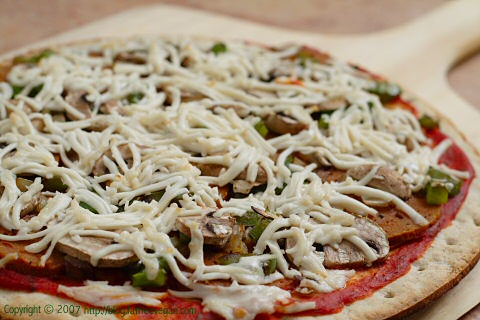 This pizza fits into to the category of “meals without recipes,” though I have a hard time calling it simple because of the homemade vegan pepperoni E. and I made for it. The pizza itself is very easy: it uses a bought crust (I can’t remember the brand, though it was vegan), seasoned tomato puree as the sauce, and Follow Your Heart vegan mozzarella for the cheese. (E. insisted that we buy vegan cheese for the pizza; I would have been happy to leave it off.) There are also sauteed onions and green peppers and sliced mushrooms under the cheese. It’s the first pizza I’ve made in a long time, and it was really good. (This is the only photo I have of it because we were so eager to eat it that I only took one!) 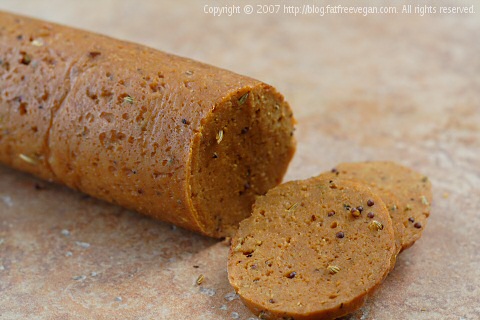 Now there is a recipe for the vegan pepperoni (or Veggieroni, as I like to call it), but I’m not ready to share it yet.  [Update: it’s here!] It’s cooked the same way as Joanne Stepaniak’s Vegan Vittles recipe and the Seitan O’Greatness recipe posted by Lachesis over at the Post Punk Kitchen Forums (and blogged by several vegan bloggers.) In other words, it’s seitan baked in aluminum foil, rather than boiled. But I switched up the ingredients a lot, and the seasoning is totally different from either recipe. It came out so well, with a couple of possible tweaks, that I’ll be making this a lot from now on, just to throw on salads or sandwiches. Or whenever a stray pizza crust finds its way into the house!