Most people outside of my home state have never had this “Greens Gumbo,” but it’s an authentic Louisiana dish. Traditionally, it was made without meat to serve during Lent, but with Louisianians being the great seafood and meat lovers they are, ham and seafood eventually made their way into this naturally vegetarian soup. Well, now they’ve made their way out again!

You can use any kind of greens you want in this gumbo–the more varieties the better. I’ve heard it said that for each green that’s put into the soup, you’ll make another new friend during the coming year. So don’t hesitate to add more than the 5 (including parsley) greens I’ve used. You can never have too many friends!

I’ve paired this with my favorite tempeh dish, Cajun Tempeh Bacon, but if you prefer, you can add one of the optional protein ingredients instead. But the spicy, smoky tempeh really takes it to a new level. 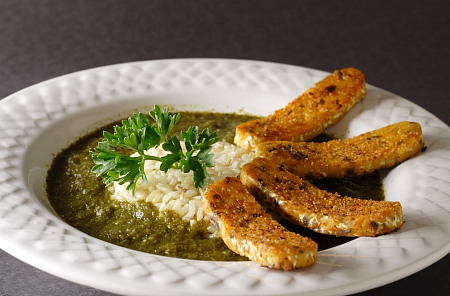 First, brown the flour in a dry skillet over medium-high heat. (If you avoid flour products, you may skip this ingredient entirely, but it will give the gumbo a richer, deeper flavor.) Add the flour to the hot skillet and stir constantly, scraping the bottom, until it is a uniform medium-brown, about the color of light brown sugar: 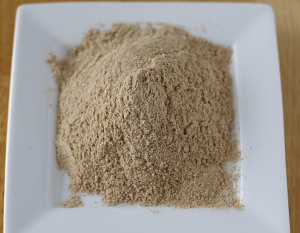 Expect to spend about 10 minutes browning the flour. Be careful not to burn it! If it burns, please throw it out and start over.

When the flour is browned, remove it to a plate to cool.

Put the onions in a large soup pot, and brown them for about 5 minutes. Add the garlic and bay leaves and sauté for another 2 minutes. Add the browned flour and stir well. Add the water, a little bit at a time at first, stirring well. Add all the remaining ingredients (except optional ones) and bring to a boil. Reduce heat and simmer until all the vegetables are tender.

Once the vegetables are tender (about 15 minutes) puree the soup using a hand blender or remove it to a blender and puree. Put it back into the pot and add any optional ingredients and continue to cook for at least 1 hour. (Longer cooking lets the flavors develop.) Just before serving, check the seasoning and add more liquid smoke, salt, hot sauce, and pepper, if needed. Serve over brown rice.

Note: Makes a huge pot, so halve it if you’re not feeding a crowd.

This is probably my favorite tempeh recipe. Besides going well with Gumbo z’Herbes, this makes a great TLT sandwich. If you have time, steaming the tempeh for about 15 minutes before marinating improves the flavor and the absorption of the marinade.

Mix all marinade ingredients together in a bowl. Place the tempeh slices in either a large ziplock bag or in a shallow baking dish. Pour the marinade over the tempeh and let it marinate for at least 15 minutes. Stir or shake the bag gently from time to time to distribute the marinade.

Drain the marinade from the tempeh and reserve it. Spray or wipe a non-stick skillet with a little canola oil and place it over medium-high heat. When it’s hot, lay the tempeh in the skillet, spoon a bit of the marinade over the top, and cook until marinade evaporates and tempeh begins to brown. Sprinkle lightly with Cajun seasoning (optional) and flip over. Sprinkle that side with seasoning and cook until lightly toasted. Serve hot.