In my last post I mentioned that I was looking forward to taking a break, and this past weekend, I got one. To celebrate our 11th anniversary, D. and I dropped E. off at his mother’s house and headed across town to a hotel in the French Quarter: 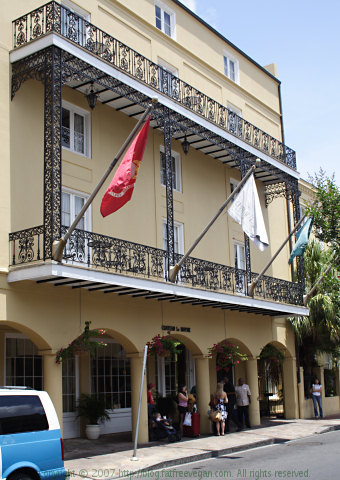 While E. was spending time with her grandmother, aunts, and cousins, D. and I planned to spend two nights blissfully alone. This is only the second time since E. was born that we’ve been childless for the weekend. The last time was exactly 5 years ago, when we left E. with my parents and retreated to New Orleans. So you can probably figure that we’ve been looking forward to this little getaway for a long, long time.

Our basic plans were simple: to eat, drink, and relax. We spent a good amount of time just sipping wine on the balcony of our room or martinis in the courtyard of the hotel, which featured fountains and plenty of blooming flowers: 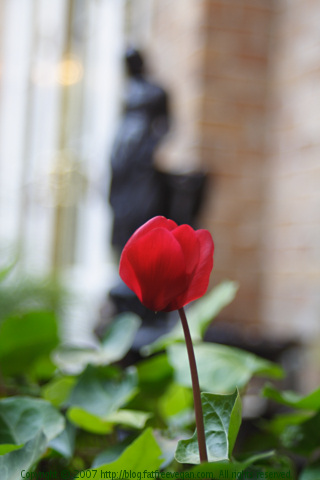 For dinner the first night, we wanted to stay close to the hotel, so we consulted the best source of info on eating vegan in New Orleans, Eating Out New Orleans, and found several restaurants within walking distance. We decided on Sekisui, an uncrowded sushi restaurant with a cozy atmosphere.

[Let me pause here and tell you that I did something that I’ve never done; after a year and a half of writing a food blog, I finally broke down and took photos of our restaurant food. I even bought a cheap, pocket-sized camera so that I wouldn’t have to lug my big Canon Rebel around with me. I still felt pretty conspicuous, though no one said a thing about it. Except for D., that is!]

Our edamame appetizer came quickly, followed in just a few minutes by the Vegetarian Plate that we decided to split: 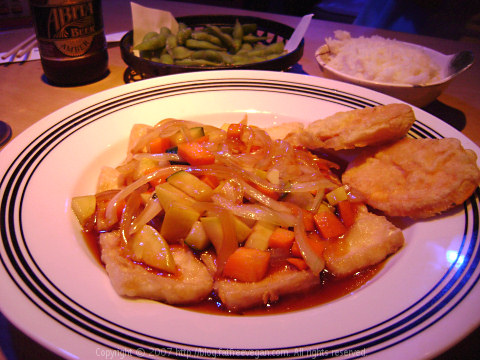 It was a fairly tasty dish of fried tofu with vegetables and sauce on top. Two slices of tempura sweet potato came with it; unfortunately, they were both undercooked. A few minutes later, our sushi order arrived: 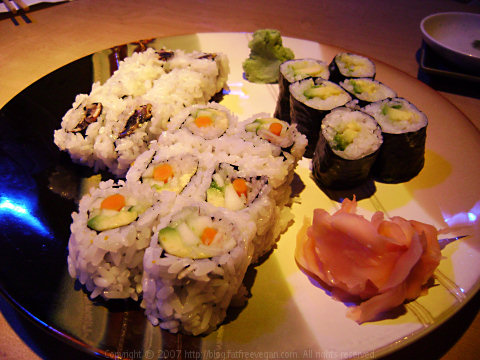 The vegetable rolls and avocado rolls were standard fare; the only really outstanding part of the meal were the Double ‘Shroom rolls you see on the left. Believe me, I’m going to be trying to make these at home, though I don’t know for sure what the two types of mushrooms were. (Vegans, be sure to tell your waitperson to hold any sauce that might contain dairy or eggs; I think these normally contain a mayo-based sauce.)

We spent the next couple of hours walking around the Quarter, watching the tourists (which we were now 2 of) and drinking some pretty bad frozen drinks. Then it was back to our hotel to sit on the balcony and count the number of men (5) who stepped behind the dumpster across the street to urinate. (I say this to you in all seriousness: Never walk behind a dumpster in the French Quarter! And fratboys on vacation, New Orleans is not your toilet. Find a (rest) room!)

The next morning we slept late and decided on an early lunch at Tandoori Chicken, just a couple of blocks from our hotel. 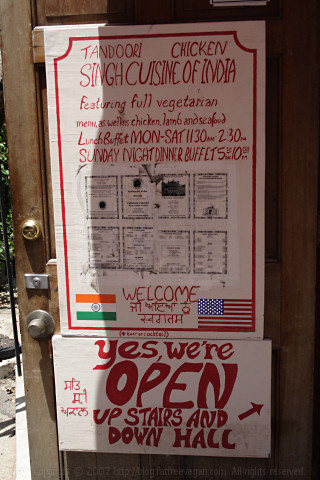 In fact, we got there too early, before the lunch buffet was set out. We were invited to come on in and sit down in the dining room overlooking Canal Street. We sat drinking water and taking photos of the street cars that passed every few minutes. 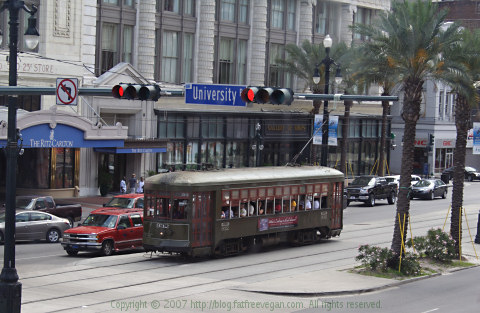 Finally the lunch buffet was ready, and we filled our plates with pakoras, dal, bangain aloo, and curried vegetables. You really can’t tell much from this photo, except what an absolute glutton I was: 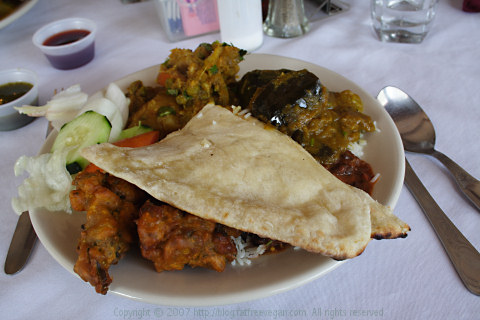 Everything was delicious, and we completely stuffed ourselves. Afterward, we talked with the owner for a few minutes about business in post-Katrina New Orleans. He says it’s been slow going (we’d noticed that there were only 3 other customers in the restaurant that Saturday) because many of the businesses that provided them with customers have not re-opened yet. So let me say this for any future New Orleans tourists or Googlers: If you’re looking for Indian food in New Orleans, check out Tandoori Chicken, 115 University Pl., in the heart of the business district, right across the street from the Quarter. The lunch buffet is a real bargain!

To work off that huge lunch, we spent the afternoon strolling around the French Quarter, popping into shops like this bookstore, where we spent a long time browsing the crowded shelves: 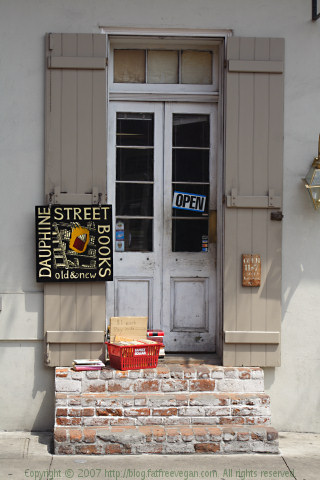 We bought so many books that we had to take them back to the hotel before we could continue on with our sightseeing. Next, we stopped in at Cafe Du Monde for an afternoon pick-me-up of Cafe au (soy) Lait: 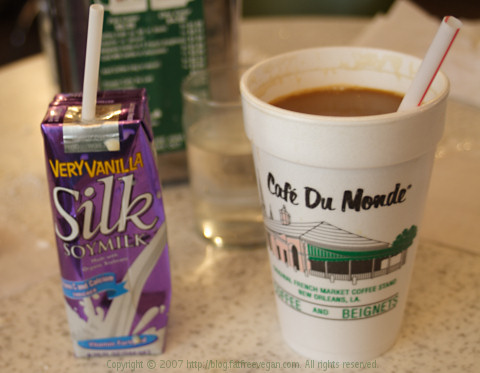 No, you can’t get soymilk at the Cafe du Monde, and I probably committed some kind of sacrilege by bringing in my own Silk milk. But maybe if enough of us vegans start bringing our soymilk and posting photos on the interweb, they will get the message and one day there’ll be soymilk at the Cafe du Monde. (Yeah, right. And world peace, an end to the death penalty and no more global warming. But I can dream.)

After we got all caffeinated, we listened to some music by the river… 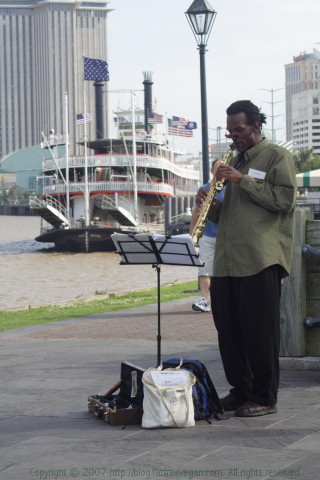 …and strolled around Jackson Square past the cathedral. 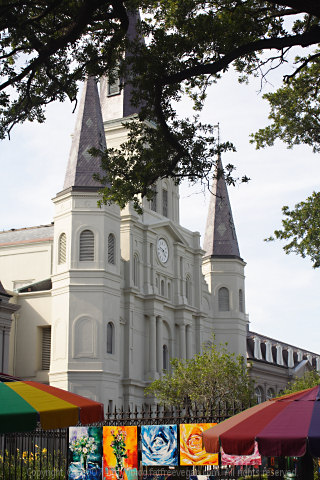 In my next post, I’ll continue with the very good dinner we had that night and the surprise trip we took the next day. Until then, keep away from those dumpsters!