We had a good Thanksgiving visit with my husband’s family in New Orleans, but I’m glad to be back home. A couple of people wanted to know what Bryanna’s Soy and Seitan “Turkey” was like, so I thought I’d post our impressions along with a couple of photos. 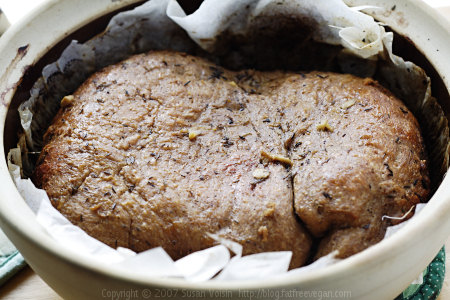 Here’s how it looked just after it came out of the oven. I cooked it in my Chinese claypot, and when it went in, it was a small oval shape. By the time I turned it for the first time, it had grown to fill the pot and start to double back on itself. It wound up being somewhat misshapen, but it looked scarily like an animal roast. It took about 4 hours to cook. 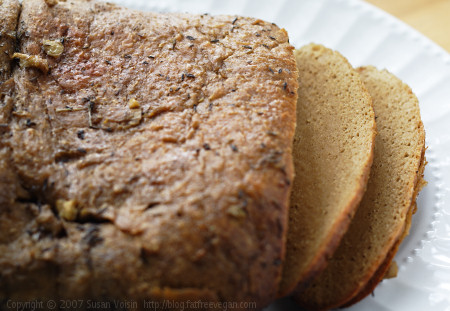 The texture inside was very dense in the middle but more porous on the outer edges. We kind of liked the taste of the porous parts best because they were more flavorful from the cooking broth. Overall, it was chewier than regular seitan and not quite as tender. We weren’t really impressed right at first but then we sliced it very thin using a mandolin and made roast seitan poboys. That’s sliced seitan roast and hot gravy on French bread with vegan mayo, lettuce, and tomatoes. Out of this world! D and I were “ummmm”-ing and “ohhhh”-ing so much that it sounded obscene. It tasted amazingly like the roast beef poboys we grew up eating. That’s enough reason for me to make this seitan roast again.

The recipe made a huge amount, especially considering that D and I were the only ones eating it. (E doesn’t really care for seitan, except Ribz. I heated her a few slices with barbeque sauce, and she would eat only one.) We’ve had leftovers for at least one meal a day every day since Thursday and still have enough left for another 2 or 3 days.

I was very happy with the other dishes I made for the big day–Sweet Potato Casserole with Pecan Topping, Cranberry Relish, and Double-Layer Pumpkin Cheesecake–but there was so much food at the dinner that my dishes kind of got lost in the crowd. We didn’t mind at all because that meant there was more for us. 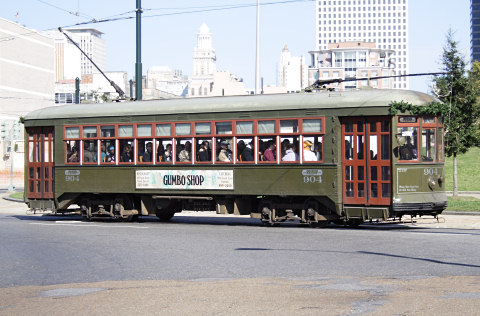 On Friday, we took a little time to take E and her cousin for a ride on a streetcar. The St. Charles’ Avenue streetcar line reopened about two weeks ago after being shut down for over two years since hurricane Katrina. Neither E nor her cousin A had ever been on a streetcar, and they were both happy to get to take a ride. 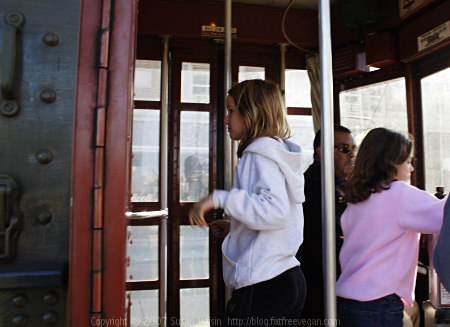 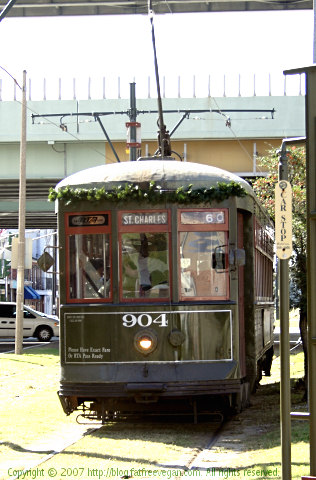 If you look closely, you can see E through the back window. The car was so full that they had to stand for the first part of the trip. (Don’t worry–D rode along with them!)

I stayed behind and took a few photos around Lee Circle. My favorites are these of the Lee statue reflected in a window of the Circle Bar: 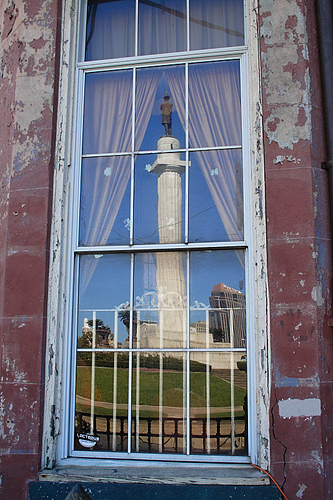 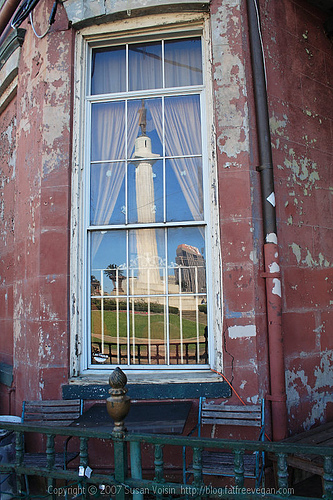 No trip to New Orleans would be complete for me without a visit to the Hong Kong Market. If it didn’t smell like fish, this huge Asian foods store would be heaven on Earth! I guess I don’t make a very good locavore because I love shopping here for produce from all over the world. In addition to baby eggplants and baby bok choy, I picked up a whole bag of some green vegetables that look like tiny bok choy, about an inch tall. I also found something I’ve been wanting for a while: 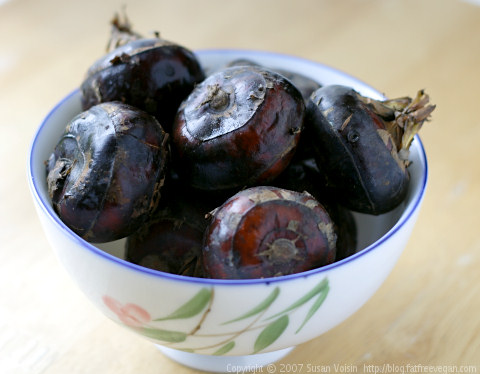 Fresh water chestnuts! I’ve been hoping to veganize this recipe ever since I saw it, and now it looks like I’ll be able to. Hmmm…I wonder how it’d be with leftover seitan roast.

Finally, here’s the reason I was so anxious to get home: 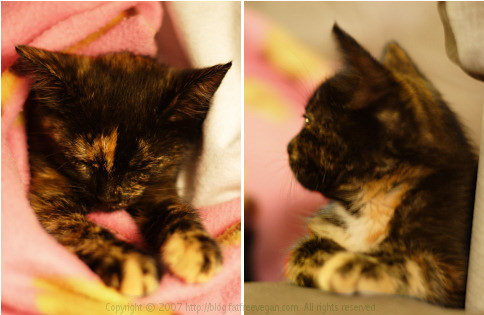 About 2 weeks ago, we added a new member to our family. Her official name is Clementine, though I call her Tiny and D forgets and calls her Catalina. After hearing me call her tiny so often, E thinks we should rename her Clemen-Tiny!

She really is tiny, so it was hard to leave her here alone with our three other cats, who want nothing to do with her. Still, I thought it would be better than being in a cage at a kennel for three days, and it looks like she used the time to get better acquainted with two of the cats. Domino, however, still won’t tolerate her. He’s used to being the baby of the family, and it’s going to take him a while to come around. But he will. Who could resist this face? 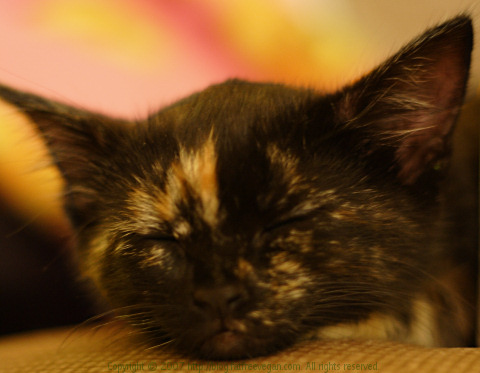 Hope you all had a great holiday and got home safely to your loved ones!