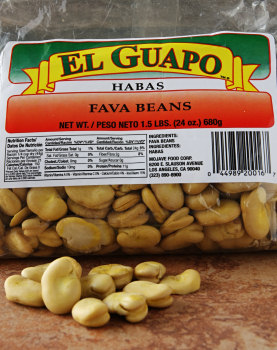 Several months ago, I was shopping in a local supermarket, one I don’t often visit, and came upon a shopping cart filled with bags of dried beans with a sign that said “2 for $1.” There were 2-pound bags of garbanzos, black beans, and lentils and 1 1/2-pound bags of a bean I didn’t recognize. I took a closer look and found that they were fava beans, but unlike any that I had seen before, they were yellow. The only time I’d ever cooked dried fava beans, they were covered by a thick, brown skin that had to be peeled off, a tedious and time-consuming process. These beans looked like they lacked that tough skin, so I tossed a couple of bags into my cart, figuring that one day I’d find a use for them.

For months afterward, they languished in my freezer. (I store beans and grains in the freezer ever since a nasty insect infestation taught me not to trust them to my pantry shelves.) But this weekend I was searching my cookbooks for new ways to use the fresh fennel I’d just bought when I stumbled upon this soup recipe in Viana la Place’s Verdura (a goldmine of fennel recipes, by the way). The recipe called for the fava beans to be soaked and then peeled, but I figured that my habas (the Spanish word for peeled fava beans) would make things much easier. Easier is good because this soup, though simple, requires a long, slow cooking time and adding peeling to the process would make it into an all-day production.

Of course, I made a few changes to the recipe. I omitted the quarter cup of olive oil, doubled the amount of fennel, and altered the seasonings just a touch; and, since I’m avoiding processed foods, I left out the pasta originally called for. I contemplated using a whole grain instead, but in the end I thought it would be easier and more in keeping with the Sicilian background of the recipe to serve it over cubes of grilled polenta. D and I absolutely loved it, though I have to warn you that if our daughter is any indication, this soup is not kid-friendly. The strong licorice flavor of the fennel was too much for her, and after choking down a few bites, she asked for a PBJ sandwich (her least favorite sandwich–that’s how much she hated this soup).

I know that most people aren’t going to be able to find fava beans–I don’t know if I’ll be able to find habas again myself–but I think that large, dried lima beans, cannelini beans, or great northern beans would all make excellent substitutes, especially if you use a hand blender or food processor to puree the beans before the fennel is added. If you’re afraid of too much fennel taste, feel free to use only one bulb instead of two. I also think this would be good with some kale or other vegetables added. I served it with a green salad as suggested by the original recipe, but with some kale, broccoli, or cauliflower, it could become a one-pot meal. 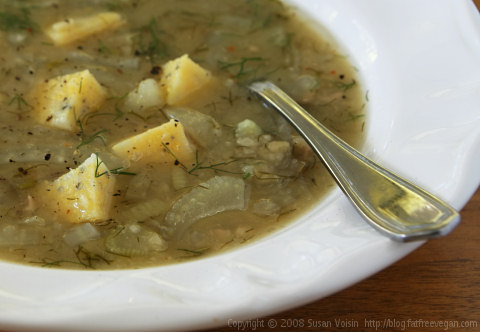 In Sicily, this soup is called Maccù.

Soak the fava beans overnight or use a quick-soak method (cover with 2 inches water, bring to a boil for one minute, remove from heat and let stand for an hour). Drain.

Put the fava beans into a large pot with 2 quarts of water, the fennel seeds, and salt to taste (about 1 teaspoon). Bring to a boil; reduce heat to very low and simmer, uncovered, until beans start to break down, about 1 to 2 hours. As they cook, mash them against the bottom and sides of the pot to form a coarse puree. Keep cooking until beans are thick and porridge-like: 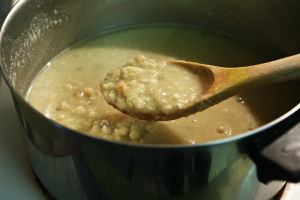 While the beans are cooking, prepare the fennel by removing the tops from the bulbs and chopping the feathery fronds. Measure out 2 tablespoons and set aside. Remove the thick outer layers from the bulbs and quarter. Cut out the tough core that begins in the middle of the bulb and extends to the bottom: 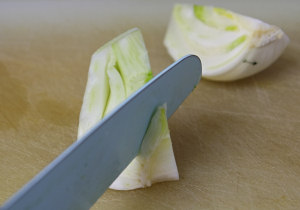 Slice the bulbs thinly and set aside.

Once the beans have broken down and become thick, add the fennel slices, 1 1/2 tablespoons of the chopped fronds, the red pepper flakes, and 3 cups of the remaining water. Cook uncovered until the fennel is tender, about 30 minutes, adding more water if it gets too thick. Add salt to taste. Serve over cubes of grilled polenta, chunky pasta, rice or other whole grain, sprinkled with freshly ground black pepper and the remaining 1/2 tablespoon of chopped fennel.

Note: To grill polenta, cut into slices and cook in a lightly-oiled, non-stick skillet until golden on both sides. Cut into cubes to serve.