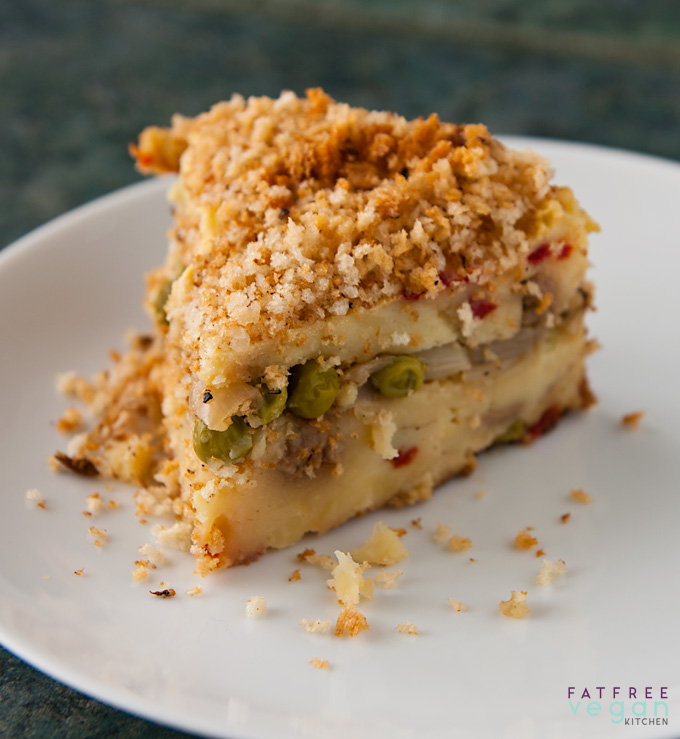 Thank you so much for all the wonderful responses to my my anniversary post. I’m happy and a little amazed to hear how many people love green smoothies, and because of one reader’s comments, I’m going to try adding collard greens to mine. All I stand to lose is my lunch. (Well, that came out wrong; I meant by pouring it down the drain if I don’t like it!)

One of my blogging resolutions was to post more recipe fails, just because they’re funny and sometimes instructive. This doesn’t qualify as a fail, though it’s a recipe that could stand to be improved. It’s a veganization of a recipe in The Italian Country Table for “Gatto” Di Patate, a layered potato casserole.

The original recipe (conveniently posted here) includes a quarter pound of salami, a cup of Parmigiano-Reggiano cheese, and a half pound of mozzarella. When I decided to veganize the recipe, I noticed the animal products, of course, but I failed to take into account how much of them there were. Also, I concentrated my efforts on making up for the strong flavor of the salami without considering the creaminess of the cheese.

I used porcini mushrooms and roasted red pepper to make up for the song flavor of the salami and nutritional yeast in the potatoes to add a little of the cheesiness of the Parmesan. Those were fine substitutions (though I think that sundried tomatoes might pack more punch than roasted peppers), but I probably should have gone a little further and substituted something for the mozzarella that originally topped the layer of onions. The casserole was a little on the dry side and would have benefited from some cheesiness. 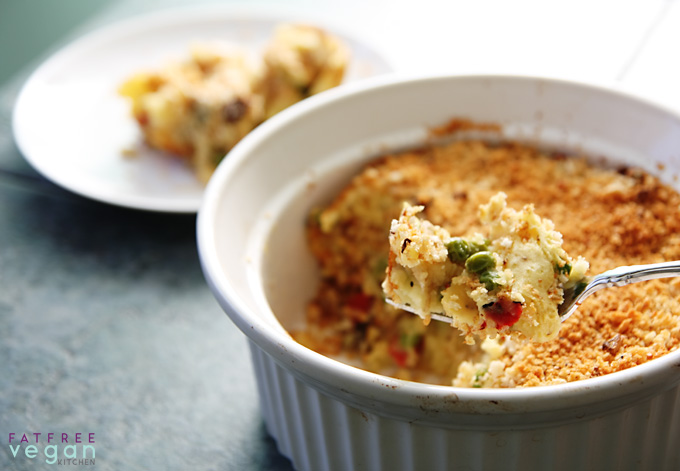 So, what I recommend, particularly if you are cooking this for guests (or picky family members), is this: Top the layer of onions with a cheese sauce such as this one. If you are not following a fat-free eating style, consider using one of the packaged vegan mozzarella cheeses. And adding a little diced veggeroni or soy pepperoni to the potatoes would really make the veganized version more like the original.

Like I said, though, this wasn’t a bad recipe; my husband D and I ate it all, over several days. E wasn’t thrilled with it, mainly because she doesn’t like bread crumbs on anything. The crumbs are heavily garlic flavored–I used 2 cloves–so if you don’t like garlic, definitely use only 1 clove. If you’re following Eat to Live or Weight Watchers’ Core plan, you can even leave the breadcrumbs off (though they are what D liked best). 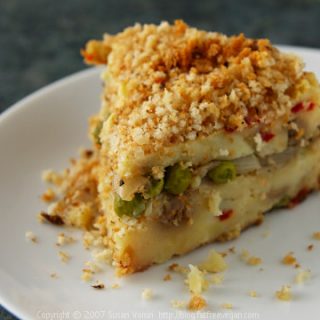 I recommend adding a layer of cheese sauce on top of the onions and peas. Some of my favorites are the sauce from macaroni and cheese, cauliflower cheese sauce, and chickpea cheese sauce. If you want, you can stir some into the potatoes, too.
Nutrition Facts
Potato "Gatto"
Amount Per Serving (1 serving)
Calories 219 Calories from Fat 9
% Daily Value*
Fat 1g2%
Sodium 78mg3%
Carbohydrates 47g16%
Fiber 5g21%
Protein 7g14%
* Percent Daily Values are based on a 2000 calorie diet.