I considered letting my two-year blogging anniversary go by without mention until I noticed that this post would be number 400, and I just couldn’t pass up the opportunity to have the two mileposts occur on the same day. To toast the occasions, I’ve whipped up something delicious, healthy, and…um…green: 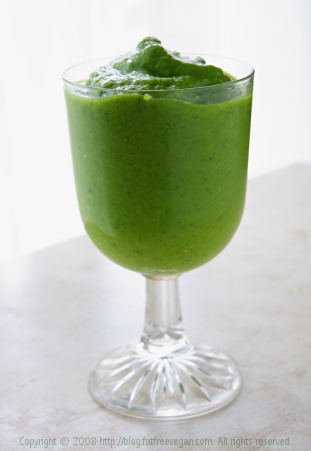 It’s been two years, and what do I have to show for it? Well, obviously, there are the 400 posts, most of which are recipes. Beyond that, I’m older, fatter and, I hope, wiser. I’ve learned a lot more about cooking by researching recipes and ingredients, as well as by reading your comments and blogs. Plus, I believe that my photography has improved a little and if not, perhaps my eye for photography has improved enough to convince me that I need to take some actual classes; there’s only so much you can teach yourself!

I started the blog on an impulse (don’t most blogs get started that way?) but with each passing month I’ve grown more committed to improving it in every way possible while still keeping my original focus: low-fat, whole foods-based vegan cooking that tastes like it isn’t good for you. Earlier this year, when the website hosting costs increased so much that I could no longer justify the blog as just an expensive hobby, I took on an advertiser. I hope that most of you don’t mind this necessary evil–it was either allow advertising or get a job at Wal-Mart (and you can probably guess how I feel about Wal-Mart). As an added bonus, the income from the ad is going to help pay for the aforementioned photography classes, so perhaps the end result will be a more beautiful blog.

Since it is also the beginning of a new year, I decided on a few blogging resolutions:

On a personal note, I’ve been advised by my doctor to get myself in shape, so I’m resolving to get away from my computer and kitchen more often and exercise. I’m also resolving to eat healthier so I’ll be following the Eat To Live

plan all the time, not just when it’s convenient. And since I’m combining it with Weight Watchers’ Core plan (they’re more alike than you’d think), you may start seeing WW points listed in the nutritional info. But don’t worry: This isn’t becoming a Diet Blog, so don’t expect the D word to pop up here again.

Now about the drink we’re toasting with: Green Smoothies (or Blended Salads) are all the rage on the Eat to Live program, and I resisted them for a long time. The first time I heard that people were blending spinach into their smoothies, I thought I was going to upchuck. But then I tried it, just a few leaves at first, and found that what they said was true: you really can’t taste it. It’s a great way to get a little more greenery into your…er…d-word. Some people use kale and other greens (mustard, ew), but spinach is about as far as I’m willing to go. If you haven’t had one, give it a try. It’s a great way to infuse yourself with a lot of vitamins, minerals, phytochemicals, and fiber–and you don’t even have to chew! 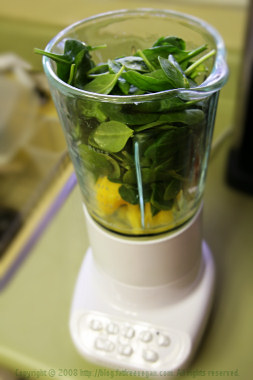 Use whatever fruit you want in this. Banana will make it creamier, while berries will make it look muddier but taste delicious.

1 cup pineapple, frozen, unsweetened
1 cup frozen mango chunks
3 ounces baby spinach leaves (about 2 cups, packed, or as much as your blender will hold)
about 1/2 cup water or other liquid

Put all ingredients in blender and puree until smooth. Add more water if necessary to get the blades moving. Drink and enjoy! 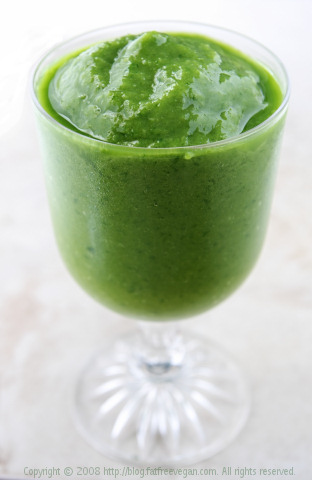 Here’s to another year of FatFree Vegan Kitchen and to all of you readers who make writing this blog so much fun.