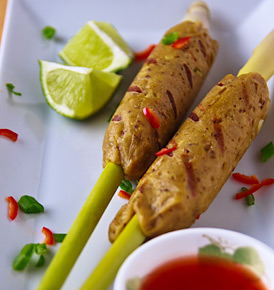 For a dish with two strikes against it, this came out tasting surprisingly good.

Strike one: Lemongrass was never meant to hold the weight of cooked wheat gluten.

I had high hopes for this recipe, though I will admit that my main hope was very superficial: I wanted it to look good. I’d seen some very gorgeous photos of lemongrass chicken kabobs on a blog called Kayotic Kitchen, and I just couldn’t resist trying to veganize the recipe. If you want something vegan that will wrap around a stick and stay there, gluten is probably your best option, so I decided to flavor seitan with Thai seasonings and steam it in the manner I’ve completely stolen from Julie Hasson.

Though they came out looking like some kind of ancient symbol of virility, these kabobs were delicious. The lemongrass gives them a great flavor and aroma, but I really believe that the seitan is better off on its own. Besides their unfortunate appearance, the lemongrass skewers tend to bend under the weight of seitan, and no one wants a droopy kabob! Just for fun, I’ve included the details of cooking the seitan on the skewers, but I really recommend saving your lemongrass for a something else and serving the seitan either sliced or cubed, with sturdy toothpicks to help convey it from sauce to mouth. 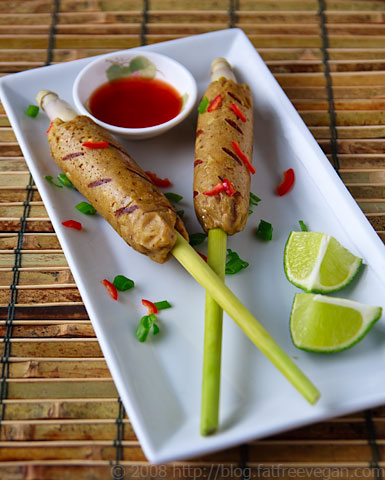 These can be made more easily without the skewers. Just roll up the dough like sausages and proceed with the recipe. The cooked “sausages” can be sliced and served on toothpicks as an appetizer.

Remove the outer leaves from the lemongrass stalks and trim them so that they’re about 12 inches long. (Trim the free end, not the end where the leaves are joined.)

Whisk the miso with a couple tablespoons of the broth until smooth. Stir in the rest of the broth, and then pour this as well as the sesame oil and lime juice into the dry ingredients and stir until well-mixed.

Divide the dough into six equal portions, about 1/3 cup each. Place a piece of foil, about 8 inches long, on your work surface and shape one of the portions of dough into a tube about 3-4 inches in length. 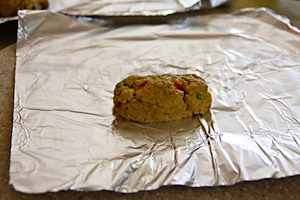 Press a lemongrass stalk into the dough, about 1 inch from the top of the stalk: 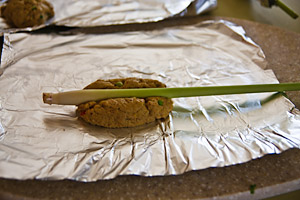 Shape the dough up around the lemongrass, and pinch the edges sealed: 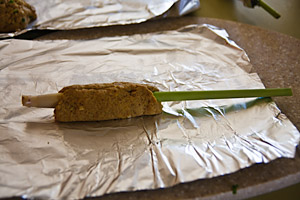 Place your palm on top of the dough, and gently roll it back and forth to even it out and seal it completely: 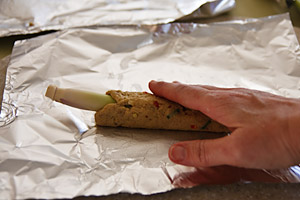 Pull the bottom edge of foil over the dough and roll up. Pinch both ends sealed, and place into a steamer. It doesn’t matter if the skewer sticks out. Repeat with the other pieces of dough. 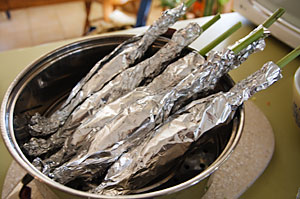 Put the cover on the steamer as best you can; again, it won’t matter if it isn’t completely sealed. Bring water to a boil and steam for 30 minutes.

When the seitan is cool enough to handle, unwrap it and brown it lightly in an oiled grill pan or skillet. Serve with peanut sauce or sweet and sour sauce with wedges of lime.

Copyright © Susan Voisin 2011. All rights reserved. Please do not repost recipes or photos to other websites. 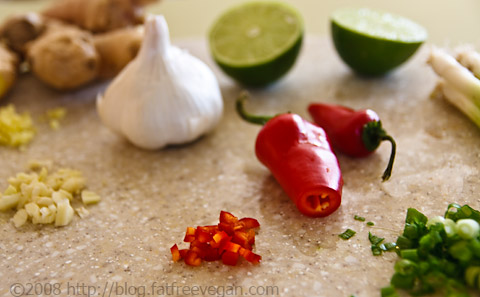