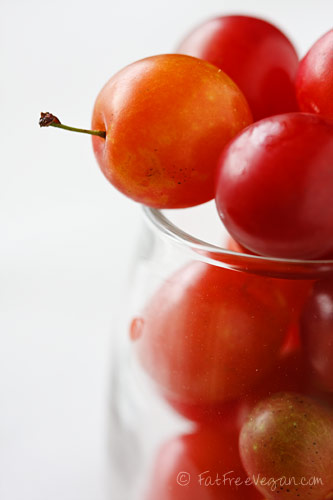 “You must not be from here.” If I had an acre for every time I’ve heard that, I’d be a farmer by now. It seems that no matter where I live, I manage to say something that betrays the fact that I grew up somewhere else.

This latest time I was at the farmers’ market, and the conversation centered around these fruits that at first I took to be tiny cherries or grapes. After going through an analysis of where I’m from–not really from here but yes from the South and yes from the country–the farmer and I decided to leave as a mystery why I didn’t recognize these red, orange, and yellow marbles as wild plums, which everybody knows can be found growing in ditches along country roads all over the South (and many other parts of the country, I later learned). In my own defense, I have a vague memory of a neighbor in South Carolina sharing her wild plum jelly with me and promising to show me where to pick the fruit. I must have moved before the next harvest.

I may not know enough to recognize wild plums, but I do recognize an opportunity to buy an authentic local food when I see it, so I bought a bag of the plums, about a pound, for a couple of dollars. The farmer warned me that they were very tart, but if I let them sit on the counter for a couple of days, they would sweeten up, a little. And so I took them home, put them in a bowl on the counter and waited. In the meantime, I couldn’t resist trying one of the reddest ones, and sure enough, it was a little sour but sweet at the same time. My daughter E had a less positive experience with them. Mistaking them for a bowl of grapes, she popped one into her mouth, bit down, and immediately wrinkled up her face like a shar pei. It seems she likes her tart only in the form of candies with unpronounceable ingredients. 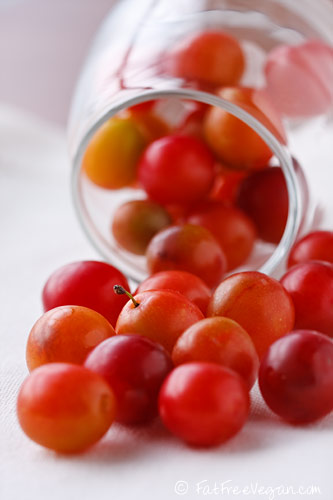 While the plums were ripening, I sought advice on what to do with them from my friends on Twitter. Jellies, syrups, and compotes were mentioned, but the idea that intrigued me was to make a sauce to use on roasted vegetables or tofu. I started thinking that if the balance of sweet to sour was right, I might be able to make a sweet and sour plum sauce without adding any sugar or vinegar.

So I did. And I was lucky. Had the plums been just a little bit more sour, they would have needed sugar or agave nectar, but the balance was just right. I was also able to avoid adding a thickener such as corn starch because of the plums’ natural pectin. So I think I can honestly say that I managed to make the purest, most natural sweet and sour sauce ever: just plum juice/pulp and seasonings. I did use a teaspoon of soy sauce, but even that could be replaced with salt or left out.

Wild plums have a pit that takes up most of the inside of the fruit. Pitting them–especially ones as tiny as these–would have been difficult as well as wasteful. So what I did was simmer them whole in a little water until the skins burst and the juice escaped; then I strained them through a colander, pressing to get some of the pulp out but keeping the pits and skins behind. If you’d like to make this with regular plums, I suggest halving and pitting them before measuring. They should cook the same as wild plums, though you may have to add lemon juice or cider vinegar for tartness. 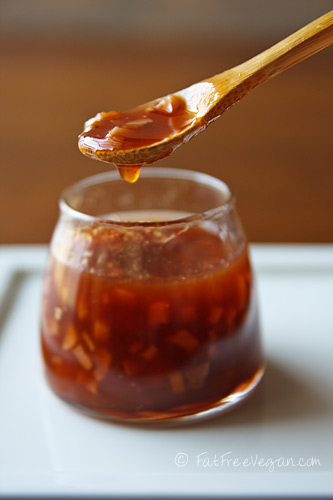 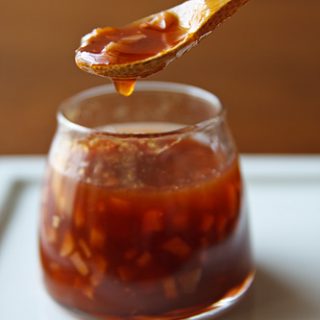 I used my plum sauce to barbecue a batch of “Ribz:” 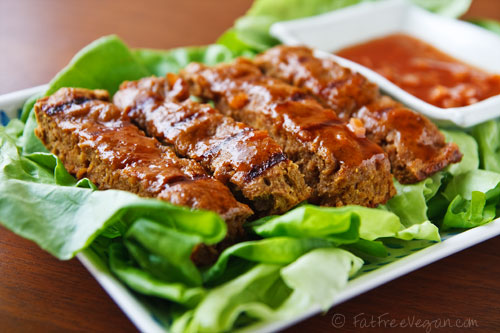 I followed the ribz recipe except I added 1/4 teaspoon of powdered ginger and 1/4 teaspoon of powdered galangal. I used about 3/4 of the sauce to coat the ribz and saved the remainder to use as a dipping sauce. We loved them! My only regret is that there wasn’t more sauce. If you have the wild plums, I recommend making a double batch and really slathering the seitan with it. The more sauce you use, the more moist and tender the ribz will be.