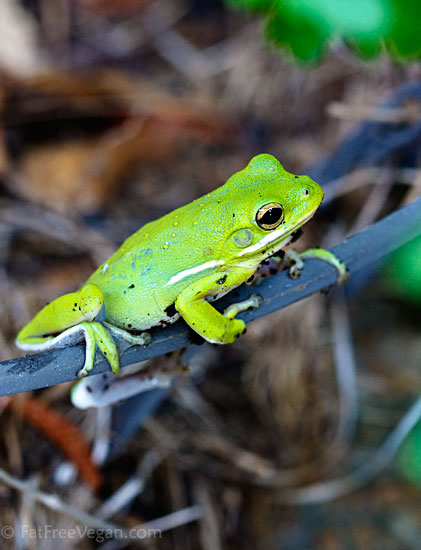 Summertime, and the living is…steamy!  While it may not be summer according to the calendar, my internal timetable says that summer starts the first time I have to turn on the AC in order to be able to sleep. I passed that milepost several weeks ago here in sultry Mississippi, but I’m really not complaining.  After an uncommonly cold and crazy winter (a city without water for nearly a week due to broken pipes), I’ll gladly sweat a little in exchange for a garden full of vegetables and a back yard full of frogs.

Yes, frogs.  While there are probably dozens of frogs and toads living in my small yard, there are two that I know well enough to say hello to every day.  The fellow above lives in a bucket of potting soil that I keep on my patio.  Until I found him (or her, according to my daughter) living in the bucket, I’d planned to finish using the soil to plant the rest of my basil, but now that I know it’s occupied, I’ve left it alone.  E and I check in every day or so, lifting the old hanging basket that partially covers the top of the bucket to see that “Greenie” is still there.  So far there is no sign that I’ll get my potting soil back any time soon, and that’s just fine with me. 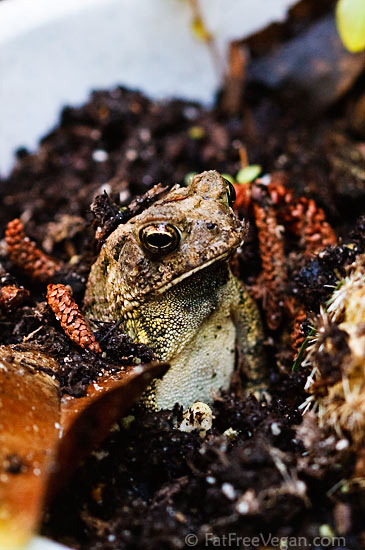 Our other summer resident lives in the soil of a potted cactus only a few feet away from Greenie.  I was watering the plants one morning when I saw him emerge from the soil and peer around, as though looking for the source of the downpour.  Since that day, we’ve found that he can dig down a couple of inches into the soil and somehow cover himself up so well that the soil looks completely undisturbed.  (We know this because E took a straw and carefully uncovered him so that she could “pet” his back; I’ve advised her to leave him alone before she chases him away.)  I never realized that toads bury themselves in the ground like this, and I can’t tell you how uneasy it’s made me as I dig in the garden. 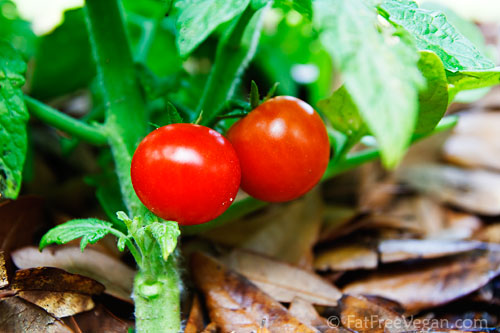 Speaking of the garden, we harvested our first tomatoes about a week ago.  To be perfectly honest, the plant came from the garden center with these two tomatoes already formed.  The rest of our crop is probably still a few weeks away from harvest, but since I got a late start planting, I didn’t mind cheating a little to get to enjoy home-grown tomatoes a little early. 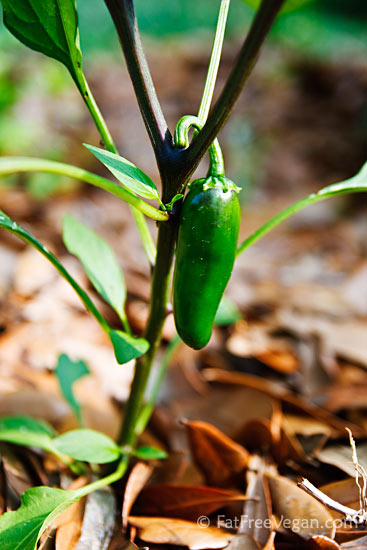 Here’s our first jalapeno pepper, which I’m planning to pick and use very soon to make International Quinoa Salad, one of our summertime staples.

I’ve been revisiting a lot of my old recipes this summer, especially those that can be served cold, because most of my cooking has been for a paying job: I’m taking the photos for Nava Atlas‘s next cookbook, Vegan Holiday Kitchen.  We’re working on Thanksgiving and Christmas recipes right now, so I’ve been using my oven more than usual for June.  After a day spent in a hot kitchen and then bending over a camera, I haven’t felt much like experimenting with new recipes of my own, so I’ve gone back to some old favorites, including:

Each week I’ve been posting links to the old recipes I’ve been re-cooking on my Facebook page, and you can get an update in your news feed any time I post by clicking “Like” on the page. 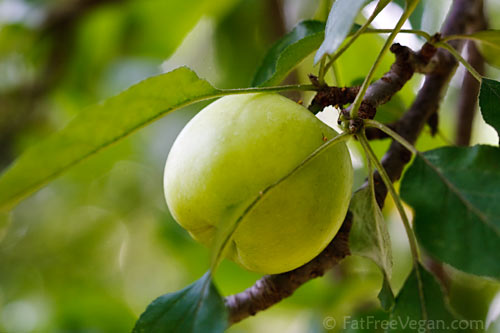 A happy side effect of having an unusually cold winter is that our apple tree, which normally bears tiny apples that only the local squirrels and birds enjoy, has managed to produce some real apple-sized apples that have a tangy yet pleasing taste.  The squirrels have taken most of them, but there’s one branch that hangs low enough and close enough to where our dog sleeps that is still full of fruit.  I may soon be breaking my no-oven rule to make an apple dessert, though it’s just as likely that I’ll make them into apple butter instead. 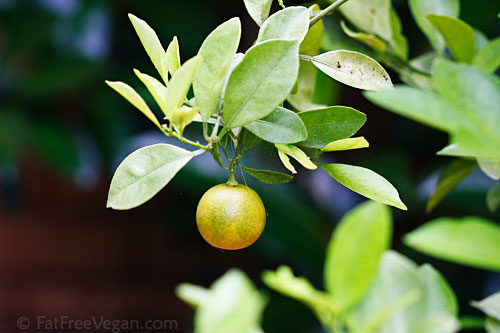 And finally, here’s one of the many fruits on our calamondin tree.  A calamondin (also called calamonsi) is a citrus fruit that I’ve photographed before and even made into pies and bread.  A couple of years ago, my father, who grows calamondins outdoors in Louisiana, gave us a potted tree that we bring into the house when the temperature drops below freezing and leave outside the rest of the time.  This winter it spent more time inside than out, crowding the window area in our kitchen, but we were rewarded for this inconvenience with about a dozen of these small fruits which should ripen in the fall.

Say what you will about the heat in Mississippi (and I say a lot!), any place that can give me tomatoes, peppers, apples, and citrus fruit growing all at the same time is paradise to me–a steamy, froggy, gardening paradise.