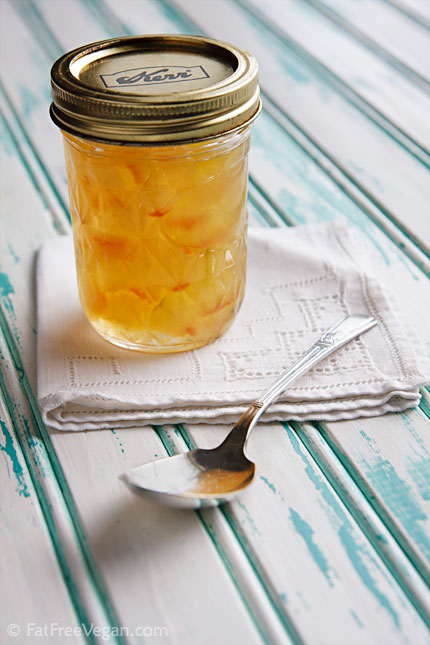 Last weekend, E and I took a train down to Louisiana for a quick, two-night visit to my parents’ house in the country. We were eating a surprisingly sweet watermelon for lunch on Saturday when my father noticed it had something he hadn’t seen in a long time: a thick rind. It seems that watermelons are being bred to have increasingly thinner rinds because the red flesh is what most people care about. You probably haven’t missed the thick layer of white between the part of the watermelon that you eat and the green outer skin–unless, like me, you grew up eating sweet watermelon rind preserves on toast, made from a recipe that your grandmother probably got from her grandmother.

With watermelon rinds so skimpy lately, my father–chief preserve and jelly maker in my family–hadn’t made preserves in years. But here was a rind that had potential, so soon my mother was taking down her recipe box and looking for my grandmother’s hand-written recipe. As she unfolded it, it almost fell apart in her hands: 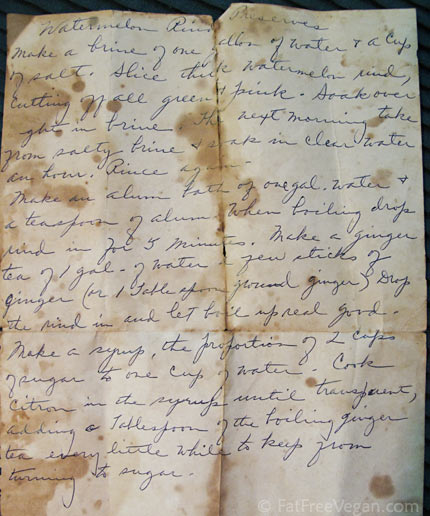 We decided two things: First, that technology needed to preserve the recipe, so I immediately started taking photos of it with my point-and-shoot camera (unfortunately, I’d left my good camera at home); and second, that we needed to follow that recipe, no matter how time-consuming it was. Though the recipe itself was skimpy and vague in places (“boil up real good”), my parents had both made the recipe many times, so I trusted them to fill in all the blanks.

With all four of us trimming off the red and green parts of the watermelon and cutting the cubes into bite-sized pieces, it wasn’t long before we had a bowl full of rind waiting to be preserved. We got it soaking it in salt water, as directed, and faced our first challenge: finding alum. After many calls to local grocery and drug stores, my mother finally tracked it down to WalMart, of all places. (It’s in the spice section, if you’re looking.) 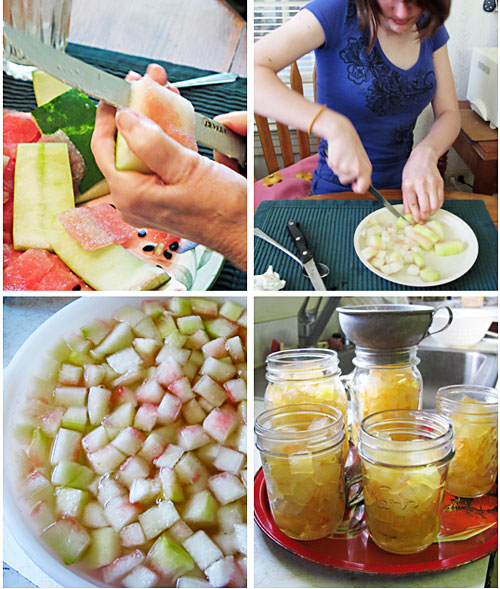 Early the next morning, we found that my night-owl father had already rinsed off the salt and gotten the rind soaking in fresh water. So all that was left was to make an alum bath, a ginger tea, and a sugar syrup and boil the jars and canning lids to sterilize them. Soon, every pot my mother owned crowded the stove, and the kitchen grew as hot and steamy as a Louisiana summer.

Because the recipe wasn’t completely clear, we made a couple of changes as we went along. After cooking in the syrup for about a half hour, the watermelon rind (or citron, as my grandmother called it) had become translucent, but the syrup wasn’t very thick. I made an executive decision to transfer the rind into the canning jars with a slotted spoon, add a little more sugar to the syrup, and let it cook down a little more before pouring it over the rind in the jars. This seemed to work well, and a couple of days later when we tested the preserves, the rind was tender but still retained some “bite” and the syrup was sweet (probably too sweet to most tastes) and lightly ginger-flavored.

I’m glad I got the opportunity to make my grandmother’s recipe as-written, before the paper it was written on completely disintegrated. Since embarking on this experiment, I’ve done a little web research and found other, easier recipes for watermelon rind preserves, and if I find another thick-rind watermelon, I will definitely try to find a less complicated way to preserve it. Some versions include lemon or cinnamon or cloves, and I’d like to experiment with those flavors. My father suggested making the syrup with watermelon juice instead of water, and I think that would be a great way to increase the watermelon flavor and decrease the sugar.

For now, I’m treating myself every now and then to a bite of this old-fashioned confection that reminds me of childhood and home. It’s full of sugar, so I certainly don’t call this a health food, but a little bit is good for the soul–my Louisiana soul at least. It was a lot of work but worth it to preserve an old family recipe with my parents and bring my daughter in on the tradition. I think I’m going to have to find more of my family’s old recipes to cook with them! 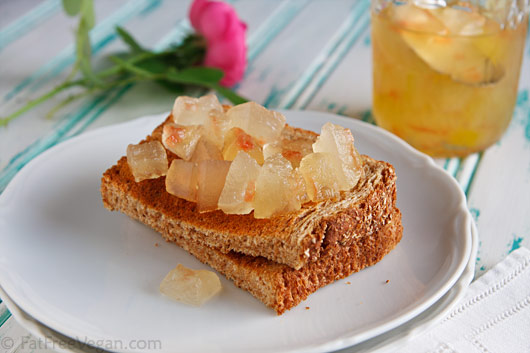 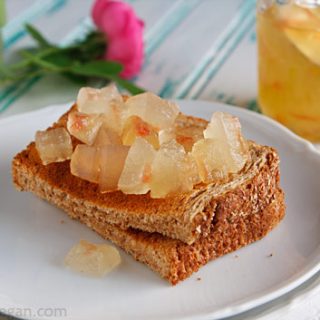 I’m no canning expert, so if you attempt this recipe, I recommend doing some research on canning first to make sure that the preserves will not spoil. Just to be on the safe side, I am keeping my jars in the refrigerator.