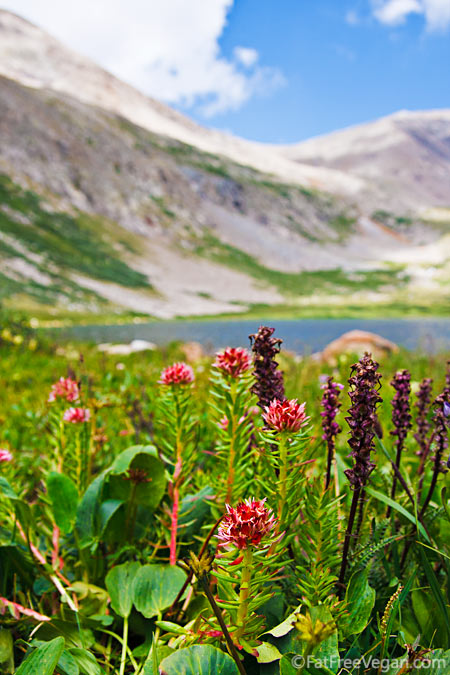 It started out with altitude sickness and ended with food poisoning, but my family and I still had a great time on our trip to Colorado. Here, in mostly photos, are the highlights: 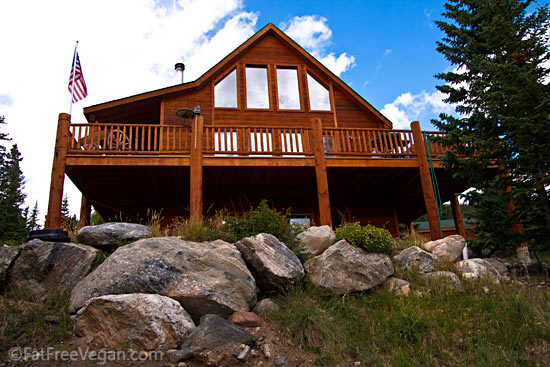 We arrived at our rental “cabin,” a three-bathroom house on Mt. Lincoln above Alma, Colorado (the highest town in the U.S.), at around 4:30 on Sunday afternoon. We’d gotten up at 4:00, flown out of Jackson at 6:00, and arrived and rented a car in Denver at 11:00. Our first stop was at WaterCourse Foods for lunch, where we went crazy and ordered two appetizers, Nachos and Seitan Buffalo Wings, that came in such huge portions that none of us had any appetite for our main courses, even though we managed to stop ourselves halfway through the wings (which were delicious but not remotely low-fat) and have them put in a to-go box. The rest of the food was good but didn’t make much of an impression since we were already stuffed. We waddled out the door and headed to the nearby Whole Foods where we stocked up for a week of cooking for ourselves. 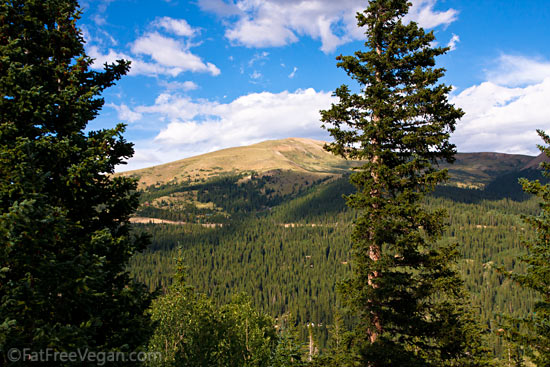 We’d been warned about altitude sickness, but I still wasn’t prepared for all of us to feel as bad as we did. Coming from under 300 feet to over 10,000 feet, it’s to be expected, but if I hadn’t read up about it ahead of time, I would have thought that my pounding heart, shortness of breath, and exploding headache were signs of a heart attack. We decided to take it easy and rest the first afternoon and morning at the cabin, which gave us lots of time to enjoy the view of the mountains and the animals that came to the feeder on our deck for birdseed. 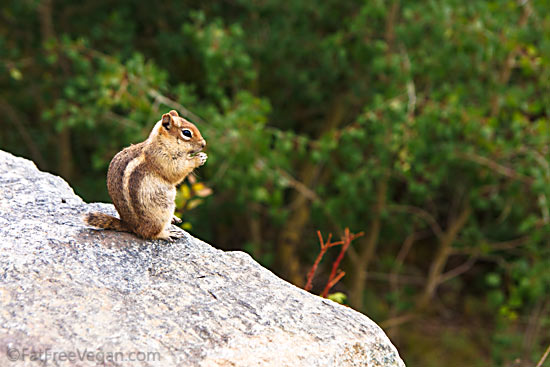 The chipmunks were hard to photograph, but the Golden-Mantled Ground Squirrels, which look like large chipmunks without stripes on their heads, let us get fairly close to them as they stuffed their cheeks full of seeds. And one of the “regular” tree squirrels was so bold that I actually managed to touch its tail as it stared me down. The most surprising animal encounter came from this fox: 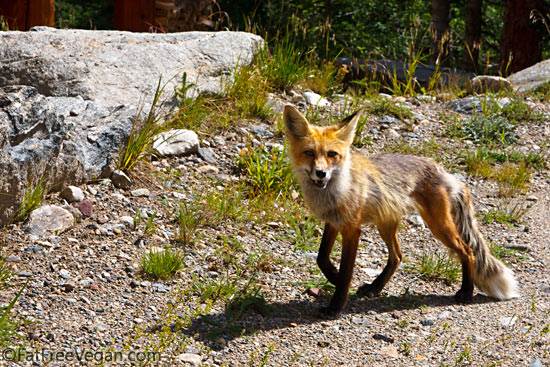 My husband spotted it as we were backing our car out of the driveway. I jumped out of the car to get a good photo of it, thinking that it would run away, but it came around the back of the car and headed toward me. I dove back into the safety of the car and got some great photos of it panting, “smiling,” and basically looking like a skinny red-furred dog. 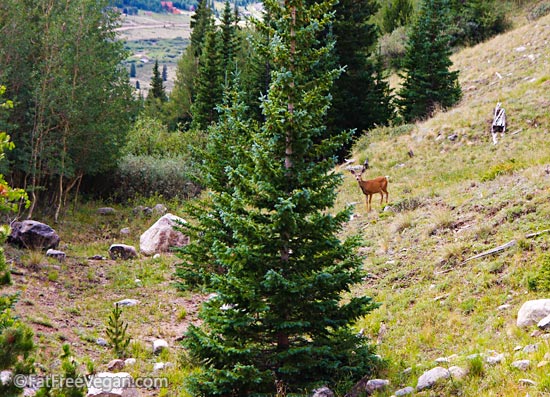 We saw only three deer during our week in the mountains, but this one posed for us at the edge of “our” yard for a while. 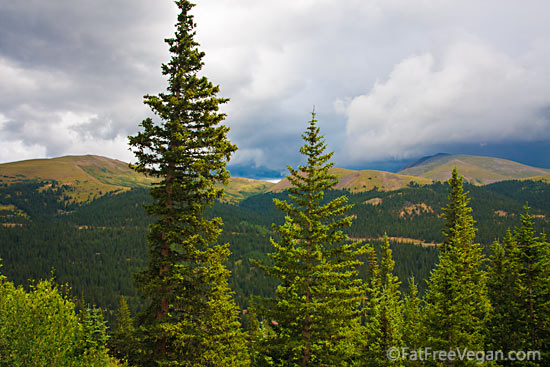 As much as we enjoyed the antics of the animals (and I have a whole CF card full of squirrels and chipmunks), even more impressive was the ever-changing view of the mountains. Every day but one, afternoon thunderstorms–sometimes several of them, from different directions–rolled in, changing the light and the look of the mountains. The photo above is of the storm clouds in the distance, while the one below is of the same view just after the storm: 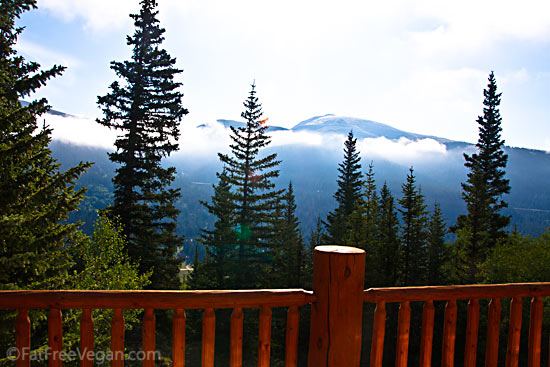 We finally felt well enough to do a little sight-seeing on Monday afternoon. We drove to nearby Fairplay, whose current claim to fame is that the setting of the TV show South Park is loosely based on it. This, of course, was enough to make it the highlight of the vacation for my South Park-loving daughter (she’d even bought a florescent-orange hoodie like one of the characters wears, which turned out to be perfect for locating her in a crowd or up a mountain). I’m not sure she completely understood that the museum we were going to see in Fairplay, South Park City, was actually a recreation of a Colorado mining town. 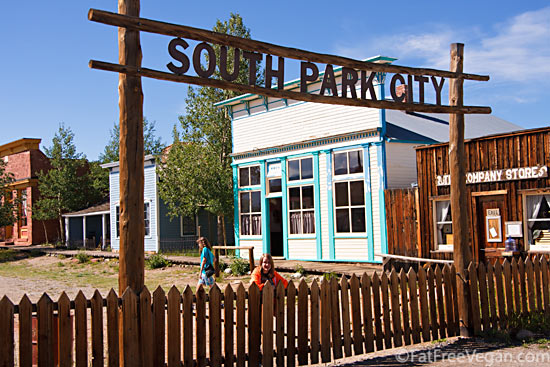 Still, she enjoyed checking out the restored buildings, each of which was filled with artifacts from everyday life during the 1800’s. 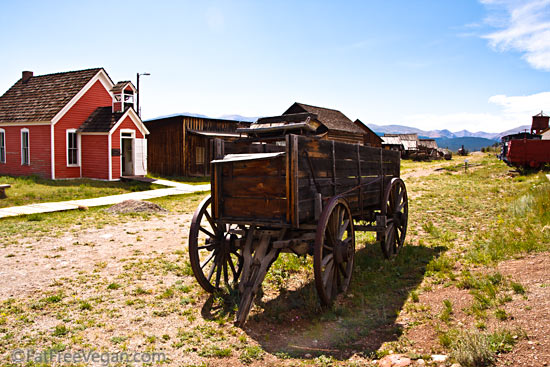 And, of course, there was the obligatory stop at the South Park photo op: 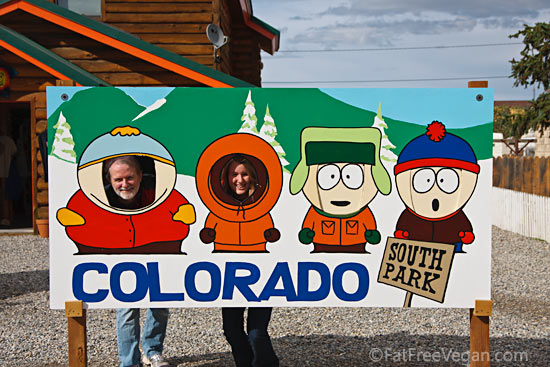 The next day, Tuesday, we were all feeling better, so we took a trip up a long dirt road to Kite Lake. 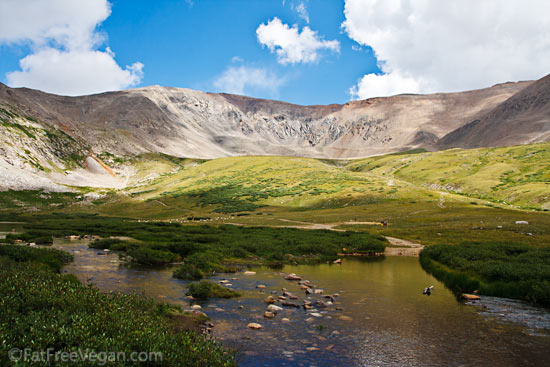 Kite Lake is the starting point of a trail that leads up to three 14,000 foot mountains (14ers) that people often climb in one day. We weren’t quite up to making that hike, and besides, we’d lazed around the cabin too long and gotten such a late start that thunderstorms were already gathering (and you don’t want to be at the top of a bald mountain during a storm). Still, it was a beautiful place for a picnic, and afterward, E took off on her own for a hike around the lake. 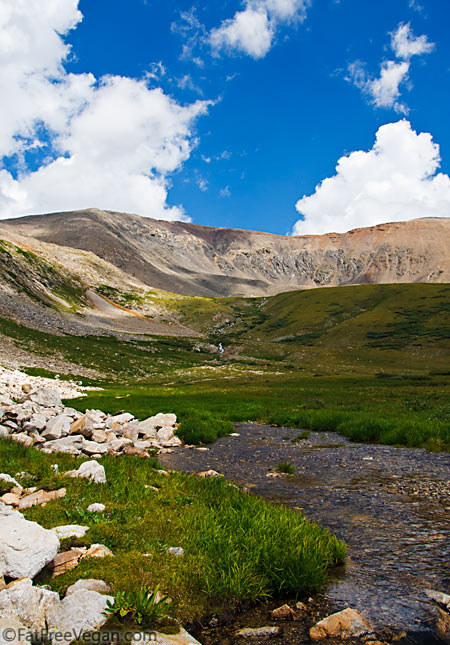 This is where that orange hoodie E bought came in very handy! The lake is bigger than it looks, but I was able to keep an eye on her because of the glow of her orange jacket. In the photo above, look for a tiny orange dot just below and to the right of center. That’s E! And that’s how huge these mountains were. E and D managed to walk right up to a waterfall while I stayed behind taking photos of wildflowers. 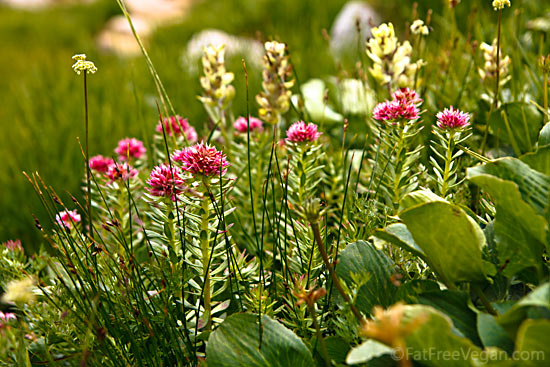 On Wednesday we took an all-day trip to Colorado Springs. Along the way we stopped at Florissant Fossil Beds National Monument, where I didn’t get good photos, and at the Wilkerson Pass visitor’s center, where we were treated to a gorgeous view of the mountains across the South Park Basin: 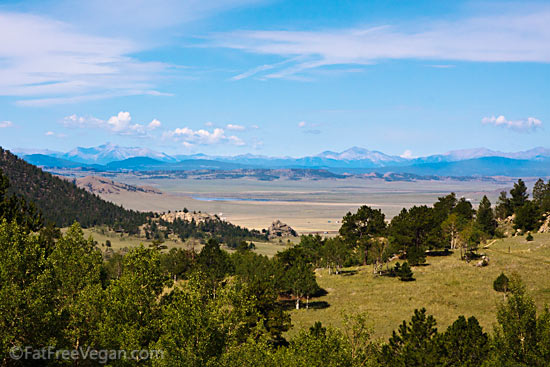 We had a good lunch at Adam’s Mountain Cafe in Manitou Springs (since this is a food blog, I feel compelled to note that I had curried red lentil soup and a falafel wrap, even though I didn’t feel compelled to take photos of them), and then we headed for the main attraction, the Garden of the Gods: 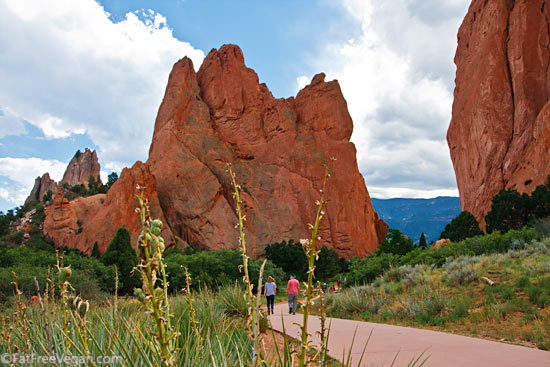 Once again, we’d taken a little too long to get to the great outdoors, and about halfway through our walk around the park, dark clouds began to appear: 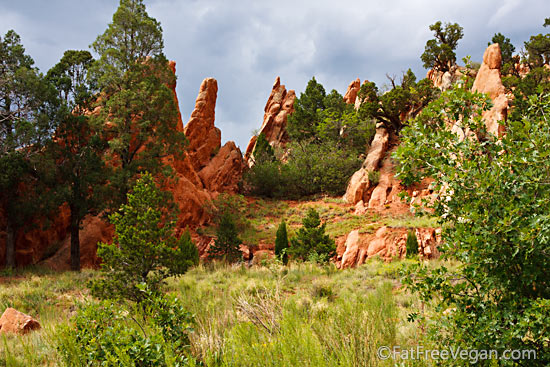 Even though the paths were wide and there were maps (though none with a helpful “You Are Here” arrow), we managed to get turned around a couple of times and just barely made it back to the car without getting drenched. 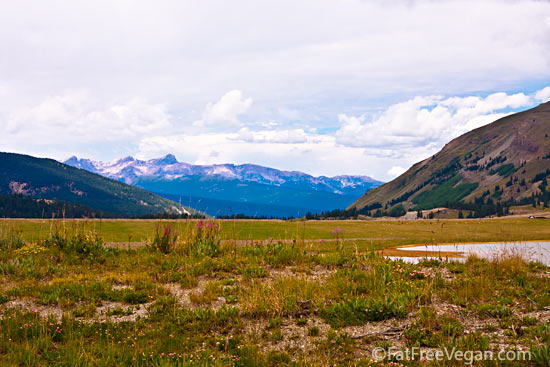 The final two full days are a blur. On Thursday, we took a drive to Leadville, an old mining town, stopping on the way at Twin Lakes for a picnic. If I had it to do over again, I would skip the picnic and look for vegan food in Leadville because the next morning I woke up in gastrointestinal agony (I suspect I touched something I shouldn’t have before eating my sandwich). I’ll skip the gory details, but after spending the day (which turned out to be the only one it didn’t rain) in bed, I wasn’t getting better, and because we had to travel all the next day, we decided to see the doctor at South Park Medical Clinic in Fairplay. I can’t praise the doctor enough: She agreed to see me though there were no openings in her schedule and stayed two hours after closing, alone, to give me IV fluids and anti-nausea meds. By the next day, I was feeling well enough to travel 12 hours by car and plane, and I owe it all to her.

And yes, some of you will remember that last year’s family vacation involved a trip to the emergency room when E broke her foot. Let’s hope doctor’s visits aren’t a new family vacation tradition!

As you may suspect, I’m sharing these photos with you because after a week away and several days recovering at home, I don’t have a new recipe to post just yet. Give me a few days and I’ll be cooking again! 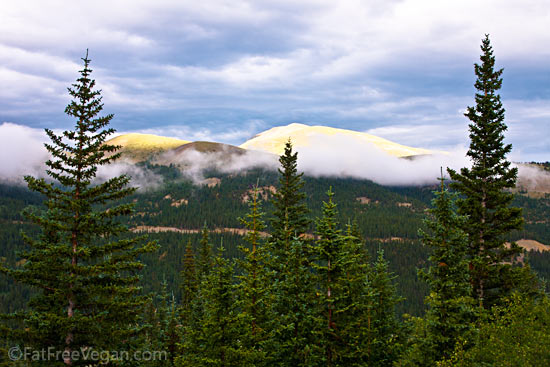