Sweetened with dates and stevia, this low-fat vegan strawberry pie combines an oat crust with a creamy tofu-cashew filling topped with fresh strawberries. 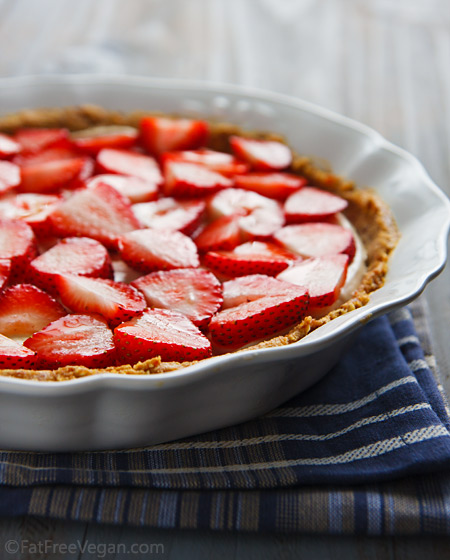 My mother’s strawberry pie is the one dish I remember from my childhood with so much love that I’ve never tried to veganize it for fear of messing it up. The recipe is simple–spread a layer of sweetened cream cheese in a pie crust and pour over it a layer of strawberries in a cornstarch glaze–and through the magic of Tofutti cream cheese, I know it could be easily made vegan.

Still I resisted attempting it, in part because I don’t like the taste of raw Tofutti and in another part because I don’t like its main ingredients, soybean, palm, and olive oils. So it comes as a surprise to me that for the last two weeks I’ve become obsessed with not only making that cherished dessert but also making it without using vegan cream cheese, oil, or even sugar.

You could say that I got over my fear of messing up my favorite childhood dessert by totally messing it up, recreating it from the pie crust up. The end result is similar to my mother’s pie but different enough to be a new creation, lighter and healthier but still a delicious summertime treat.

I tested this pie three times before arriving at the “final” version (as final as anything can be in cooking). Like Goldilocks’ experience with the Three Bears’ beds, the first pie was too soft, the second was two hard, but the third was just right. Unfortunately, I don’t have photos of the “just right” pie–the single slice you see below is the “too hard” version; you’ll just have to trust me that the final version is firm enough to hold together but still manages to have a airiness about it. 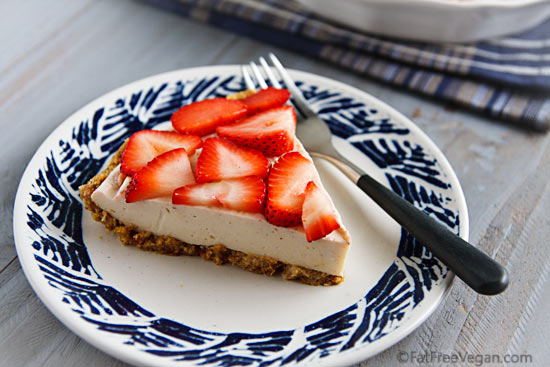 Finally, I know someone is going to ask about leaving out the cashews, and I apologize to those of you who are following a nut-free diet and can’t eat them. I used them because plain silken tofu has a chalky flavor by itself; lemon and vanilla can only go so far to mask it, so I used cashews to add depth of flavor and creaminess.

The pie would be much lower in fat without them, but I haven’t made it that way and can’t recommend that you substitute anything for them. At least the fat comes from natural, whole ingredients, and 6.2 fat grams per slice is a pretty good deal for an occasional indulgence. If you’d like to lighten it up even further, try making it without the crust. 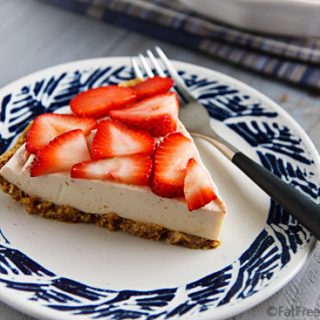 This no-oil, no-bake crust can be a little difficult to get out of the pan, so consider lightly oiling the pie pan first. Dusting the pan with a sprinkling of crushed nuts may also help keep the pie from sticking.
Prep Time 2 hours 40 minutes
Cook Time 5 minutes
Total Time 2 hours 45 minutes
Servings 6
Author Susan Voisin 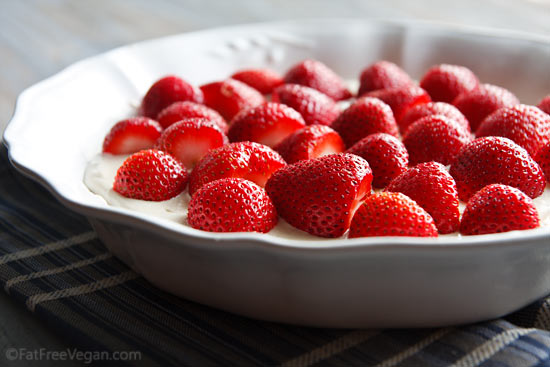 This post contains Amazon affiliate links to the products I actually use. When you buy something through them, I receive a commission that helps support this site. Thanks for your purchase!