This vegan, fat-free brown rice paella is filled with vegetables and is a delicious, healthy version of the classic rice dish. 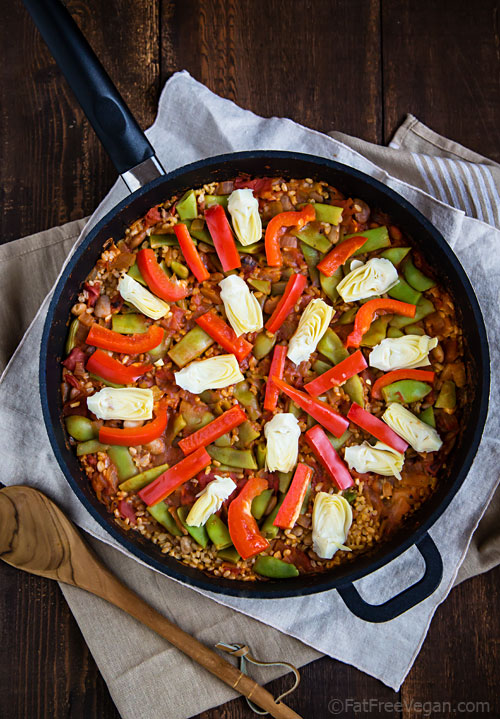 The first time I had paella, I didn’t know it. I had invited my Venezuelan college roommate home with me over a school holiday because, in those days, the dorms completely closed over breaks, leaving the international students with no place to stay. For some reason, my parents weren’t home, and we were left to fend for ourselves. And we were hungry.

As we scanned the fridge for something suitable to eat, my roommate asked if I had rice. Sure, a Louisiana kitchen always has long-grain white rice. “Let me cook you something from my country,” she said, and set about sauteing onions in olive oil and gathering whatever meat and seafood she could find in the fridge. I went off to do something else, and when she called me in to eat, we sat down to a huge pan of reddish rice, filled with bits of meat and vegetables, similar to our local jambalaya, but different. It was amazing.

I’m sure I asked her what it was called, and she probably told me. But it was only years later, when I was living on my own and getting into cooking for the first time, that I realized what it was: a version of the classic Valencian dish paella. 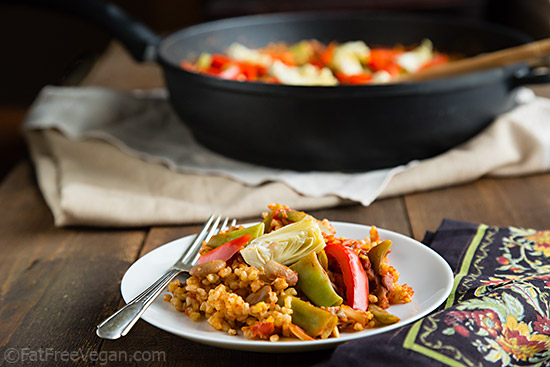 Since then, I’ve become vegan and dropped olive oil from my diet, so that first paella no longer appeals to me. I’ve experimented with vegetarian versions, most notably my Quinoa Paella, but, as purists are quick to point out, it isn’t really paella if it doesn’t contain rice. In my Fatfree Vegan group recently, someone asked me if I had a real paella recipe, and I had to admit that the only one I know uses white rice instead of brown. (Along with olive oil, I’ve also eliminated white rice from my diet; talk about a purist!)

The Secret to Brown Rice Paella

So I set out to create a brown rice paella. I learned from Mark Bittman’s How to Cook Everything Vegetarian that I could substitute brown rice for white in any recipe as long as I parboil it first. That was a revelation and opens up so many possibilities I can’t wait to try.

Bittman included his own simple paella recipe, but it involved putting the pan in the oven, something I couldn’t do because of the type of handles on my favorite pan. So I looked at a few other recipes, most notably this one from a cookbook writer in Spain, to get the basic stove top technique and authentic ingredients. And then I winged it, using frozen flat Italian beans as my principal vegetable and frozen butter beans as my legume.

This makes a huge pan of rice and veggies, so it was a good thing my family liked it (even the resident brown rice resister). I used my 13-inch Berndes saute pan, and this recipe practically filled it up. One thing to note is that the size and shape of your pan affects how quickly the paella will cook. My pan is so much bigger than the eye of my stove that the rice at the edges of the pan cooked more slowly than the middle. I’ve included instructions that are flexible so that you’ll know what to do if you find your rice cooking more quickly or slowly than mine. 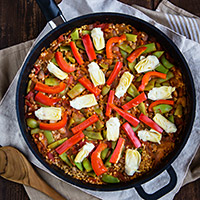 You can substitute other vegetables for the green beans. Just make sure they cook in approximately the same time. Cauliflower, broccoli, and Brussels sprouts, while not traditional, would all work here. This is a mild flavored dish, seasoned the traditional way. If you like your paella spicy, feel free to use hot smoked paprika or add some cayenne pepper, and you can add more flavor by throwing in a little cumin.
Prep Time 20 minutes
Cook Time 1 hour 5 minutes
Total Time 1 hour 25 minutes
Servings 8
Author Susan Voisin

Though it is expensive, there really is no good substitute for saffron. It has a delicate flavor like no other spice. Some people recommend using turmeric or annato to replace the yellow color that saffron imparts, but in this dish, those flavors would be out of place and it would be better just to leave it out. I buy this good quality saffron by the gram from The Spice House (and they don’t pay me to say that!) More information about saffron is here. (Nutrition data is based on using Imagine No-Chicken broth, Muir Glen Fire-Roasted tomatoes, and no added salt.)
Nutrition Facts
Brown Rice Vegetable Paella
Amount Per Serving (1 serving)
Calories 259 Calories from Fat 16
% Daily Value*
Fat 1.8g3%
Sodium 356.8mg16%
Carbohydrates 57.8g19%
Fiber 8.4g35%
Sugar 3.7g4%
Protein 8.3g17%
* Percent Daily Values are based on a 2000 calorie diet.