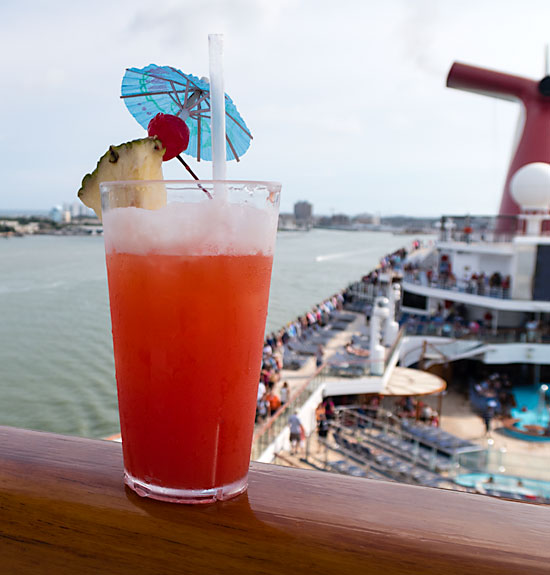 Crusing is scary for most vegans. We’re used to being in complete control of what we eat, and the idea of being trapped on a ship and at the mercy of its cooks prevents many of us from considering taking a cruise. I know I would never have taken a cruise if it weren’t for the fact that my (non-vegan) parents and siblings love to cruise. They’re fans of “floating family reunions,” and I’ve come to agree that cruising is a great way to get the family together without worrying about who’s going to do all the cooking and cleanup. I’ve just returned from my third cruise with my extended family, and I had a great time. And I didn’t starve!

I’ve cruised once before on Carnival and once on Norwegian, and this 7-day trip aboard the Carnival Freedom was my best experience with vegan cruise food so far. I felt that the dining room personnel did a better job keeping track of my “special orders” and of making sure that I was satisfied than on either of the other cruises I’ve taken. For the first time on a cruise, I had dessert, not just fresh fruit. My meal often ended with sorbet, and on a couple of occasions the chef made me a special surprise. 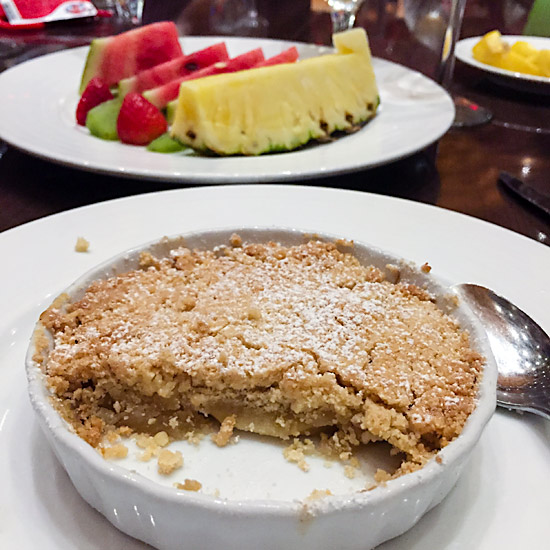 Two desserts for me: A plate of fruit and an apple cobbler

If you’re planning a Carnival cruise in the near future, here are a few suggestions for coming away a satisfied and satiated vegan customer:

Eat in the dining room.

The buffet is chaotic, and finding an employee who knows whether a dish contains animal products or not can be time-consuming. You can usually get a decent salad or plate of fresh fruit, but most of the other dishes are not vegan. I went through the Mongolian Wok line for lunch the first day, and though the ingredients I picked out were vegan and the pan was freshly washed, none of the sauces I could choose from were vegetarian, so my stir-fry was made with just soy sauce. In the dining room, you will be waited on by the same staff every day, who should know you are vegan as long as you follow recommendation #2:

On the first night, tell the waitstaff your food restrictions in very specific terms.

Don’t expect them to know what vegan means. You will need to spell out exactly what you do and don’t eat. They should write down your instructions and have you check over them for accuracy. 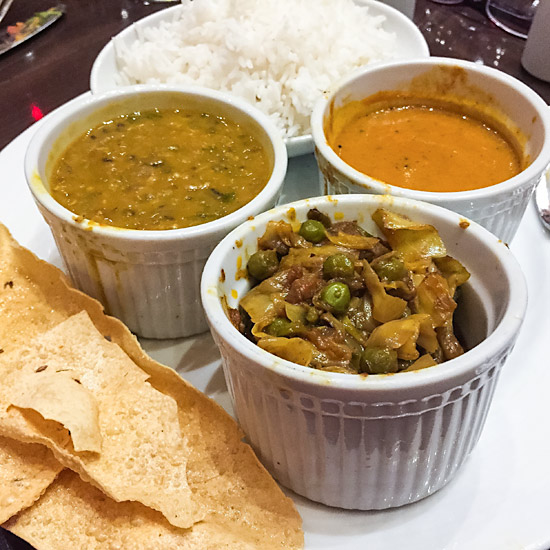 Indian entrees can be veganized

Ask to speak to the dining room host or manager.

You will receive the best service if you involve the host or hostess of the dining room. After I told my waiter about my dietary restrictions, the dining room manager, Diana, came over to go through everything with me. Each night she would show me the next night’s menu and we would come up with ideas for vegan options for me. Often I simply had the vegan version of whatever Indian vegetarian entree was on the menu (Carnival includes one Indian vegetarian option at each dinner, and they are excellent). Other nights I let the chef use his creativity, and he came up with some interesting pasta dishes. Once I was even brought two entrees because the chef was interested to see which one I would like better! 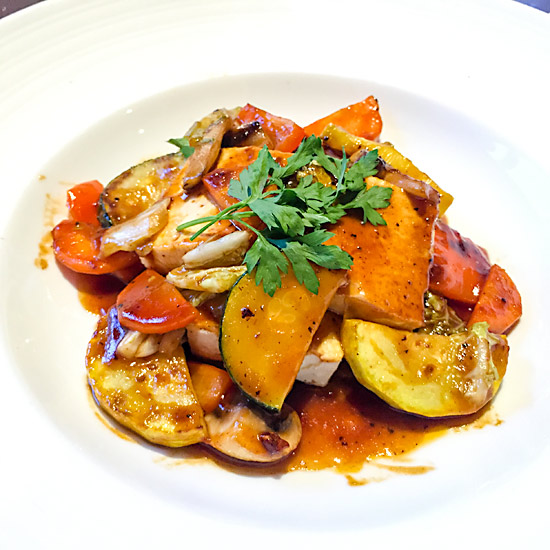 This delicious sweet and sour was served for brunch

Be sure to mention that you will also be eating breakfast in the dining room.

I have to say, breakfast was often the most interesting–and oddest–meal for me. I didn’t realize at first that the kitchen had standing orders to prepare a full vegan meal for me, and the first day I tried to order a bowl of oatmeal. Well, I got the oatmeal and then two more courses. Each meal started with a salad, until I finally told the waiter that I wasn’t really a salad for breakfast type and would prefer fruit. The main course was always tofu and vegetables, either prepared separately or together. The  slabs of tofu were a little underseasoned for my taste, but one morning I received a plate of sweet and sour tofu and vegetables that was one of the best meals I had on the ship. It was just a little strange that it was served at 8:30 in the morning. 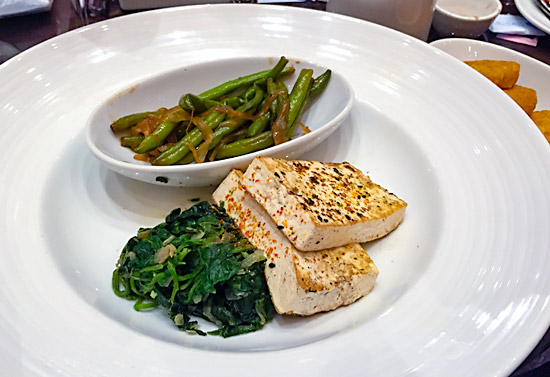 Don’t waste your luggage space bringing your own plant-based milk unless you don’t use soy milk.

I brought a bunch of single-serving soymilks with me and wound up using only one or two of them because the dining room brought me soymilk when I requested it for my coffee. The coffee bar also has soymilk for lattes (but you’ll pay extra for those.) If you use another type of milk, you might want to bring some along. Many ships now have refrigerators in the cabins. 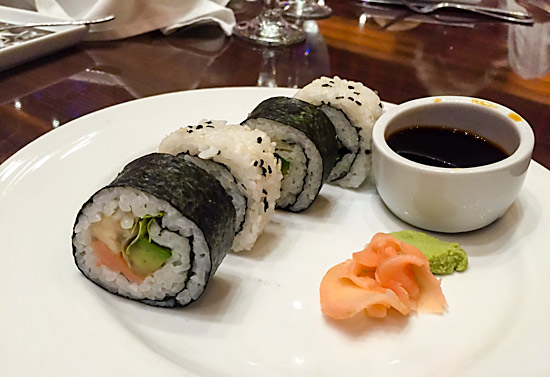 Drop by the Deli counter for a veggie sandwich.

Ignore the menu and ask them to make you a vegetarian sandwich. When I did this the first time, the deli worker first told me that all he had was lettuce and tomato. But as my sandwich progressed, I found he had arugula, onions, peppers, and even sauerkraut available. With a little mustard, it was perfect. They’ll even grill it if you want, but be sure to ask for no butter. (There’s also a pizza counter where I hear you can get a veggie pizza, but it was always too busy for me to try.)

Bring your own Larabars or other snacks if you like to eat between meals.

Or stop by the buffet in the morning and pick up a bowl of fruit to keep in the fridge in your cabin. You’re allowed to bring packaged goodies onboard, but leave anything homemade at home. 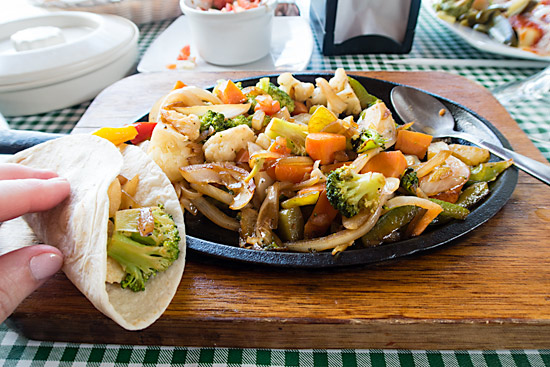 Off the ship, vegan fajitas in Cozumel

Try to ignore all the meat-eating going on around you. And the wasted food.

Actually, this may be the most important thing to consider before you decide to book a cruise. I live in kind of a vegan bubble. My immediate family is vegan, and I spend my time on the internet chatting with vegans. Therefore, it was a shock to be surrounded by people, extended family included, piling their plates high with meat and never once considering a vegetarian option (which, admittedly, are very few on the printed menu.) I saw people ordering two entrees and three desserts and then leaving half that food untouched. People tend to overindulge when the food is “free” (included in the price of the cruise.) If waste bothers you or you don’t want to be surrounded by meat eating, you might not want to take a cruise.

Enjoy a break from cooking and cleaning.

Let go and let someone else take care of you. Look at each meal as an adventure: you will never know what to expect. One night your appetizer will be veggie sushi; the next you’ll receive two soups (I had both pumpkin and asparagus soup in the same meal.) Some meals you’ll love; others you’ll eat because you’re hungry. You can either regret not being in control of your meals or look at it as a vacation from worrying about all that. You’re paying for a vacation, so take it! (But please tip your waitstaff and praise them lavishly in your post-cruise survey.) 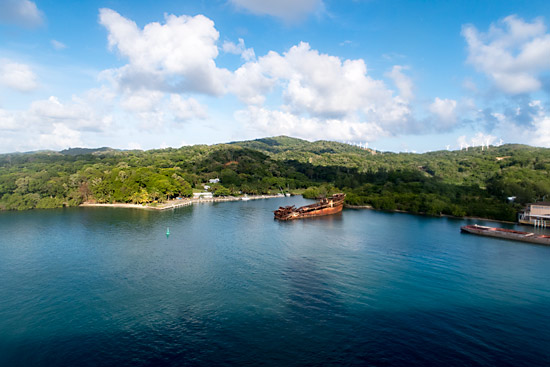 Lovely Roatan, as seen from the Carnival Freedom

All in all, it’s gotten a lot easier to eat well as vegan on a cruise. As more and more vegans opt to take cruises and make their preferences known, it can only get better. Cruise lines will get more savvy about satisfying vegans and chefs will become more skilled. One day, I hope to have vegan pancakes or a tofu scramble for breakfast at sea!

If you want to see more of my cruise photos, join me on Instagram, where I’ll be posting some of my favorite shots. 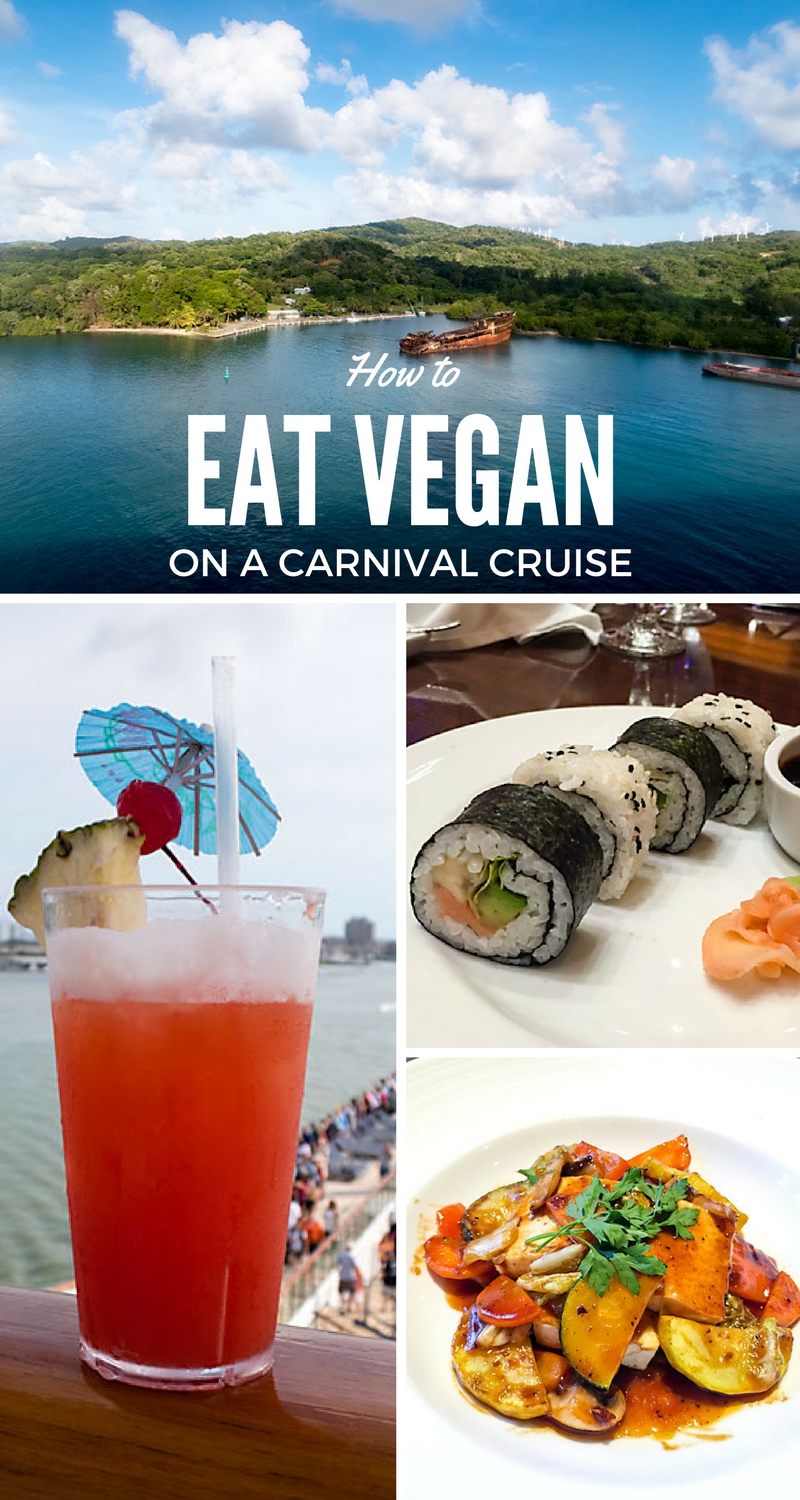