This Instant Pot vegetable soup is a delicious, one-pot meal made very easy by using an electric pressure cooker. 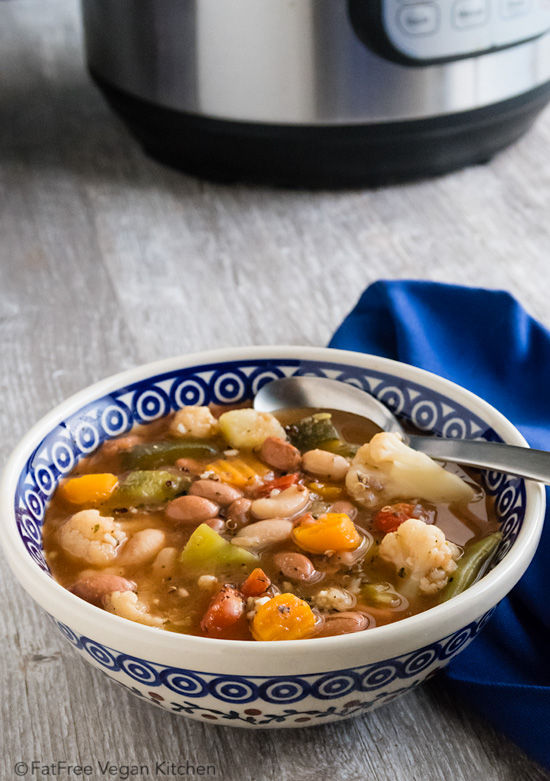 I know it’s been a while since my last recipe, but I’ve been keeping busy. I’ve spent the last few weeks helping my daughter pack for college, sitting on the board of directors of my church, helping to launch a new group for professional women in Mississippi, and adopting a dog. Now, I know that you are duly impressed by all of that, but what you really want to know about is the dog! And so… 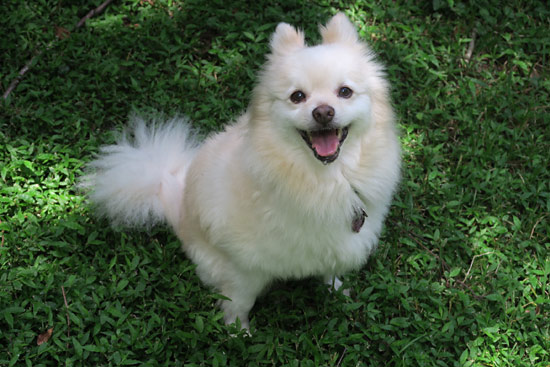 I first saw and fell in love with Herman on Facebook. A friend reposted his photo after it had appeared on the Facebook page of CARA–Community Animal Rescue and Adoption (the same group my daughter E volunteered for in high school). Later that day, E and I tuned in to the local news to see Herman as the Pet of the Week, and we just knew he was meant to be part of our family. We rushed to the shelter, hoping to get there before all of the crowds of people who were sure to want Herman, and we did. Herman turned out to be a sweet, joyful older dog who gets along great with cats (by “great” I mean he totally ignores them).

We were able to bring Herman home with us that day, but not before being told a few depressing truths. Herman has heartworms, and the treatment for them is not easy. He’ll have to be kept quiet for weeks–no activity that could get his heart rate up or cause him to pant. Right now, he’s having some other health issues that we’re trying to get under control before we put him through the heartworm treatment.

Herman has had a bit of a hard life. He was obviously someone’s pampered pet, but he was found close to death after having been attacked by a larger animal. The vet didn’t think he would survive, but to meet Herman is to love him, so CARA insisted on paying for his surgery and treatment. They nursed him back to health and sent him home with an adoptive family–who brought him back a few months later! We don’t know why (he is seriously the easiest dog to care for) but we’re glad because it gave us the opportunity to make him part of our family. He especially loves his sister E.

I have a lot more info and many photos of Herman on my personal Facebook page. His photo album is open to the public, so if you like Herman, you can see more of him here. 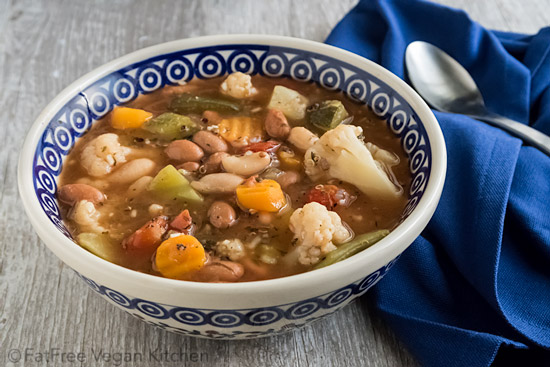 Last month, Amazon had a sale on Instant Pots, and a lot of my readers purchased one through my affiliate link (THANK YOU!) I heard from a few that they were intimidated to use the IP for the first time, and they suggested I write a tutorial or do a video. Well, it’s taken me a while to get it done, but I’ve finally made a video of one of the easiest meals I make in the Instant Pot. I say “meal” because this soup has it all–vegetables, beans, and grain–and is a perfect one-pot meal. It’s a version of my Dirty Little Secret Soup, but using the Instant Pot means I can dump in all the ingredients and walk away until it beeps.

Watch How Easy It Is

Check out my video! From start to finish, it takes about an hour (less time if you use thawed vegetables), but the beauty of the Instant Pot is that you don’t have to stand over the stove, stirring and adjusting the heat. If you don’t have an IP, you can still make this soup with a little extra water, but I recommend following the Dirty Little Secret Soup recipe.

Need more Instant Pot recipes? I have over 50 of them here! 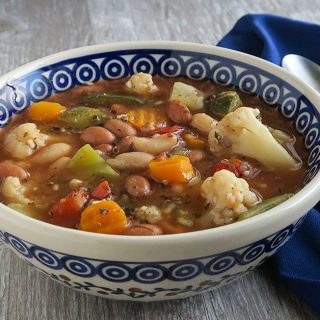 You can use any blend of vegetables you like, including fresh vegetables. I just like the ease and convenience of frozen.
Prep Time 5 minutes
Cook Time 40 minutes
Total Time 45 minutes
Servings 6
Author Susan Voisin

I used the liquid from the canned beans because I find it results in a richer broth, but if you prefer to use water or vegetable broth, drain the beans, measure the liquid, and replace it with water or broth. The slowest part of Instant Pot cooking is waiting for the pot to reach high pressure. Thawing the vegetables beforehand or using fresh rather than frozen will shorten the cooking time. Finally, it's easy to make this soup on the stove, but you should start with 4 cups of water and add more as necessary because more water evaporates in stove-top cooking. This makes 6 average sized servings (about a cup and a half) or 4 meal-sized servings (about 2 1/2 cups each). A large serving is 1 point on Weight Watchers Freestyle.
Nutrition Facts
Instant Pot Vegetable Soup
Amount Per Serving (1 serving)
Calories 201 Calories from Fat 10
% Daily Value*
Fat 1.1g2%
Sodium 693mg30%
Carbohydrates 37g12%
Fiber 11g46%
Sugar 7g8%
Protein 11g22%
* Percent Daily Values are based on a 2000 calorie diet. 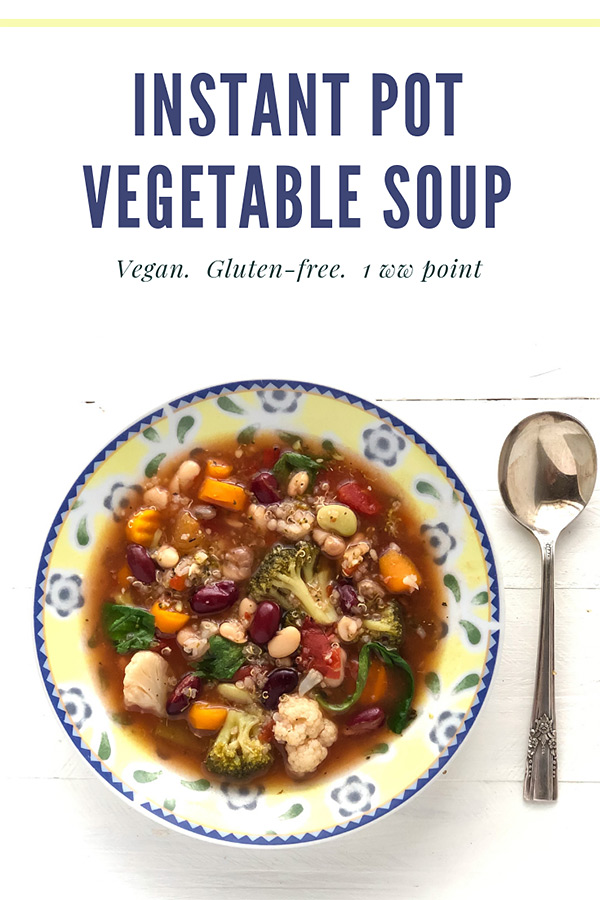