After seeing several recipes that call for French (or Puy) lentils, I bought a bag of them…and then promptly forgot where I’d seen the recipes. So I searched and searched yesterday for some delicious way to cook these interesting looking lentils, but nothing I saw looked like what I had conjured up in my imagination: a hearty, French country-style stew with fresh rosemary and mushrooms and wine. That’s when I realized that I already had the recipe in my head. Why was I looking for something in print to validate my vision? So I set off to the kitchen to cook this stew the way I wanted to, writing down the ingredients as I went. 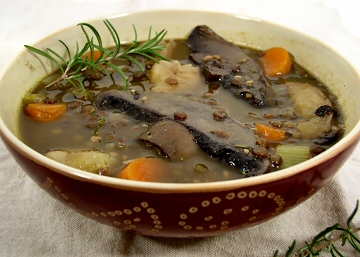 I cooked this early in the afternoon and left it simmering on the stove for a while. One of the neighbor kids dropped by and marveled, “It smells delicious in here.” And indeed, it did!

This would be excellent served with a hearty chunk of bread (unfortunately, we didn’t have any.) I served it alongside some steamed, home-grown broccoli (with cashew sauce). It made a simple, delicious meal.

Now for the Children’s Review: E. loved it! She told me to be sure to add it to the Kid-Friendly list. I even packed some in a thermos for her lunch today.

About the lentils: French lentils hold their shape better than regular brown lentils, but if you can’t find any, brown lentils will work in this too. Just adjust the cooking time as regular lentils cook more quickly.