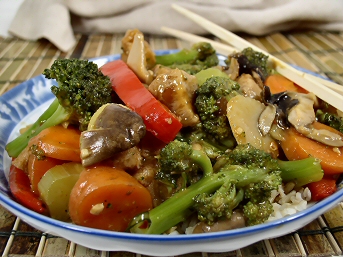 Stir-fries are one of the dishes that my family and I usually have regularly, about once a week. But for the past 3 weeks, we haven’t had it once. Why? This blog. You see, though I know how to make a stir-fry and think I make a pretty darn good one, I don’t use a recipe and I never make it the same way twice. Also, it’s a little difficult to describe how to do it, particularly if you’re not measuring and you’re tossing things in according to taste. I’ve been avoiding making stir-fries so that I didn’t have to write about it here. Crazy, huh?

Until last night. Finally the family (and sanity) prevailed, and I gave in and made a stir-fry. And no, I did not try to keep track of amounts. So I can tell you the basic ingredients I used, but not exact amounts. Here goes.

First of all, I started by burning the tofu. This was not a planned flambé. I like to put baked tofu into my stir-fry, but somehow I put it in the oven and forgot to take it out (probably the fault of that second glass of chardonnay). So don’t do that. (Burn the tofu, that is. You can have a second glass of wine if you want.) The burned tofu did make a passable jerky that my daughter and I snacked on while the meal was cooking.

Since I didn’t have tofu, I went with my second option: TVP. Short for Textured Vegetable Protein, TVP is a soy product that, when re-hydrated in a tasty broth, has an uncanny resemblance to meat. Last night I used a light-colored chunk variety that mimics chicken. To rehydrate it, I take a cup of it, pour about 1 1/2 cups of water or vegetable broth over it, add a little soy sauce and sesame oil, and microwave it, stirring every couple of minutes, until it’s soft. This probably takes 5 minutes, but I never watch the clock. Then I set it aside, keeping it in the liquid, which I will use in the sauce.

I usually use about 2 pounds of veggies for the 3 of us. Last night I used about a pound of broccoli (florets and sliced stems), a couple of carrots, a red bell pepper, a bunch of green onions, and a couple of ribs of celery. I chop them into stir-fry-sized pieces.

I start the stir-fry by putting a little water into my non-stick flat-bottomed wok and cooking a couple of teaspoons of garlic and some minced ginger for a couple of minutes. Then I add the broccoli and carrots (and any other long-cooking veggies I’m using). I put a little more water in the wok (1/8 cup maybe) and cover it to let those veggies steam for a few minutes. (Such is the reality of oil-free cooking: stir-frying is more like “stir-steaming.”)

After I’ve given the long-cooking veggies a couple minutes head start, I add the slower cooking vegetables and stir and cook them until they are tender-crisp. Then I add the TVP (reserve the liquid) and any canned vegetables I plan to use; last night I added straw mushrooms and water chestnuts, but baby corn and bamboo shoots are other possibilities.

Then I add a sauce. Here’s where the measurements and ingredients get really variable. I take whatever seasonings I plan to use and mix them with the TVP water (if I had used the baked tofu, I’d mix them with a cup of water or broth). Last night I mixed a large spoonful of Szechuan sauce, two spoonfuls of hoisin sauce, and an extra dash of sesame oil into the TVP liquid. I mixed that in with the vegetables, and while it was heating I mixed a teaspoon or two of corn starch with a little water. I added that to the pan, stirred, and cooked just until it was slightly thickened.

When I do this right, it all goes very quickly so that the vegetables don’t get too soft. Having the ingredients pre-chopped and right by the stove helps. Skipping that second glass of wine doesn’t hurt either.