I was really excited about the meal I was preparing last night, until I got a call from my husband, in New York on a business trip. He was just sitting down to a meal at Sacred Chow, an all-vegan restaurant in Greenwich Village. He’d ordered three tapas–Orange Blackstrap BBQ Seitan, Mama’s Soy Meatballs, and the greens of the day, brussels sprouts–but there was so much to choose from that he wanted to order much more. (As it turned out, he was too full to order dessert and, he reports, the seitan was out of this world. If you live in NYC–go!) I had to take a break from cooking dinner just to check out the menu (impressive) and reviews (glowing) posted on their website.

Though I was suffering pangs of envy, I got back to work on the recipe I was adapting from Cafe Chimes Cookbook

(a wonderfully inventive cookbook that deserves to be more widely known). I’d decided to make “Baked Tofu with ‘The Sauce'” but to change the seasonings in “The Sauce” just slightly. I also decided to add chunks of pineapple and steamed broccoli and to serve it over rice, an all-foodgroups-in-one-dish meal.

The recipe turned out well, but not exactly as I’d hoped it would. The sauce was delicious, if a little bland. I began to wish I hadn’t substituted sesame oil and ginger for the cinnamon and coriander of the original recipe. And it might have been better to double the sauce and thicken it at the end. But I’m picky, and I was suffering from restaurant-envy. E. totally enjoyed it, even eating a couple of chunks of pineapple, which she doesn’t usually like mixed in with her food. The whole dish was a big hit with her. 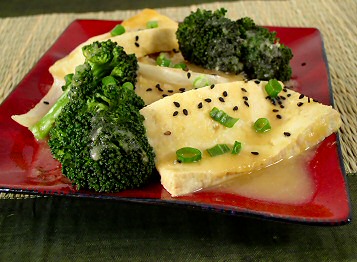 Tofu and Broccoli with Pineapple Sauce

Sauce (put all sauce ingredients into blender and puree until smooth):

1 pound extra-firm tofu, lightly pressed to remove water and cut into 8 slices
1/2 medium onion, cut into thin wedges
pineapple chunks (I used what was left of a 16-ounce can after removing enough for the sauce)
1 bunch broccoli, cut into florets and lightly steamed
sliced green onions and black sesame seeds for garnish
rice to serve

Preheat the oven to 375. Lay the tofu in an oiled baking dish, sprinkle the onion over it, and pour the prepared sauce on top. Cover and bake for 25 minutes. Remove the cover and add the pineapple chunks and bake uncovered for 10 more minutes. (If you want, you can turn the broiler on for part of this time to brown the pineapple slightly.)

Serve by placing the tofu and broccoli over a bed of rice and spooning sauce and pineapple pieces over all. Sprinkle with sliced green onions and sesame seeds.

My notes for next time: Try it with the cinnamon and coriander and freeze the tofu first, as the cookbook recommends. I may also try doubling the sauce so that there’s more to cover the broccoli and pan-cooking th tofu rather than baking. I’ll consider this one another work in progress.