I need to have a list of recipes that didn’t come out as well as I hoped they would. This one would be at the top, but I think that’s my fault, not the writer of the original recipe, Neelam Batra’s.

This may just be one of those recipes that doesn’t work well without fat.

The problem is that most of the spices in this dish are added at the end in the form of a tarka, which Ms. Batra explains is a special flavor-enhancing oil that is added just before serving the dal or lentils. Her original recipe called for the onion to be cooked in 3 tablespoons of peanut oil or clarified butter. I chose to use 1/8 teaspoon of oil and a little water. Consequently, the spices didn’t seem to cook–they tasted a little bitter. I think the recipe would have come out much better if I’d just given up the idea of a tarka completely and added the onion, cumin, and coriander directly to the mung beans. If any of you Indian food bloggers or cooks out there have any suggestions, I’d be glad to hear them! 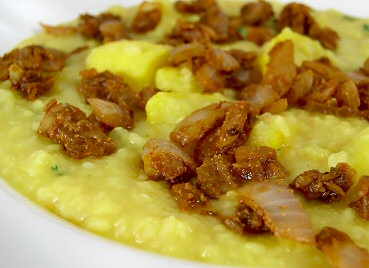 For the Tarka Topping:

Place the bean, squash, water, turmeric, salt, and jalapeños in a pressure cooker. Cover and bring to high pressure. As soon as it reaches high pressure, remove from the heat and allow the pressure to come down naturally. (If you don’t have a pressure cooker, cook it uncovered over high heat with an extra 1/2 cup water until it boils; reduce the eat to low, cover partially, and cook until creamy, 20-25 minutes). When the pressure is released, gently stir in the ginger and parsley and keep warm.

While the pressure comes down, begin making the tarka. Heat the oil in a small saucepan, and cook the onion until medium brown, about 4 minutes. Stir in the cumin seeds and cook for another minute. Add 2 tbsp. water (if using the full amount of oil, skip this) and stir in the ground cumin and coriander. Remove the pot from the heat and add the paprika.

Immediately pour the tarka over the hot dal and stir lightly. Serve garnished with cilantro, if you wish.

Adapted from The Indian Vegetarian.