I love fresh tomato sauce with vine-ripened tomatoes that are cooked for only a short time. But, until the tomatoes in my garden ripen, I’ll make do with canned. My favorite canned tomatoes are Muir Glen Fire-Roasted, the sweetest canned tomatoes I’ve found. They’re more expensive than the store brand, but when you’re cooking something that’s centered around tomatoes, you want them to be as tasty as possible.

This pasta sauce is chock-full of vegetables. I start with eggplant and add summer squash and two colors of bell pepper. Since I planned to serve this over zucchini, I used yellow summer squash in the sauce, but zucchini will work equally well, and other vegetables, such as cauliflower or carrots, can be used instead of eggplant. Figure on using about 2 to 3 pounds of vegetables and get as creative as you want! 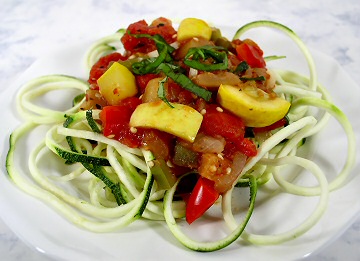 To make zucchini pasta: I use a handy spiral slicer called a Spirooli, which I was lucky to find at a close-out store for next to nothing. A mandolin slicer with a julienne blade will also produce long strands of zucchini “noodles,” and if nothing else is available, a sharp knife and a lot of patience also works. I use about 1 medium raw zucchini per person. After it’s shredded, I simply put the zucchini on a plate and put the sauce on top. The heat from the sauce warms and softens the zucchini slightly and makes a good substitute for people limiting their consumption of refined flours. And here’s a mom tip: Kids love these long strands of zucchini; it’s a great way to get some raw veggies into them.