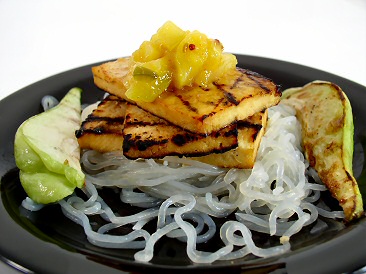 Last night I barbecued in the rain. I had this grand idea to marinate tofu in orange-ginger sauce and cook it along with chayotes on the grill. I was so busy planning what I was going to cook that it never occurred to me to look out the window and notice the dark storm clouds filling the sky like a swarm of angry bees. By the time I noticed the weather, I was too committed to the idea of cooking outside to give up. Besides, once the storm got going, there was a good chance we’d lose power–and the ability to cook indoors. Or at least that’s how I rationalized it.

The storm broke just as I was putting the food on the grill. When the rain began, I pulled the grill from the patio to just inside the screened porch, which quickly became a smokehouse. The wind kept blowing the smoke into my eyes as I blindly tried to turn the pieces of tofu and chayote. Finally, I couldn’t take any more. When the tofu was done, I gave up and brought the chayote inside to finish up in the oven.

I wound up eating dinner with red and stinging eyes and hair and clothes that reeked of smoke. I’d like to say it was worth it, but I’d be lying, big-time. The tofu was good, but perhaps only a bit better than it would have been if I’d baked it in the oven. The chayotes were a problem: I’d originally cut them too big to cook all the way through. When I took the quartered chayotes off the grill, I re-cut each quarter in half and put the slices into a baking dish in the oven for about a half hour. Once they were done, they were delicious, but we had to eat them as dessert, basically, since we’d already eaten the rest of the meal. (Those you see in the photo were underdone and went right back into the oven after their 15 minutes of fame in front of my camera.)

If you’d like to recreate this fiasco meal at home, here’s how you do it, though I strongly advise a visit to weather.com before you begin:

First slice the tofu and marinate it in the Orange-Ginger Sauce (recipe below). Let it soak as long as you can, minimum one hour. Cook it on the barbecue grill and keep it warm until the rest of your meal is ready. (Alternately, bake it for 30 minutes on an oiled baking sheet at 375 F, turning after 15 minutes.) Reserve the marinade.

For the chayotes, slice each one in half and remove the seed from the middle. To halve a chayote, cut straight up through the “crack” at the bottom, like this: 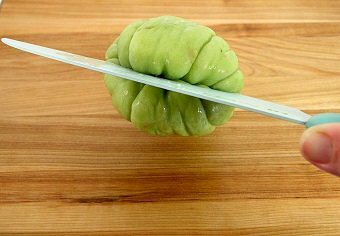 Cut each half into 4 pieces, and sprinkle them with lime juice, freshly ground pepper, and salt, if you like. Grill them until tender, or place them in an oiled baking dish and roast until they’re done (about 30-40 minutes at 375 F).

At some point, take time to put the reserved marinade into a saucepan and cook it until it’s reduced by about half. When the tofu is done, brush each slice with a little of the thickened marinade, but save some marinade to mix with your noodles.

I served this to my family over buckwheat soba noodles that I’d tossed with a little sesame oil, ponzu (orange flavored soy sauce), and the thickened marinade. (My husband and I topped ours with Mango Chutney, but our daughter doesn’t care for chutney.) Since I’m avoiding refined grains, I ate mine on those shirataki noodles that I’ve mentioned before. I used a whole 7-ounce package, which contained less than 10 calories and which was not very filling. This meal was definitely on the light side.

Once the chayote was done, I sprinkled it with a little more lime juice and a Cajun seasoning blend. It has a great, buttery taste that isn’t like anything else. You should definitely pick up some of these wrinkled-bottomed beauties if you see them in your local store.

Mix all ingredients well. Use uncooked as a marinade, or heat and reduce slightly to use as a dipping sauce.