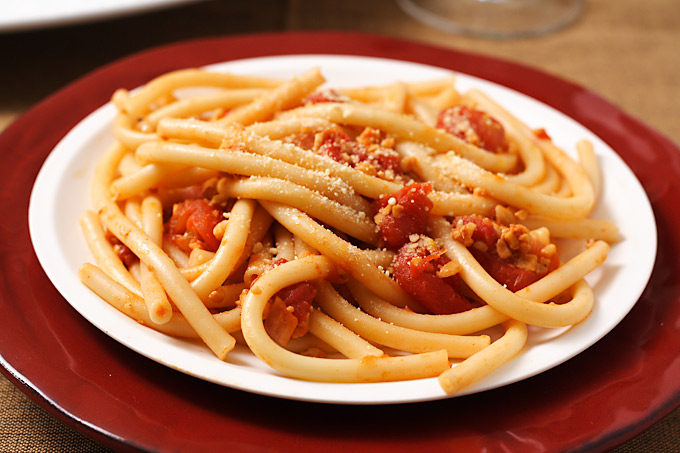 Bucatini all’ Amatriciana is a traditional Italian dish that’s usually made with bacon (or pancetta, I’m told, though I have no idea what that is). I’ve never had it the traditional way, but in my less health-oriented days I used to make a vegan bucatini with [foodies, close your eyes] Bacos. As anyone who has ever been addicted to Bacos imitation bacon bits will understand, that recipe was delicious. There’s just something about Bacos…so smoky, so salty, so….

Okay, I’ll quit drooling. Besides being loaded with salt, Bacos are pretty high in fat. In small amounts as a condiment, they’re fine, but as a main ingredient in a recipe, they’re a nutritional no-no. So I set out to update this family favorite using tempeh instead of Bacos, with limited success. 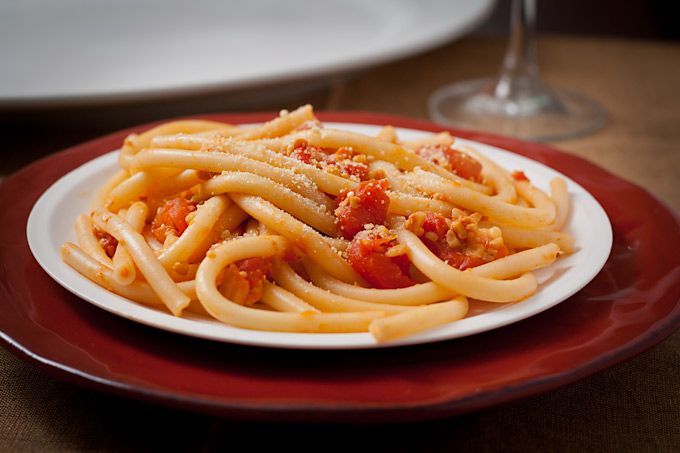 I started out by marinating the tempeh for 15 minutes, but I really think a longer marinating time would improve the taste. Liquid Smoke, which I used to give it a bacony flavor, seems to dissipate during cooking, so I kept adding it while the sauce was simmering. In the instructions below, I say to add it right at the end of the simmering time, to get the full benefit of the smokiness.

Did it taste like the Bacos version? Not really. But this smokey tempeh vegan bucatini was good in its own right and similar enough to remind us of an old favorite that we haven’t had in a long time.

Be sure to check out all my vegan pasta recipes, including: 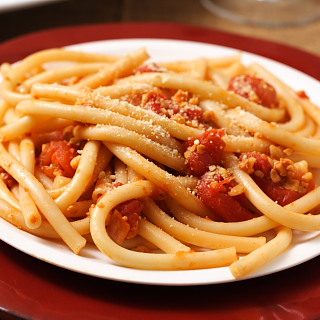