In this vegan, Szechuan-inspired dish, eggplants and tofu are cooked in a spicy garlic and ginger-infused sauce that will make anyone an eggplant lover. 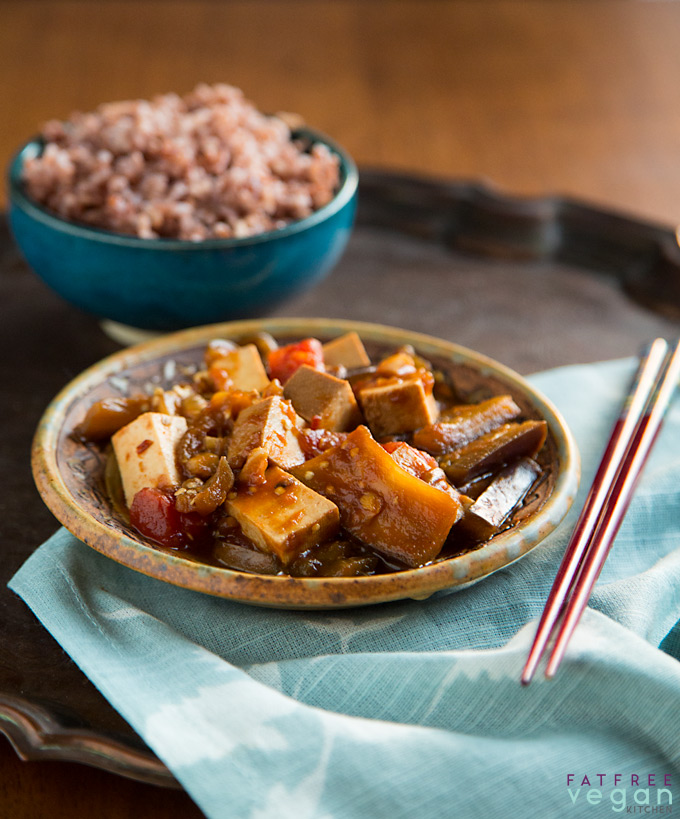 I know some of you are probably tired of seeing eggplant here. Eggplant recipes appear on this blog so often that I could probably change the name to FatFree Eggplant Recipes.

But there’s a reason for that: I love eggplant! I think it’s one of the most versatile vegetables around. If you’ve been avoiding it because you’re afraid you won’t like it, I think it’s time you gave it a try. And this is the recipe you should try. It’s so good that even eggplant haters (like my daughter) like it.

If you’re eggplant-phobic, do as I did and find some smaller, light purple or white eggplants, like the ones in the photo on this page. They are usually denser, less spongy, and less bitter than the larger eggplants. 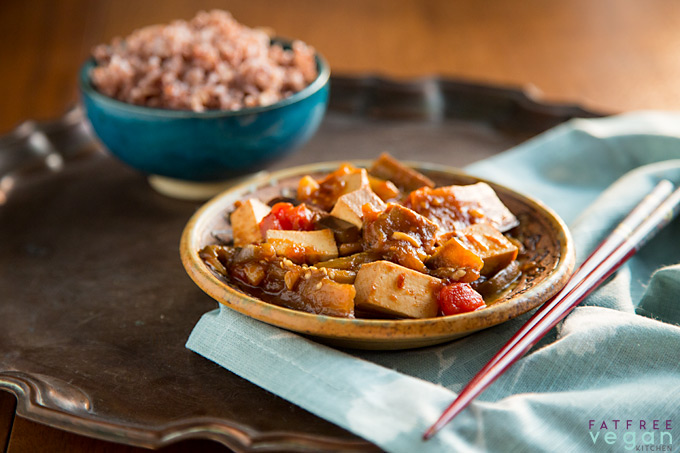 In this recipe, the eggplants are peeled, which makes the texture more appealing to eggplant virgins, but you can also use Japanese eggplants with the skin on. They get soft rather than chewy, so be prepared for that before you chow down. Take a moment to savor the aroma of garlic, ginger, and sesame and then dig in. You will not fear eggplant anymore! 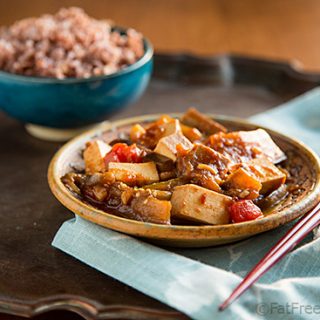 This Szechuan-style dish gets its heat from the chili sauce. Look in your Asian market for chili sauce or garlic chili sauce that has red chilies as its primary ingredient. Try to find the kind with the seeds intact, not the smoother type. Then adjust the amount to your desired level of spiciness.
Prep Time 25 minutes
Cook Time 45 minutes
Total Time 1 hour 10 minutes
Servings 4
Author Susan Voisin

Reduce the sodium by using water instead of broth, regular rice vinegar instead of seasoned, and reduced sodium soy sauce instead of regular soy sauce. *Sesame oil gives this dish its authentic Szechuan flavor. You can leave it out, but the taste won't be the same, so I recommend reducing it rather than eliminating. The nutritional data below includes the full amount of sesame oil.
Nutrition Facts
Eggplant and Tofu in Spicy Garlic Sauce
Amount Per Serving (1 serving without rice)
Calories 187 Calories from Fat 72
% Daily Value*
Fat 8g12%
Sodium 716mg31%
Carbohydrates 21g7%
Fiber 6g25%
Protein 12g24%
* Percent Daily Values are based on a 2000 calorie diet.

Course Main Course
Cuisine Chinese, Vegan, wfpb
Keyword vegan eggplant in garlic sauce
Have you made this recipe?Mention @SusanFFVK and tag #fatfreevegankitchen in your photos on Instagram.
Share on Facebook Pin This Recipe Share by Email

Check out the other eggplant recipes on this blog? There’s a whole section of them! 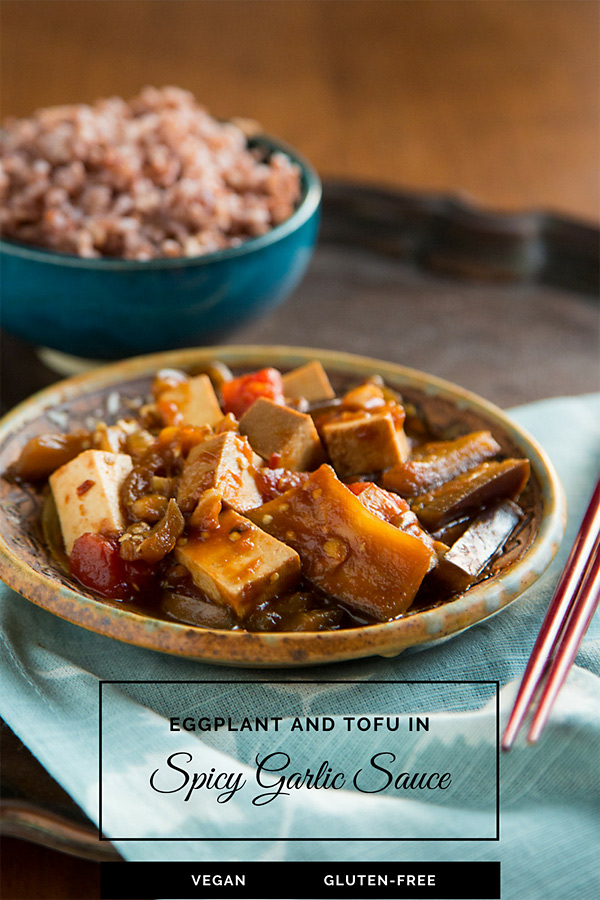