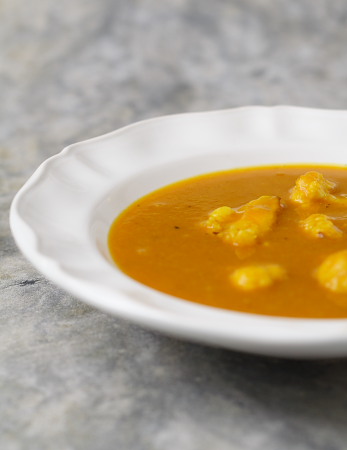 When my daughter was younger, I started calling cauliflower “clouds” and broccoli “trees” in the hope that cute names would make eating her veggies more fun. I really didn’t need to bother because broccoli was always one of her favorite vegetables, and though less-loved, cauliflower was a vegetable she ate readily. Though E. has reached the ripe old age of 9 1/2 and probably doesn’t even remember them, the nicknames still live on in my mind, at least. Every time I cook cauliflower I think of clouds, so when I put together this bright orange soup, I couldn’t help thinking of the florets as clouds bathed in the orange glow of a sunset. 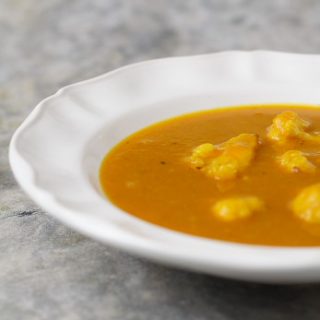 Clouds in the Sunset or Roasted Butternut and Cauliflower Soup

Using good curry powder makes a huge amount of difference. If you like the curry powder you are using, that’s great, but if you often find that your curry dishes lack flavor or taste bitter or “off” in some way, it could be that your curry powder is old. Buying from spice stores, where the turnover is quick, or in small quantities from the bulk bins in natural food stores can help ensure that the curry powder you’re using isn’t months or even years old. My personal favorite mild curry powder is the Maharajah Curry from Penzey’s. It’s more expensive than most because it contains saffron, but every time I use it, I’m happy I ordered it. (No, they don’t pay me–darn it! I’m just a happy customer.)
Nutrition Facts
Clouds in the Sunset or Roasted Butternut and Cauliflower Soup
Amount Per Serving (1 serving)
Calories 234 Calories from Fat 9
% Daily Value*
Fat 1g2%
Sodium 560mg24%
Carbohydrates 58g19%
Fiber 9g38%
Protein 6g12%
* Percent Daily Values are based on a 2000 calorie diet.