Lebanese Couscous (Moghrabieh) adds a chewy texture to this elegantly spiced chickpea soup. If you can’t find it, feel free to substitute Israeli couscous or a whole grain such as farro or pearled barley. 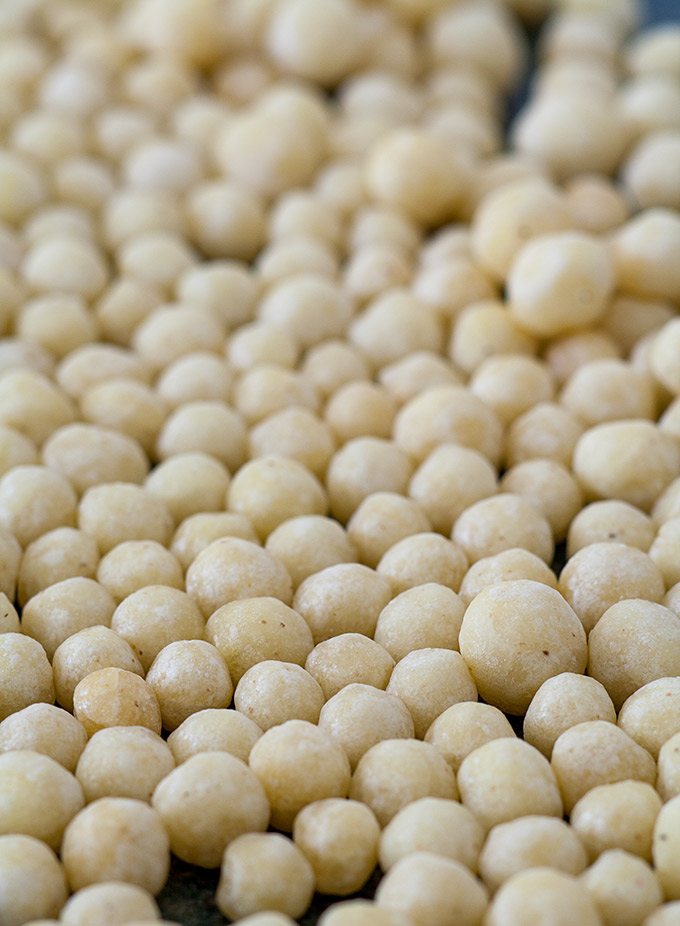 Thanks to everyone who participated in the challenge! Congratulations to lucky winner TheONLYTania, whose name was drawn from the 16 people who answered “Israeli couscous” or “couscous.” (Tania, please send me your address, and I’ll mail you a package.) And while that isn’t exactly correct, it’s close enough.

What you see in the photo is actually moghrabieh, also known as Lebanese couscous, mughrabia, maghrebiyya (and various spellings), pearl couscous, and berkukis. It’s similar to Israeli couscous–in fact, it’s the original upon which the more recently marketed Israeli Couscous is based–but it’s a little larger than Israeli couscous and its “pearls” are more irregularly sized. Here’s what Madhur Jaffrey says about the two kinds of larger couscous in her book World Vegetarian:

Israeli Couscous: This is relatively new on the market and consists of small balls about the size of peppercorns. It is sold by Middle Eastern grocers where is is sometimes labeled Israeli Toasted Pasta, as the balls are very lightly toasted. I like to cook this couscous like most pastas, in lots of boiling, salted water. It cooks in 8-10 minutes….
Lebanese couscous: This also consists of small balls that have been toasted, but they are slightly larger in size than Israeli couscous…. It cooks slowly (taking about 25 minutes) and unevenly and is therefore, in my opinion, best for soups or stews where it turns into pea-sized dumplings….I mention it because you should not confuse it with Israeli couscous. 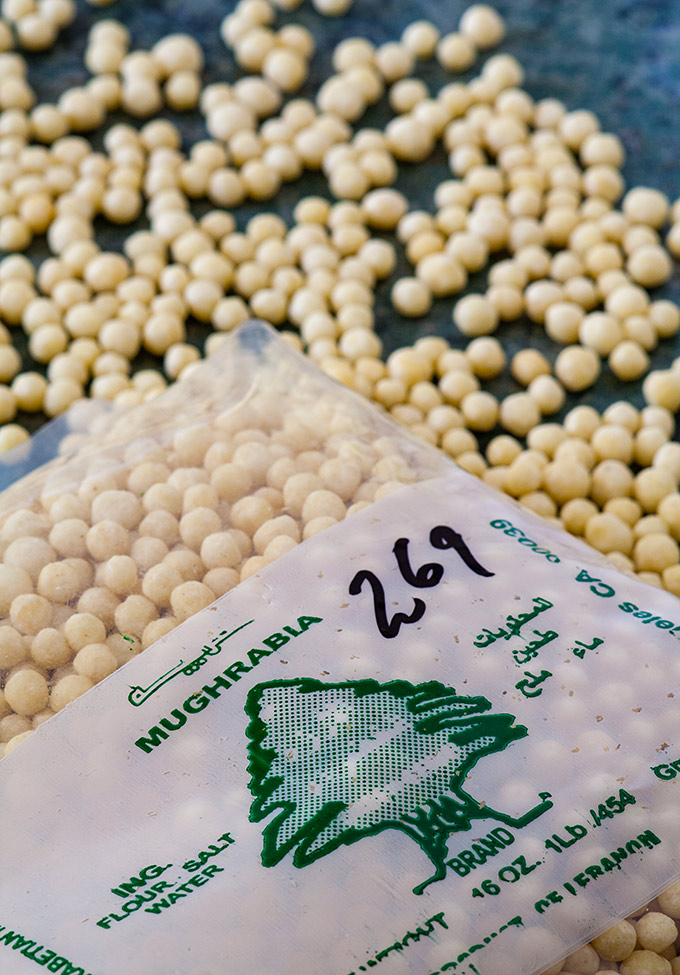 A few weeks ago, I bought a bag of this mystery ingredient at the local Middle Eastern restaurant/grocery not knowing what it was or how to use it. I suspected at the time that it might be Israeli couscous, which has become popular lately on blogs and in restaurants (well, not the restaurants I go to, but those in more happening places than Jackson, Mississippi!) but as I started researching I found that it was slightly different from Israeli couscous. I’d planned to use it in a salad until I read what Madhur Jaffrey had to say. I still have salad plans for it, but just to find out what it tasted and cooked like, I decided to throw it into this aromatic, Moroccan-inspired soup.

What it tastes like is basically what it is: dense, starchy pasta. The first time I made this soup I erred and put way too much moghrabiah into it (1 cup). It was like chewing your way through soup! My husband said that the texture reminded him of “those things in that bubble tea stuff,” so those of you who guessed tapioca pearls were, in a way, not so far off. It’s less gelatinous than tapioca, however, and much more starchy. I decided that in a soup it should be used more sparingly, to provide a surprise chewy texture every now and then, not starch overload, so the next time I made this soup, I cut the amount down to 1/4 cup, which seems about right. You could go as high as 1/3 cup, but I wouldn’t risk more than that. 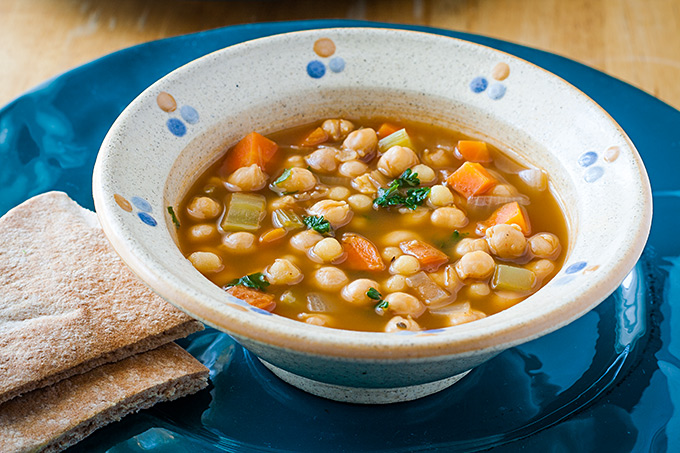 If you look closely at the photo above, you’ll see that the moghrabieh swells as it cooks to almost the size of the chickpeas; the larger pearls were actually hard to tell from the chickpeas. It takes about 25 minutes for them to get to the right softness, but they pick up some of the flavor from the broth as they cook. Fortunately, they don’t seem to break down after the soup is removed from the heat, so leftovers were still tasty, not mushy, the next day.

The soup is very fragrant and highly spiced, redolent of cumin and saffron. I know that saffron is expensive, but it really makes a big difference here: I accidentally left it out the second time I made the soup and noticed that it wasn’t as good as the first batch; when I remembered to add the saffron, all the seasonings fell into perfect harmony. 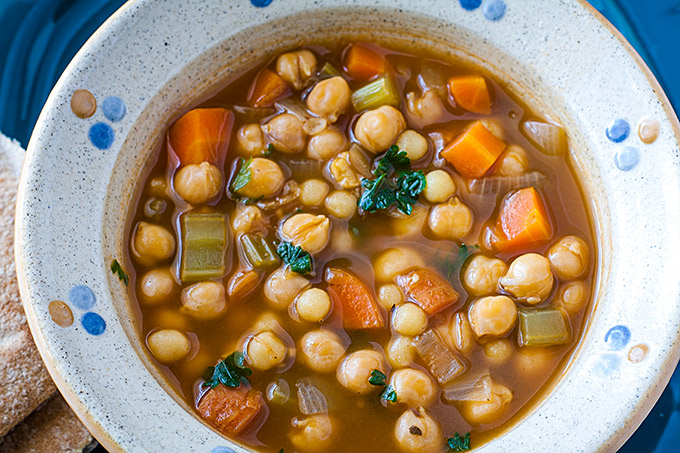 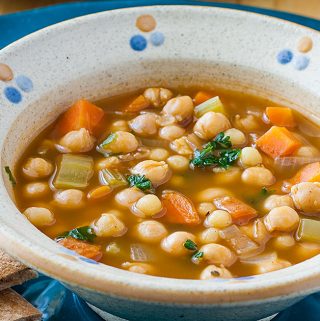 This is a delicious soup, even without the moghrabieh. If you can’t find it, you can substitute pearled barley or Israeli couscous or leave it out completely.
Prep Time 15 minutes
Cook Time 45 minutes
Servings 6
Author Susan Voisin 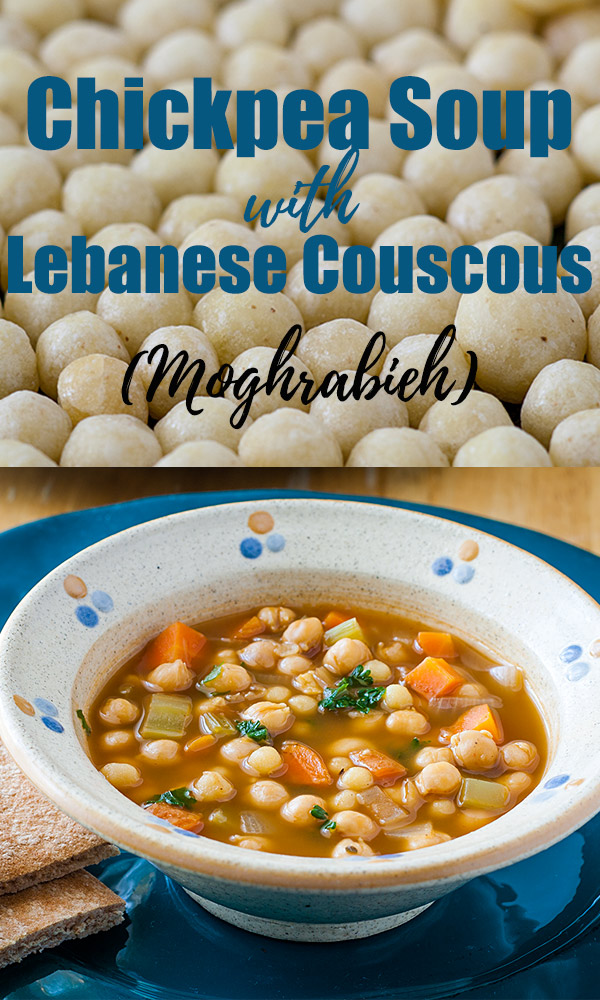