Well, it may not be the most beautiful dish in the world, but my whole family liked this cumin-filled rice, adapted from a recipe by Deborah Madison. It even had E. eating eggplant without even realizing it!

It’s based on the recipe “Cumin Rice with Eggplant and Peppers” in The Savory Way. Since it’s not a vegan book, Madison suggests adding cheese, but I opted to use peas instead. (Hey, at least it rhymes!) The seasonings are mostly the same, but I removed the oil and butter, omitted a red or yellow pepper that I did not have, and used an undrained can of diced tomatoes instead of fresh. The results were delicious. My only regret is that I did not wait until it came out of the oven to add the peas–after 50 minutes of baking, they’re not very green anymore. Oh well. They were still tender and tasty, but I’m instructing you to add them at the end. The heat from the rice will cook them enough and they’ll retain more of their spring-like taste and color. 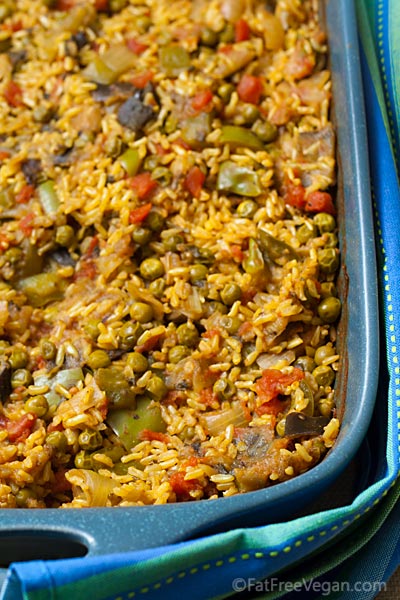 Cumin Rice with Eggplant and Peas

Adapted from a recipe by Deborah Madison.

Suggested accompaniment: Asparagus is back in season, so I served this with a whole lot of simple roasted asparagus. Preheat the oven to 400F. Place trimmed asparagus in a large, oiled baking dish and sprinkle lightly with salt and pepper. Roast, stirring every 5 minutes, for 10-15 minutes, until asparagus are just starting to brown. Heaven!