There’s something about the idea of a recipe “getting away” from me that makes it irresistibly attractive. Twice in the past couple of weeks I’ve found myself sitting in a doctor’s waiting room frantically scribbling down recipes from magazines I don’t subscribe to. (Not that I subscribe to any food magazines; I’d never finish reading an issue of The Nation or The New Yorker if they had to compete for my time with Saveur.) A few weeks ago, while waiting for E. in the orthodontist’s office, I actually asked the receptionist if I could borrow a copy of Gourmet that had too many interesting recipes for me to copy down, and when she said “Just take it–you don’t have to bring it back,” I felt like I’d won the lottery.

Then last week, before the dilating drops had time to blur my vision for the next 6 hours, I managed to copy down two recipes from my eye doctor’s months-old copy of Southern Living. Now, I used to subscribe to SL, and during that entire, unfortunate year, I don’t think I found two recipes worth photocopying, much less transcribing in my rusty longhand. But something about a recipe that might escape sent me digging in my bag for a pen and a crumpled program, upon which I proceeded to scribble semi-legibly over every inch of white space. 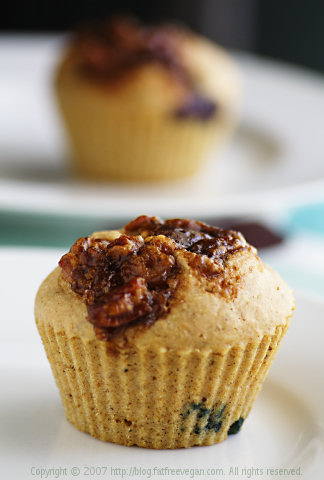 Berries and Spice Muffins is my adaptation of one of those two Southern Living recipes. It’s from the section of the magazine devoted to healthy cooking, so I didn’t have to change the fat content too much, though I did veganize it and change the berries from blueberries to a mixture of blackberries and blueberries (I didn’t have enough of either one on its own). The result was very good; in fact, D. said they were “the best muffins ever.” When I tried to pin him down about what was so good about them, he said it was the spice, not the berries, which were “kind of weird.” I had the opposite experience: I thought the berries were nice but found the muffin itself on the dry side. When I make them again (and I will) I’ll experiment with ways to moisten the crumb without adding more fat and I’ll make them a little sweeter. 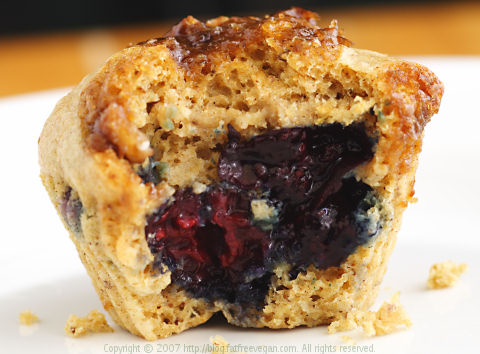 Lovers of sweet muffins may want to add a bit of agave nectar to their finished muffins.