I’ve been afraid of cooking with hummus ever since I had a hummus pizza while on vacation in Colorado last year. The idea sounded good–pizza crust slathered with hummus, topped with kalamata olives–but in actual execution it tasted dry and bland. Perhaps that was the restaurant’s fault because I’ve come around to the idea of hot hummus since making these mushrooms. 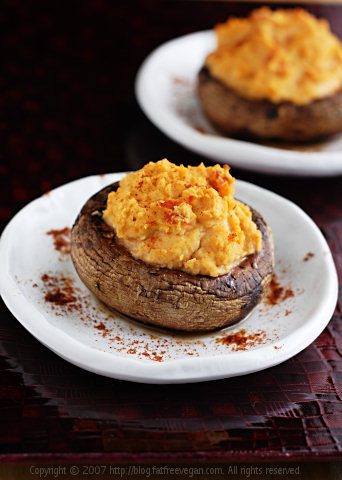 I think it was seeing the Tempeh Bacon-Wrapped Portobello with Baba Ghanoush at Albion Cooks that got me thinking about hummus-stuffed mushrooms. Actually, every time Catherine posts one of her many creatively-stuffed mushroom recipes, I find myself picking up stuffing-sized portabellas the next time I’m in the grocery store. My stuffings are never as fancy as hers. The fanciest I’ve gotten was filling them with Pesto Mashed Potatoes, which was delicious, but hardly beautiful.

This time I opted for a simple filling, something I was making anyway. I make hummus an average of once a week, in an industrial-sized batch that I use in sandwiches, on salads, and with crackers, cruditées, and sometimes just my fingers (but only when I’m trying to get the last bit out of the bowl, I swear!) A few days ago, when I made Gazpacho with Roasted Tomatoes and Peppers, I tossed an extra red bell pepper into the oven to roast, so when I made this week’s hummus, I added the roasted pepper to it. 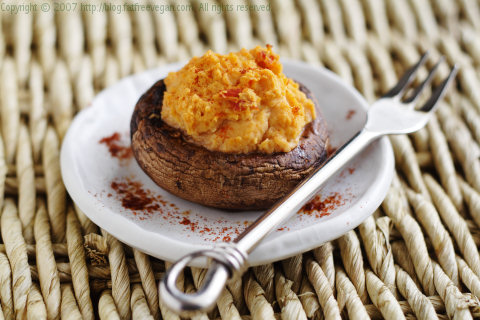 This isn’t a recipe so much as a set of guidelines that you can follow to stuff portabellas with any pre-cooked filling.

If you prefer your hummus cold, you may cook the portabellas without the filling and fill them with it when they are done. Simply follow the cooking directions above, placing them in the baking dish with the cavity side down.

Enjoy these as an appetizer, side dish, or as I did, as a light snack. Delicious!