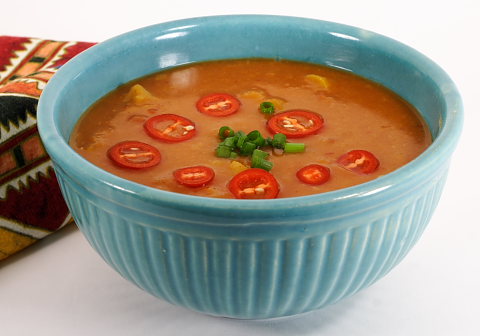 You may recognize the photo above. I first posted about this Southwestern split-pea soup over a year ago, but at the time I was having trouble with the timing of the recipe, so I kept it to myself. Since then, I’ve made it several times, never the same way twice, and it’s always come out delicious. Most recently I cooked it for a potluck lunch and had to substitute for two ingredients I was missing and actually burned the bottom of the pan. But since several people tracked me down to rave about the soup, I figure that this recipe is practically fool-proof. Well, it’s proof against this fool, at least!

I’d waited until the last minute to make my potluck dish, figuring I could throw this soup together quickly in the pressure cooker. Then I ran into a big problem: no yellow split peas. But I had some chana dal–a split relative of the chickpea–and decided to use them instead. From my experience, they take a little longer to cook, so I started them in the pressure cooker and added a couple of minutes to the timer.

While the beans were cooking, I began assembling the other ingredients only to find that the tomato paste I usually use in the recipe was also missing from my cabinet. So I quickly decided to substitute a can of diced tomatoes with green chilies, the kind that is made by Rotel. I have to say that I thought the soup tasted even better with the tomatoes, so that substitution was actually an improvement. And since I really couldn’t tell the difference between the chana dal and yellow split peas, I was sure that the soup was going to be a success…so sure that I left it cooking on the stove and forgot it! The bottom burned and a thick layer of peas stuck to it.

But you know what you do when this happens, right? If you’re lucky, you can pour off the soup at the top, without stirring, scraping, or otherwise disturbing the burned part at the bottom. You may lose a lot of your peas this way, but believe me, you don’t want that burned sludge in your soup. I tried it, and thankfully it worked. I thought I could detect a certain smokiness that wasn’t caused by the chipotles, but fortunately no one else did. Recipe saved! 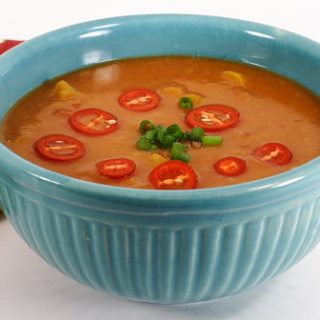 This main-dish soup is comfort in a bowl! My daughter calls this her “favorite spicy food,” but it doesn’t have to be very spicy. Use the mild type of chili-tomatoes and add chipotle peppers only to taste.
Prep Time 10 minutes
Cook Time 30 minutes
Total Time 40 minutes
Servings 8
Author Susan Voisin

Special Note: A couple of commenters (thanks VeggieGirl and Aimee!) let me know that they’ve received the latest edition of VegNews magazine and that I won as the 2007 readers’ favorite veg blog. I’m a little afraid to believe it until I see it myself, so let’s just say that I’m cautiously ecstatic. Whether it’s true or not, thanks to everyone who voted for me; you win my award for best readers! And if you’re here because of the magazine, welcome! I hope you’ll stick around, take a look at the Recipe Index, and especially check out some of my family’s favorite recipes.