Erik Marcus over at Vegan.com has polled the top vegan cookbook writers to come up with the Top 10 Recipes of 2008. He started by compiling a list of ten of the best recent vegan cookbooks, including two that I’ve reviewed here in the last couple of months, Vegan Express and Vegan Fire and Spice, and asked each author to pick one favorite recipe from his or her book. I know one thing: It’s given me some new recipes to try!

Speaking of top 10 cookbooks, how would you like to win one? I have an extra copy of the bestseller Veganomicon, and I really want to share it with someone. Leave a comment below telling what your favorite recipe of 2008 is (just the name and where it can be found is enough), and I’ll have Random.org pick a winner on Friday morning. Comments will close at 10 PM Central time Thursday, 4/24/08, so work fast. And please, if you already have a copy of the book, let someone else win! (It’s a heavy book, so I’m sorry but I can’t send it overseas; North American addresses only.) Sorry! Time’s up! A winner has been chosen.

Now, no blog post is complete without a photo, and since it’s Earth Day, I think it’s fitting to post a couple of photos from my (organic) garden. 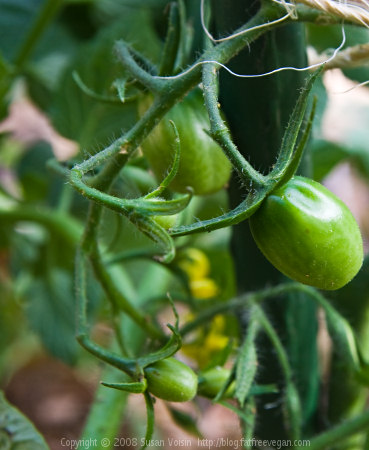 Remember the tomato plant I showed you, the one that was blooming even after being knocked over during a tornado? Well, here’s how those flowers look two and a half weeks later. They’ve miraculously turned into grape tomatoes, and the biggest ones are almost fully grown. After the storm, I just picked the plant up off the wet ground and tied it to a stake to keep it from rotting. I like to think of this as a small example of how the Earth can heal itself if we only make the effort to help it. 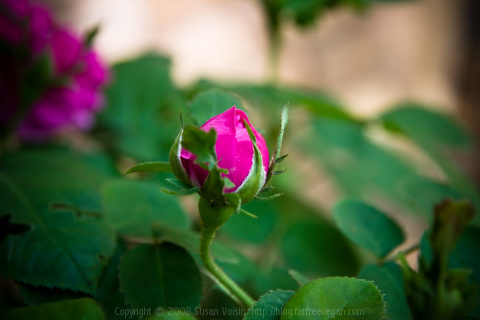 If this rose illustrates anything, it’s that growing things organically is easy. All this rose seems to need is periodic watering and a place in the sun. Other than a little trim in the winter, that’s all I’ve given it, and this year it’s exploding with blooms. Mother Earth gets all the credit.

Happy Earth Day to you all. If you have time to do a little reading, check out these Earth Day posts on other vegan blogs:

Vegan Bits tells us how research shows that eating vegan does more for the environment than eating locally.

Food Snob lists her Earth Day Resolutions for the year.

Living Vegan is celebrating Earth Day by voting in Pennsylvania.

Vegan Vice lists her Earth Day goals and sees some hope for the future.

An Animal-Friendly Life says that eating vegan can, of course, help the environment, but if we want people to stay vegan, it has to be about the animals.

And finally, several Vegan Etsy stores are having Earth Day promotions in their shops, offering discounts and/or donating part of their sales to Earth-friendly organizations. Buy handmade and help the environment!

Don’t forget to check back on Friday to see if you’ve won the book.