Get a double dose of cinnamon with these vegan cinnamon muffins with an extra swirl of cinnamon. They’re so delicious that no one will know they’re oil-free! 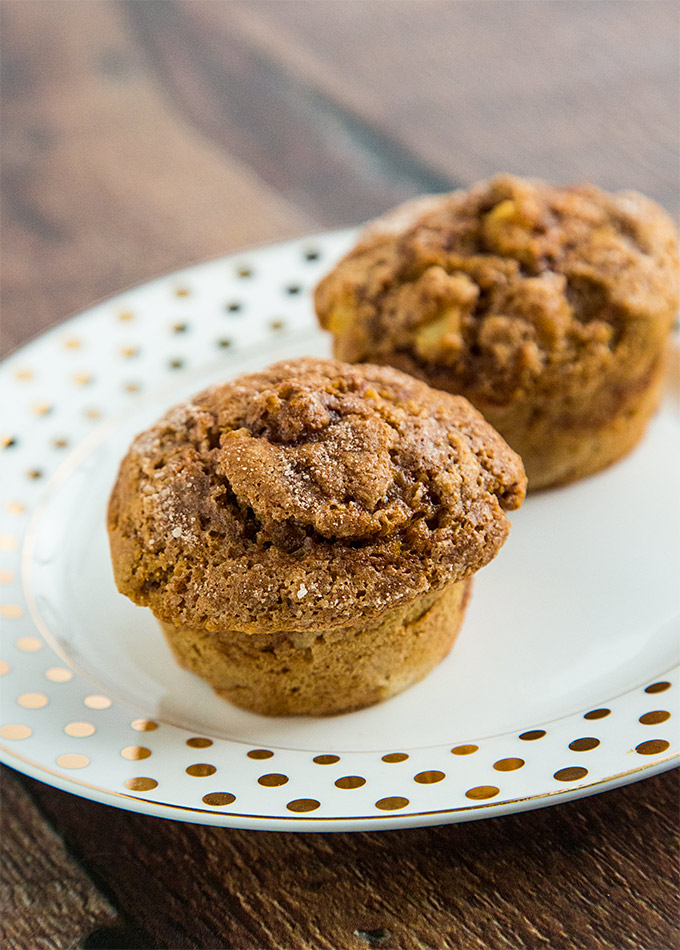 It sounds a little pathetic, but these days the only dinner guests in my house are of the 11-year-old girl variety, so I never get the opportunity to pull out all the stops and make a five-course dinner and blog about it. Not that I’m complaining.

No, I’m more about feeding my family than impressing guests, the rare exception being those Sunday mornings when I wake up and remember that I have some other parent’s child under my roof–and that it would probably reflect badly on me if I let her go home hungry. (I can hear it now: “They only have soymilk and weird brown bread and there are cats everywhere and Mrs. V kept talking about Satan!*”)

So I’m always a gracious host and do my best to feed the little visitors. But when the visitor is used to bacon, cinnamon rolls, and Fruit Loops with whole milk–and my usual breakfast options are oatmeal, smoothies, and whole-grain cereal with soy milk–then we have a problem. Even my special occasion, tofu-based breakfasts of omelets or quiches or frittatas are out of the question when the guest thinks that tofu is “pukey” and wants nothing to do with it, even the deep fried kind in the Chinese take-out she refused to eat the night before.

[Note to parents of E’s friends: This guest-child is a composite, exaggerated for effect, not your little princess. Rest assured that when she spent the night with us, your daughter was a perfect angel, eagerly eating whatever was put before her at the table without making gagging sounds or miming barfing into her lap. Your child has never done that in my house. Really. Almost never.] 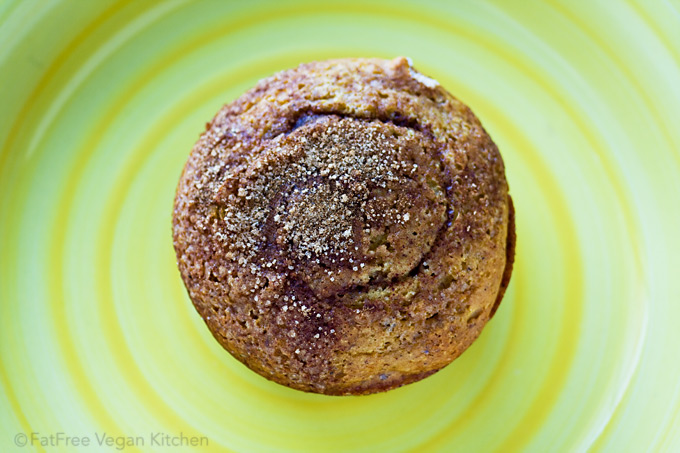 So, to my way of thinking, it comes down to two options: pancakes or muffins. D is more of the pancake maker of the household, so if he happens to be awake (ha!) I’ll usually pass the spatula to him.

I personally prefer making muffins because, frankly, they’re easier. Mix ’em up, pour ’em in, and let ’em bake–no standing over a hot skillet waiting for bubbles to appear. I can be checking my email or reading the Sunday paper while the house fills with the heavenly aroma of muffins baking. They also keep well, so if the rest of the house sleeps for another hour or two, no harm done; I’ll usually save them a couple.

Since I don’t cook breakfast very often, when I make muffins I like to shake it up and try different recipes, never cooking them the same way twice so that I’ll have something new to blog about, something that isn’t made of eggplant. Consequently, I’m never exactly sure that they’ll be edible. Once I tried to make quick cinnamon rolls, adapting a recipe that was on the Vegetarian Times website, but the fat-free vegan treatment just didn’t work for them and they came out misshapen and tasting like cinnamon-flavored dog biscuits. The kids called them Cinnamon Splats and used them to play hockey in the driveway. [Children are such a joy.] 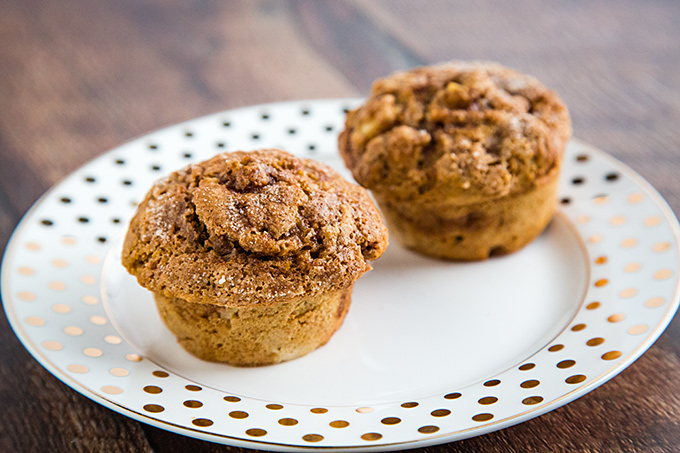 So it was with some trepidation that I tried another cinnamon-heavy recipe, especially since the guest last Sunday morning was the same girl I’d tried to poison with Cinnamon Splats. I managed to be out of the room taking photos of the muffins (just in case) when the rest of the family sat down to eat, so it was only after the fact that I heard that they were, indeed, delicious.

Actually, I didn’t hear that from our guest, but D and E insist that she did, in fact, give them the Omnivore Seal of Approval. I ate mine a little later, after it had been photographed half to death, and I found it very tasty. D and E apparently ate theirs with margarine–so much for fat-free–and E liked them so much that she asked for them again the next morning. (Sorry, they’re all gone, but have you tried my licorice version?) So consider these kid-tested, mother approved.

*The only “Satan” I ever talk about is seitan. But yep, that’s how I pronounce it. 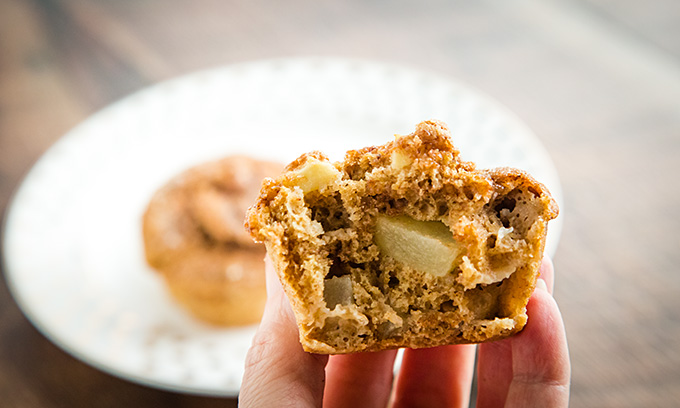 My daughter made these cinnamon swirl muffins the weekend after Thanksgiving with a couple of  changes. We no longer have agave nectar in the house, so she used maple syrup. And she decided to take my reader’s suggestion about the apple and added one peeled, chopped Honeycrisp apple to the batter.

They were AMAZING! She read the entire post before making them and says I really undersold the recipe, and I have to agree. They were moist and tender, sweet and cinnamony, and the apple chunks added a great flavor and texture. I can’t express just how good they were, not just for a fat-free muffin but for any muffin at all. You’ll just have to try them. 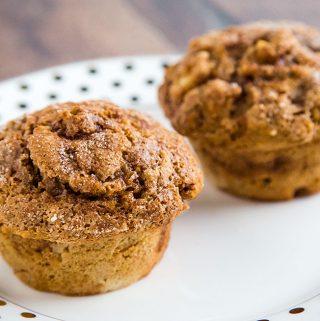 A reader suggested adding chopped up apple to these, and I have to admit it adds a lot to the recipe. But nutritional info does not include the apple.
Nutrition Facts
Cinnamon Swirl Muffins
Amount Per Serving (1 muffin)
Calories 146 Calories from Fat 9
% Daily Value*
Fat 1g2%
Sodium 278mg12%
Carbohydrates 33g11%
Fiber 2g8%
Protein 3g6%
* Percent Daily Values are based on a 2000 calorie diet.

If cinnamon swirl doesn’t float your boat, how about trying one of my other muffin recipes (Cinnamon Splats not included): 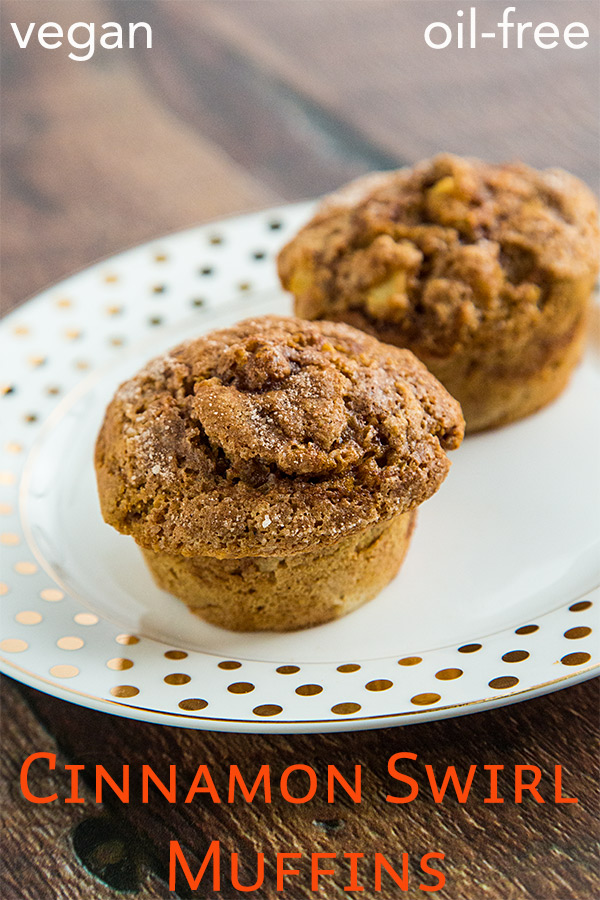