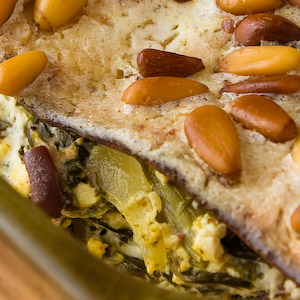 When I saw the Spinach and Matzo Pie recipe in this month’s Gourmet, I thought, “Wow, an easier way to make a spinach pie! No fooling with thin sheets of phyllo, just lay down some matzos instead.” I figured it’d be a snap to take my Spinach and Artichoke Pie and just substitute matzos for the phyllo. But then I read the recipe.

Since matzos are on the dense side, the Gourmet recipe would have you soak them in a mixture of cottage cheese, whole milk, and eggs for 15 minutes before picking them up and layering them in the baking dish. Never mind that I wasn’t planning on using any of those ingredients; I just couldn’t imagine picking up soaking wet matzos, which are basically thick crackers, and being able to transfer them intact to the baking dish. But since there wasn’t that much liquid in my original recipe, I also couldn’t imagine them getting soft enough if I didn’t add some more moisture.

In the end I wound up with a recipe that bears little resemblance to either Gourmet’s recipe or my old recipe. Instead of cottage cheese and eggs, I used a mixture of Toffuti cream cheese and soymilk, and instead of the feta that tops Gourmet’s pie, I used pine nuts. I stuck with the seasonings of my original recipe–oregano and cumin–and skipped the dill in Gourmet’s (besides the fact that we’re not big fans, I had no fresh dill on-hand). The result is this delicious, though not really easy-to-make, main dish. 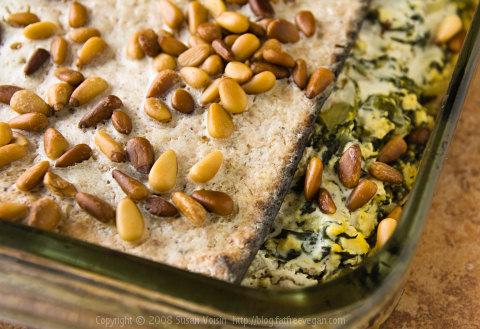 A Couple of Caveats

The addition of vegan cream cheese and pine nuts takes this out of the realm of low-fat eating and right into feast-food territory. If you want to cut the fat, I suggest sticking with my Spinach and Artichoke Pie. Or, if you want to avoid the problem of soaking the matzos altogether, try using matzo meal instead and skip the Tofutti mixture. For a gluten-free version, try using either gluten-free bread crumbs or crackers.

I should also mentioned that though the Gourmet recipe was kosher for Passover, this one is not: The soy products make it off-limits for anyone observing the Passover dietary laws. (I took this to a Unitarian-Universalist Seder where, like most things Unitarian, anything goes.) I was unable to get a photo of it once it was cut, but you can see an important detail in the photo below: the matzos don’t reach all the way to the edge of the pan, so keeping it intact after cutting is nearly impossible. For a beautiful presentation, phyllo dough wins hands-down. 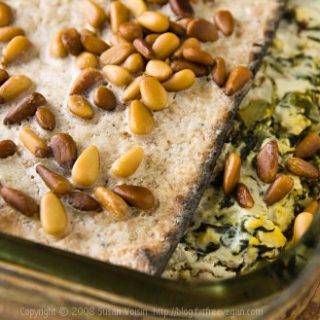 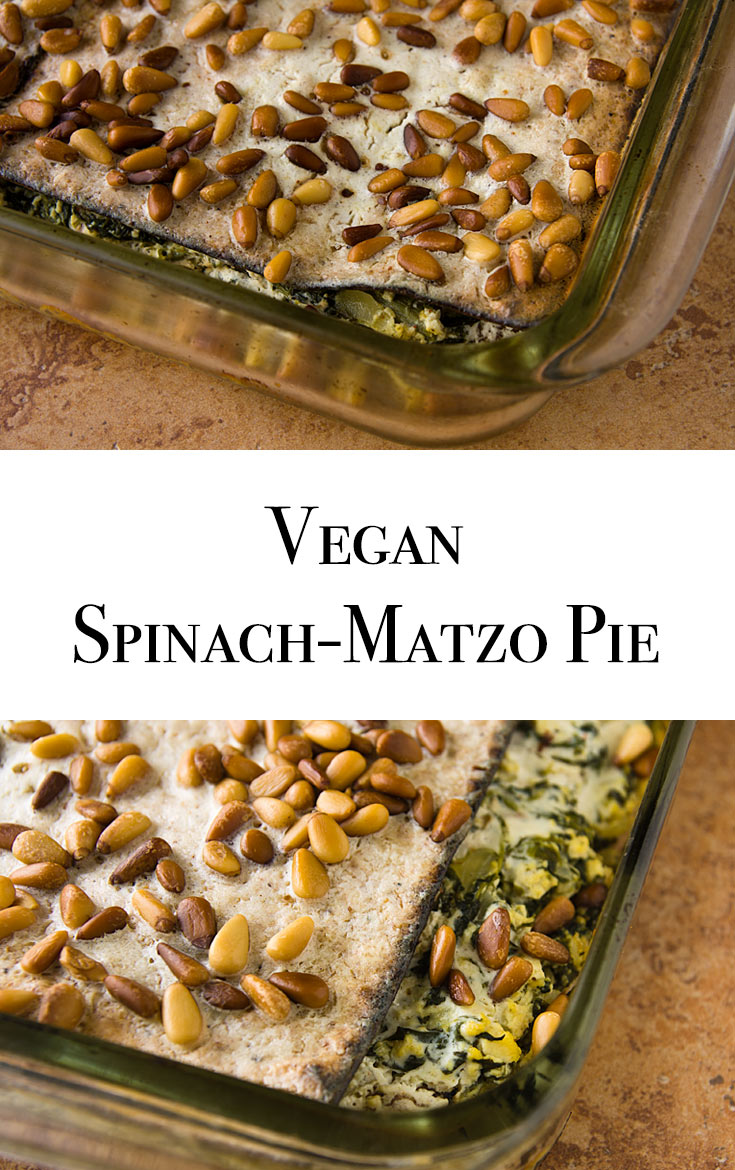