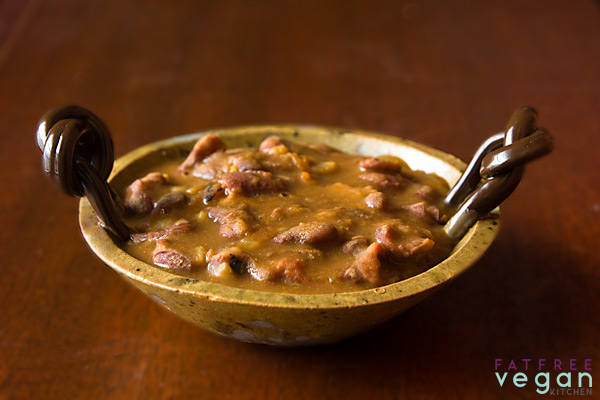 Have you ever picked up a cookbook and opened it right to the page with the perfect recipe, the one that exactly suited your mood and for which you had all the ingredients? No? Well, neither have I. Normally I pour over multiple cookbooks, imagining this recipe and that–or this recipe combined with elements of that–but I never just pick the first recipe I come to. Until yesterday.

I was all set for a long perusal of Neelam Batra’s The Indian Vegetarian, a book which miraculously had no torn bits of paper or sticky notes marking its pages. I settled into my comfy chair, sipped my coffee, and allowed the book to fall open, to page 266 as it happened: Kidney Beans in a Curry Sauce on the left, Black-Eyed Peas with Garlic and Scallions on the right.

I was immediately drawn to the kidney bean dish because it sounded a lot like an Indian version of my home-state comfort food, Red Beans and Rice. I checked over the list of ingredients, and except for fresh ginger, I had all the ingredients. After a 15-minute trip to the nearby Indian grocery, where the ginger is the freshest in town, I had everything I needed for a complete Indian dinner, including a package of onion naan, brown basmati rice, and tender young okra to be roasted with curry powder.

I took several liberties with the recipe, including leaving out the 1/2 cup of cilantro which Ms. Batra adds to the beans along with the ginger. (I’m one of those people who doesn’t like cilantro, though I have been training myself to tolerate it in small amounts as a garnish; feel free to use it if you like.) I also changed the cooking method of the beans, omitted the oil, and adjusted the seasonings a bit. My dish, while still mild, may be a little more highly spiced, but I think it’s true to the flavor and style of the original–simple home-cooking, the kind that’s universally comforting, nourishing, and delicious. 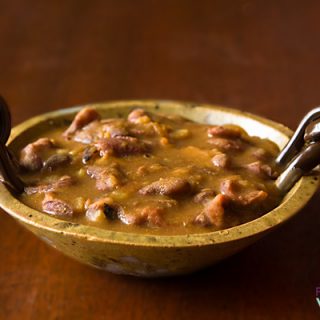 I’m sure you could use canned beans instead of cooking them from dry. I would probably start with step 3 and add the ginger with the garlic and put 2 cups of water into the sauce. Then I’d add 3 or 4 cans of kidney beans that had been rinsed and drained. Simmer for about an hour, adding water as needed. I don’t think they’ll break down or get as soft as dried, but if you want, you can mash some of the beans to thicken the gravy.
Nutrition Facts
Rasedar Rajma (Kidney Beans in Curry Sauce)
Amount Per Serving (1 serving)
Calories 240 Calories from Fat 9
% Daily Value*
Fat 1g2%
Sodium 386mg17%
Carbohydrates 44g15%
Fiber 17g71%
Protein 16g32%
* Percent Daily Values are based on a 2000 calorie diet.

By the way, my husband insists that Black-Eyed Peas with Garlic and Scallions should be the next thing I cook from this book, and if I can get around the whole cup of cilantro it uses, I just might give it a try.