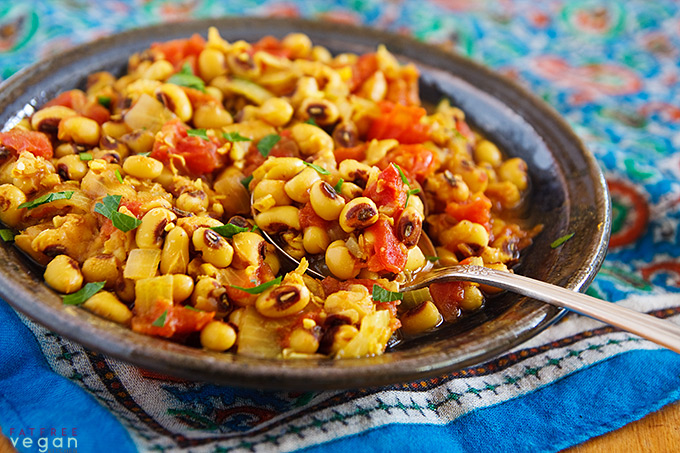 Welcome to 2010! It’s a new decade as well as a new year, and perhaps because of that, more people than usual are making resolutions to eat healthier.

I tend to take some liberties around the holidays; I’m sure you’ve noticed that some of my most popular holiday desserts (like the cheesecakes) don’t live up to this blog’s title and are not oil-free. I like to indulge myself for a couple of weeks and then settle down to “regular” food.

So if you’re looking for healthy recipes to start the new year–or to start you on a vegan diet–you’ll find everything you need here: delicious recipes that contain no oil or animal products and many that contain little or no sugar, flour, or gluten. Many of my recipes have labels for certain ways of eating, such as Eat to Live or Weight Watchers points. 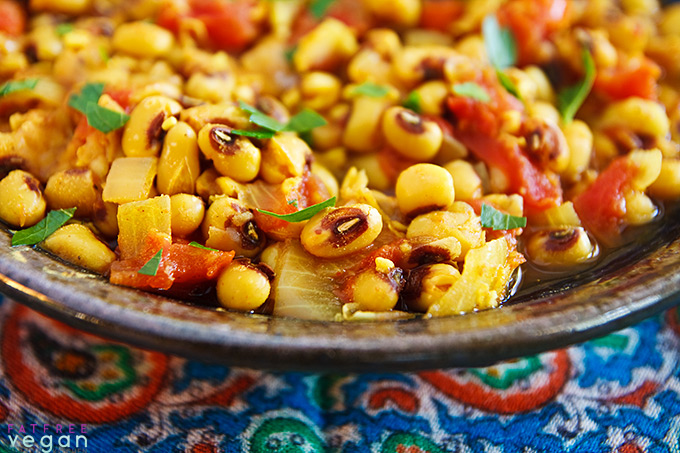 This year’s first recipe was inspired by a Christmas gift from my husband, Monisha Bharadwaj’s India’s Vegetarian Cooking: A Regional Guide.

It’s a gorgeous book which, though often lacking in cooking times, contains a wealth of information about the different regions and cuisines of India as well as recipes that are mostly vegan and, often, lower in fat than traditional Indian recipes. I’ve been curling up with it like a novel at night, so it was natural that I turned to it for inspiration when I needed a black-eyed pea recipe to usher in the new year.

It’s a Southern US tradition to eat black-eyed peas and greens on New Year’s Day to ensure a lucky and prosperous year, and while I don’t really believe the superstition, I go with it partially out of sentimentality but mostly because I like black-eyed peas. For the past few years, I’ve been trying to reach beyond the Southern-style black-eyed pea dishes that I grew up with and look to other cultures where the Cyclopean peas are at least as popular as they are here. Last year it was Moin Moin from Nigeria and this year it’s Black Eyed Pea Masala from northern India.

This adaptation of Bharadwaj’s Bhuna Lobhia is my family’s new favorite black-eyed pea recipe. As it was keeping warm on the stove, my daughter keep creeping up to the pot to “sample” it, long after the seasoning had been checked and it didn’t need to be sampled anymore. And I have to admit, I was doing the same thing. It’s irresistibly good.

To complete my New Year’s obligations, I served this with (Green) Cabbage and Peas with Cumin and Mustard Seeds. We all feel lucky already. 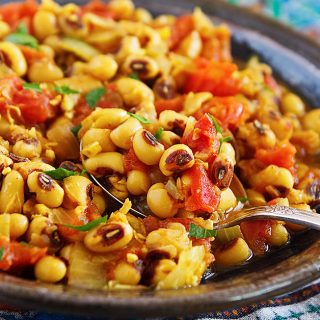 Garam masala is a spice blend that is best when made from whole seeds just before using. That said, if you have a packaged blend that you like, you can, of course, use it here. Here’s the garam masala blend I used in this recipe: 1 tsp. cardamom seeds (from green cardamom pods)
1 small cinnamon stick
1 tsp. cumin seeds
1/4 tsp. cloves
1 tsp. black peppercorns Toast lightly in a dry skillet over medium heat until fragrant (be careful not to burn). Remove from heat, cool, and grind in a coffee grinder or spice mill. Use immediately or seal tightly and use soon. Makes about 1 tablespoon. **** This dish is zero points on Weight Watchers Freestyle program.
Nutrition Facts
Black-eyed Pea Masala
Amount Per Serving (1 serving)
Calories 178
% Daily Value*
Sodium 517.1mg22%
Carbohydrates 32.8g11%
Fiber 5.8g24%
Sugar 7.1g8%
Protein 11g22%
* Percent Daily Values are based on a 2000 calorie diet. 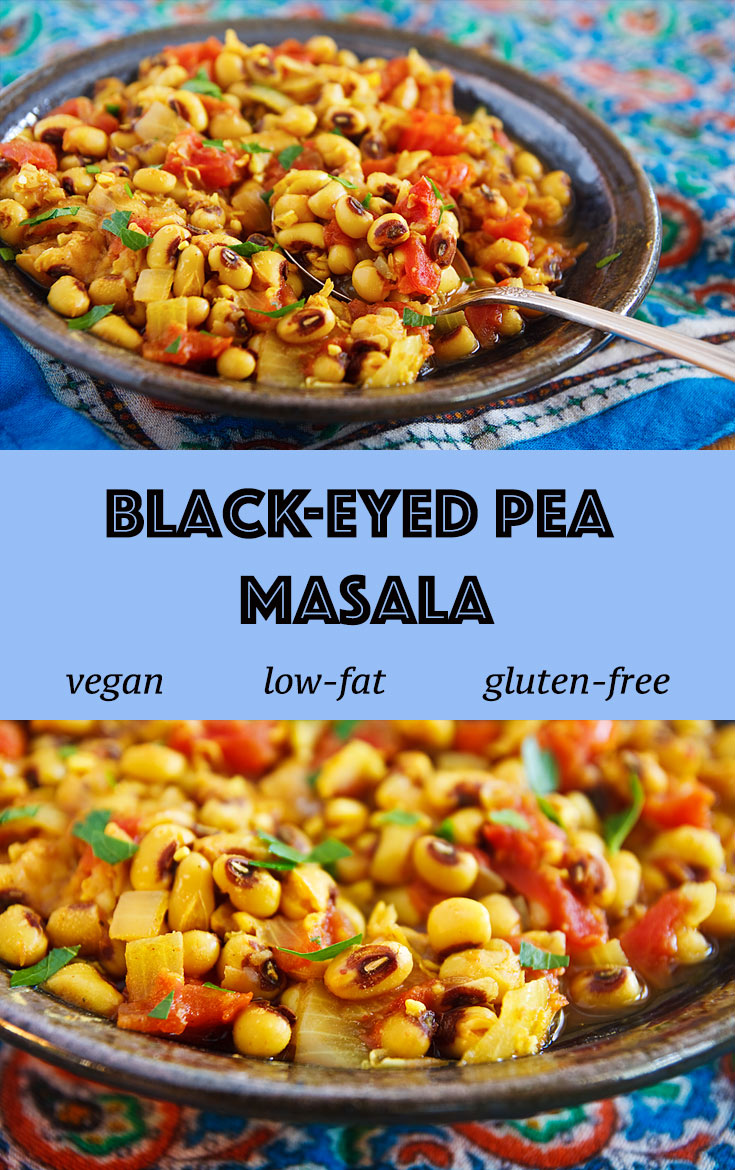