Rich and creamy, this vegan potato soup has no added fat and can be made in minutes in a blender. It’s perfect as a light meal or a first course. 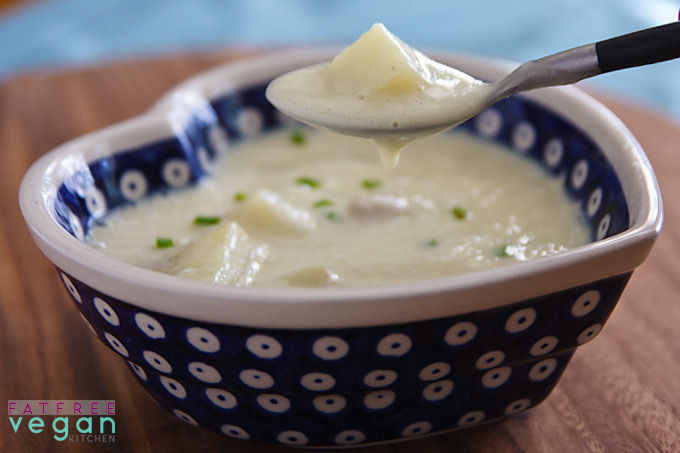 When I first wrote about my new love, my VitaMix blender, and mentioned that my daughter was making herself a batch of potato soup every day after school, I figured it wouldn’t be long before I posted the recipe. To tell the truth, it’s such a simple one, adapted from the VitaMix cookbook, that I decided to hold it in reserve for a time when I didn’t have anything new to post.

Well, that time has come. Lately my cooking muse must be on vacation, so while I’m waiting for her to drag her suntanned bee-hind back home, I’ve been relying on a lot of old standards (mostly of the Ridiculously Easy variety) to keep us fed.

On nights when I just want to clean out the fridge, I do a vegan version of the old “meat and three veg” where the “meat” is a simple bean or tofu dish and one of the three vegetables is a light soup. Last night’s meal, for instance, consisted of baked tofu, roasted asparagus, salad, and potato soup—hardly gourmet, but somehow elegant in its simplicity. 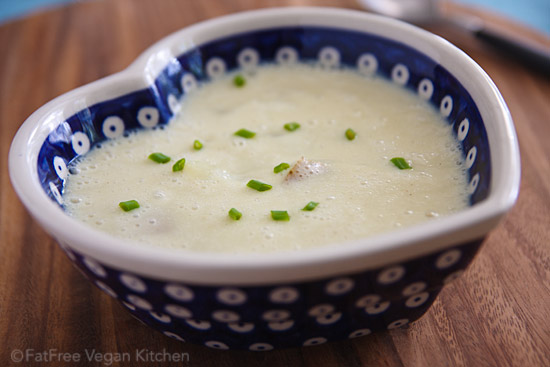 I’ve mentioned before, I’m sure, that I have no compunctions about using the microwave oven to speed up meal prep. Using it to cook the potatoes and the VitaMix to cook the soup as it blends means that this soup is ready in about 12 minutes. (When I’m planning ahead, I use the Instant Pot to make a whole batch of potatoes for future use.)

On really rushed nights (and is there any other kind?) I can be serving this potato soup as a first course while the vegetables are roasting in the oven. I usually don’t even bother to peel the potatoes because blending completely pulverizes the skin, but including the peel makes the soup a sort of gray-green color, so if you want your soup to be creamy white like in these pictures, you’ll need to peel your ‘taters. Just let them cool a little so you don’t wind up with scorched fingers like I did!

Watch How Quick and Easy It Is:

Check out my video to see how quickly you can be enjoying this soup!