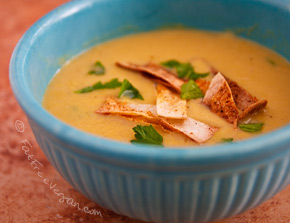 I was a little hesitant to post my last recipe because it used a big honking blender that cost more than my first car. Never mind that I feel somewhat embarrassed about spending so much money for a blender; I was mostly worried that people would tune out at the first mention of such an exotic appliance. But what I didn’t know was how many of you already own a souped-up blender and are interested in recipes written specifically for it. Well, I found out! In your comments and emails you made it very clear that you’d like to see recipes using the Vita-Mix (and other high-powered blenders) become a regular feature on this blog.

I’m happy to oblige, with one caveat: The recipes have to be doable without a Vita-Mix, too. It goes against my egalitarian nature to promote recipes that can’t be created with basic kitchen appliances, so if you’ve got a regular blender or food processor–or even a food mill and really strong biceps–rest assured that you’ll still be able to enjoy this and any other Vita-Mix recipe I post.

Now, about this recipe. I used corn in three forms to create a soup that’s different from anything I’ve ever had. Its base is blended corn kernels (I used frozen and didn’t even bother to thaw them); masa (finely ground corn flour) is added for thickening; and corn tortillas add texture and crunch. The result is a very corn-centric taste that’s slightly spicy and surprisingly cheesy. I served it alone, as a starter-course soup, but I also think it would make a good, hearty main dish soup with some pinto beans, diced tomatoes, or cooked vegetables mixed in. 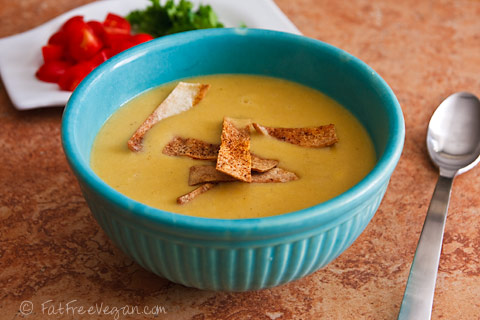 In a heavy saucepan, sauté the onion until it is lightly browned. Add the garlic and cook for another minute.

Scrape the onions into the blender along with the corn, 2 cups of vegetable broth (Vita-Mix users may use all 3 cups), cumin, chipotle, masa, and nutritional yeast. Blend until very smooth.

High-Powered Blender Users: Continue blending at high speed for 4 to 5 minutes, until soup is steaming hot and bubbly. Add salt to taste. Soup is ready to serve.

Regular Blender Users: Pour the blender contents back into the saucepan, add the remaining 1 cup of broth, and simmer on very low until soup is thick and bubbly, about 15 minutes. Watch closely and stir often to prevent scorching. If it becomes too thick, add more broth. Add salt to taste.

While the soup is cooking, make the tortilla chips. Preheat oven to 400F. Cut the tortillas in half and then each half into strips about 1/2-inch wide. Place them on a cookie sheet, spray lightly with 1 quick spray of canola oil (optional, but helps seasonings stick), and sprinkle with salt and chili powder. Bake until light brown and crunchy, 5-10 minutes. Stir once, halfway through, and watch closely to prevent them from burning.

Serve the soup in bowls, garnished with chopped parsley. Divide the tortilla chips equally among the bowls, or save a few to add at the table to provide additional crunch.