A smoky, rich broth makes this Mushroom Barley Soup delicious, and barley and beans make it hearty, and satisfying. 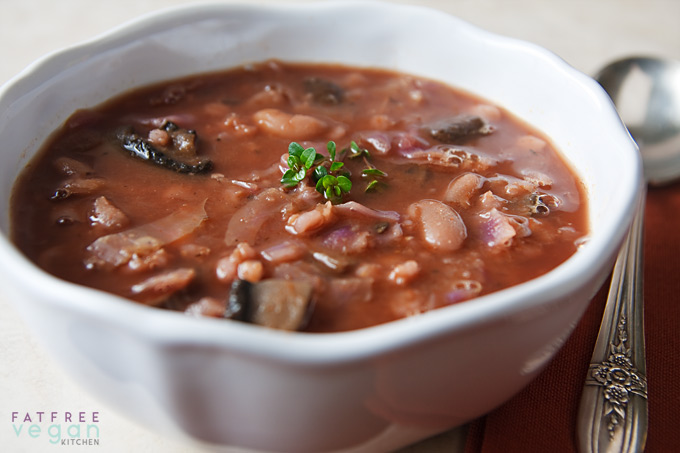 When my friend and frequent blog commenter moonwatcher recommended Anna Thomas’ new book Love Soup, I knew I had to have it. The recipes sounded so unusual and the seasonings so much to my taste (ancho chilies, smoked paprika, toasted cumin) that I was sure it would appeal to me.

Unfortunately, I often have more ambition than time when it comes to reading new books, so I haven’t fully explored Love Soup yet. Instead, I opened the book to the first recipe for which I had most of the ingredients and decided to make an adaptation of it right then and there.

This recipe was originally Mushroom-Barley Soup with Cabbage, but being the kind of cook who wants to get everything–starch, vegetable, and protein–in one pot, I added cannellini beans, making it less brothy and more of a main dish. And true to my procrastinate-then-rush style of cooking, I sped up what was meant to be a slow-cooked soup by using a pinch of baking soda to brown the onions quickly and the pressure cooker to speed-cook the barley.

I also changed the proportions of some of the ingredients and totally left out two, green onions and fresh parsley, that I didn’t have and which might make this soup even more delicious, but I don’t see how. In short, I loved it. The broth was rich and flavorful with just a bare hint of spice and the mushrooms and barley lent a heartiness, something to chew on. If the rest of the recipes are as delicious, this book was a great investment. Thanks for the recommendation, moonwatcher! 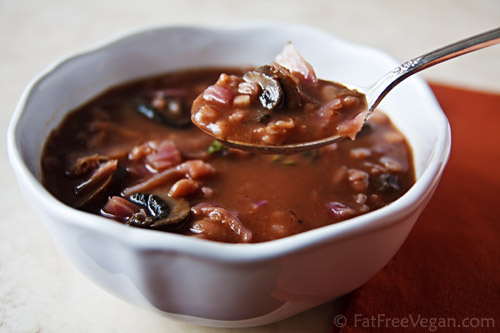 I used the Instant Pot pressure setting to speed up the cooking of the barley, but I opted to cook the rest of the soup on sauté. I like the flavor that slow simmering gives it, but if you are in a big hurry, you could try returning the pot to pressure and cooking under pressure for 4 minutes before allowing a natural release for 15 minutes. But with the time it takes to get to pressure, this isn’t a huge time saver. 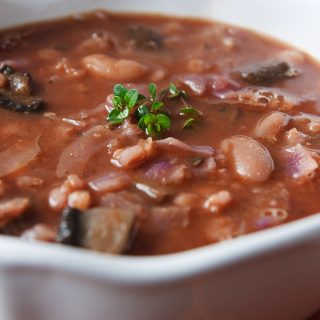 I used red cabbage, which gave this soup a wonderful, rich color, but I think any type of cabbage will do. If you don’t have hot smoked paprika, use mild and add a pinch of chipotle or cayenne to give the soup a slight kick.
Prep Time 10 minutes
Cook Time 1 hour
Total Time 1 hour 10 minutes
Servings 6
Author Susan Voisin

One serving is 1/6th of the recipe, about 2 cups. Each serving is 1 point on Weight Watchers Blue/Freestyle. (For comparison, the entire pot is 7 points.)
Nutrition Facts
Mushroom-Barley Soup with Cannellini Beans and Cabbage
Amount Per Serving (1 serving)
Calories 170
% Daily Value*
Sodium 638mg28%
Carbohydrates 33.2g11%
Fiber 7.5g31%
Sugar 4.4g5%
Protein 9.2g18%
* Percent Daily Values are based on a 2000 calorie diet.

Course Main Course, Soup
Cuisine Vegan
Keyword cabbage soup, instant pot
Have you made this recipe?Mention @SusanFFVK and tag #fatfreevegankitchen in your photos on Instagram.
Share on Facebook Pin This Recipe Share by Email 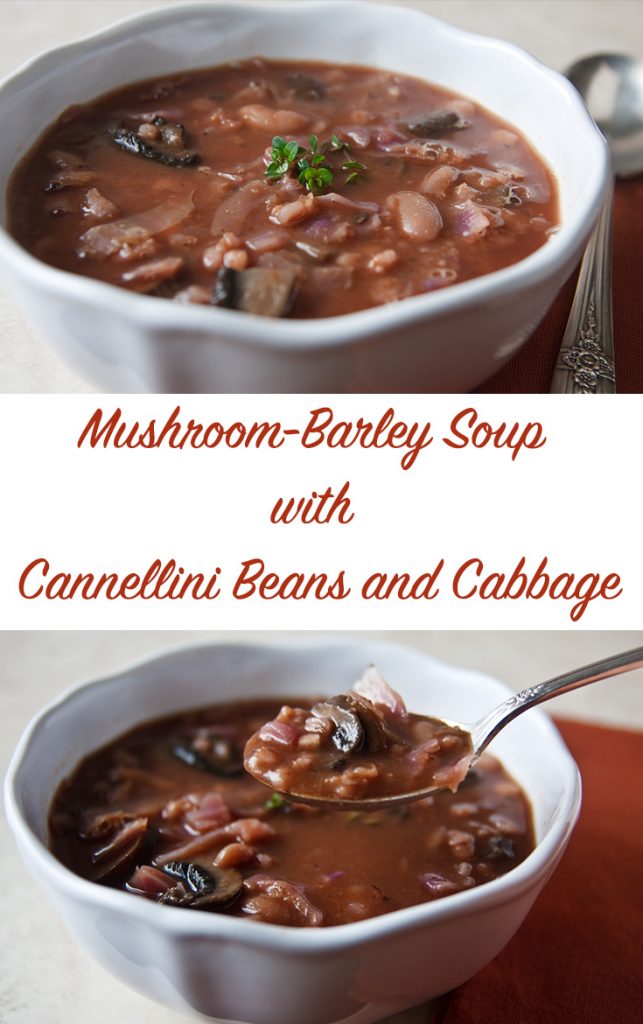