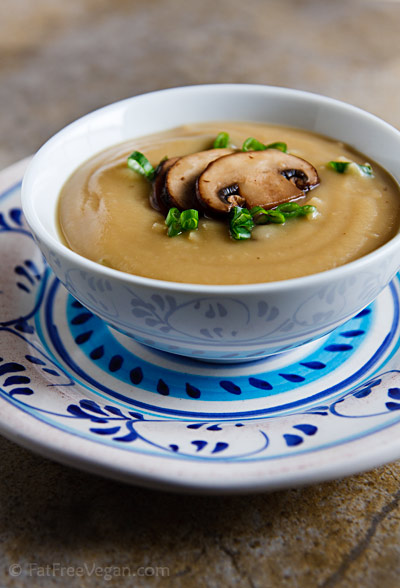 I don’t know what it says about me that after 5 years of blogging, I can still find vegetables that I’ve never written about (or cooked with, to be honest about it).  I’m afraid it means that I get stuck in a rut, using the same tried and true ingredients over and over again, but when I’m feeling a bit more charitable toward myself, I blame it on the local grocery stores, which don’t get a lot of new-to-me produce, and when they do, it’s often old and sickly-looking from lack of anyone buying it regularly.  So a combination of these reasons is how parsnips come to make their first appearance on this blog. Oh, how I wish I’d discovered them sooner!

Parsnips look like white carrots, and you want to buy them when they’re all stiff and cream-colored and pert, not floppy and browning and sad.  I found the stiff and happily organic kind recently at the local co-op, and a conversation with one of the produce guys convinced me that I should either (a) roast them or (b) make them into soup.  Being the raging non-conformist that I am I decided to do both, simultaneously.  Before I pureed the roasted parsnips, though, I took a nibble (or three) and discovered that I loved them straight out of the oven, totally unadorned. I had to press on with my planned parsnip soup, though I’m sure that roasted parsnips will be making another appearance on this blog soon. 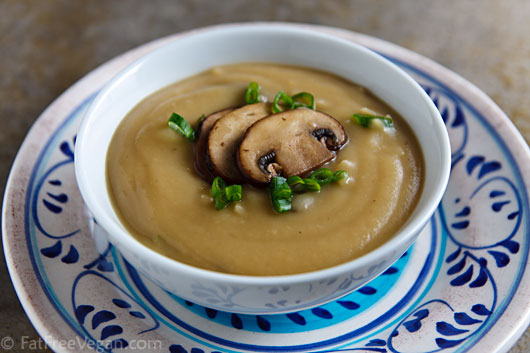 And now the bad news: This recipe is not for everyone. Parsnips have a sweet flavor, brought out by roasting, that some people (ahem E) object to in a soup. D and I loved this soup–it grew on D, as his comments went from “interesting” to “good” to “delicious” to “May I finish off the rest of the pot?”  The mushrooms add a little earthiness, but if you’re not sure about the sweet, skip this soup and wait for my next parsnip recipe. I promise you won’t have to wait another 5 years. 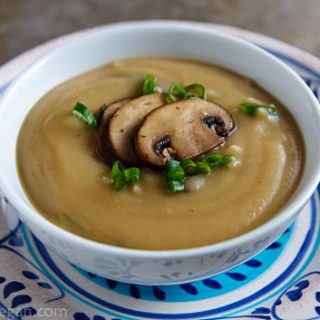 Old or large parsnips can have a hard core, particularly near the top. If you find that your parsnips are overly woody, cut out and discard the hardest part.
Prep Time 10 minutes
Cook Time 45 minutes
Total Time 55 minutes
Servings 4
Author Susan Voisin

For a cream of mushroom-type soup, add the mushrooms with the celery and cook until softened. Blend with the other vegetables as directed.
Nutrition Facts
Roasted Parsnip and Garlic Soup with Mushrooms
Amount Per Serving (1 serving)
Calories 175
% Daily Value*
Sodium 478mg21%
Carbohydrates 38g13%
Fiber 8.5g35%
Sugar 7.3g8%
Protein 7.4g15%
* Percent Daily Values are based on a 2000 calorie diet.

If you haven’t liked Fatfreevegan.com on Facebook, you’re missing out on discussions, information, links to good-looking recipes on other blogs, Ridiculously Easy recipes that I don’t post here, and, most importantly, surprise cat photos.  Click the Like Button today to get updates on your Facebook wall.