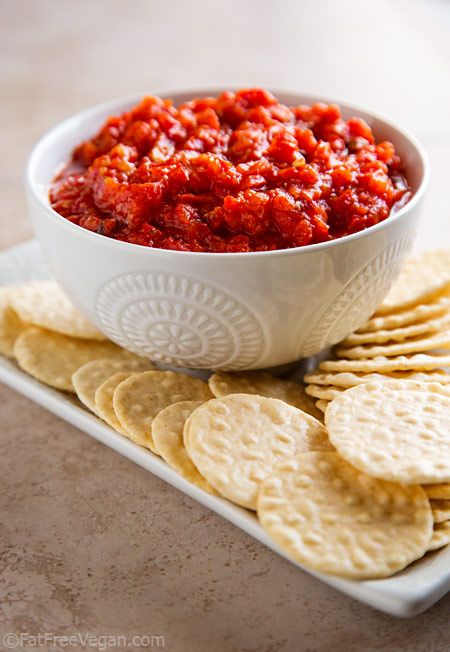 Someone once wrote that every good novel must contain at least one recipe. Although I wouldn’t go quite that far, I agree that food can be a window into a novel’s world and its characters’ culture. I always pay particular attention to what characters are eating, especially when a book is set in another part of the world. Last week, I spent my spare time reading Téa Obreht’s The Tiger’s Wife, a novel about life and death and the stories we tell about how we get from one to the other. I highly recommend it.

The novel is set in fictional towns and cities in a region that is immediately recognizable as the former Yugoslavia. In one pivotal scene near the end, two of the main characters meet in a city on the eve of its destruction and order an elaborate meal, which they eat on a balcony from which they can see the flash of the bombs hitting a neighboring town.

It’s a powerful scene, and the reason for the enormous meal is significant, so I won’t spoil it for you. But as I was reading the names and descriptions of the dishes, I couldn’t help but be intrigued by the ones I didn’t know (tulumbe, tufahije, kadaif) and happy to be reminded of some I did, such as sarma, baklava, and ajvar.

Ajvar (pronounced “eye-var”) is a roasted pepper and eggplant condiment that is popular all over the Balkans and Eastern Europe. In my family, it is familiar as “that delicious red stuff” in the jar that we buy every once in a while from the Middle Eastern grocery store. I think of it as Eastern European ketchup or salsa and use it anywhere I’d use them. 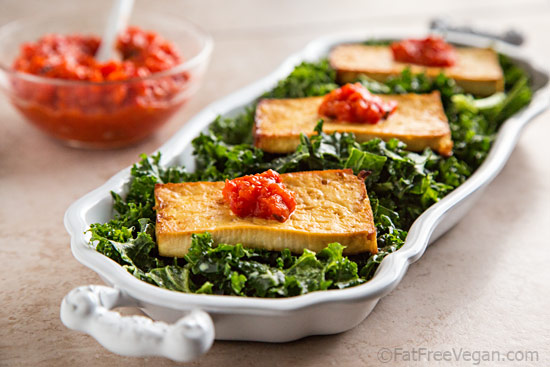 Though you can sometimes find jars of ajvar in the international aisles of larger supermarkets, the flavors are never as bright as homemade. Plus, those store-bought jars are usually full of olive oil, which though tasty, isn’t really necessary.

My homemade version keeps a little of the olive flavor by substituting a few olives for the oil, making this a very low-calorie, unprocessed sauce that you can use any number of ways–dip crackers or veggies in it, spread it on sandwiches, mix a little into hummus, or slather it onto slices of baked tofu, as I did here. You can make it as mild or as spicy as you like by adding or taking away cayenne or red pepper flakes. The possibilities are endlessly delicious. 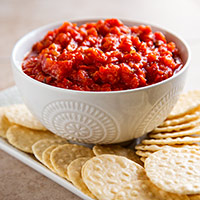 It’s a dip, it’s a sauce, it’s a condiment, it’s a spread! Here are just a few ways you can use ajvar: Serve as a dip with crusty bread, crackers, or raw vegetables. Use as a sandwich spread alone or mixed with vegan mayo. Use anywhere you’d use ketchup–on roasted potatoes is particularly good. Stir into warm pasta. Add a little to your favorite vinaigrette for a zesty salad dressing. Top slices of baked tofu or roasted cauliflower with a dollop of ajvar.
Prep Time 30 minutes
Cook Time 20 minutes
Total Time 50 minutes
Servings 12
Author Susan Voisin 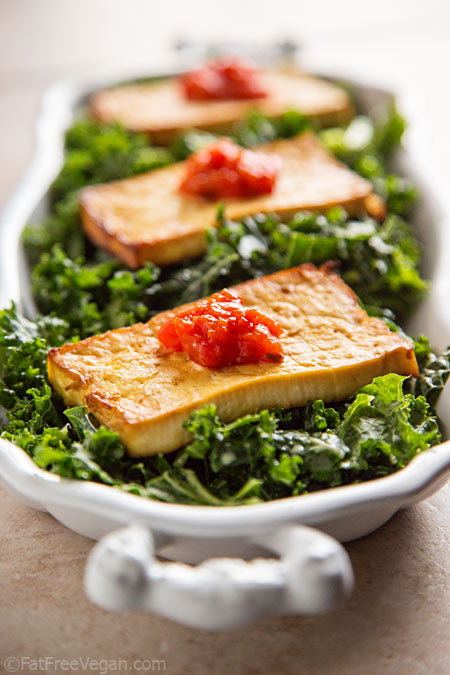