This delicious Vidalia onion stir-fry sauce blends the sweetness of Vidalia onions with aromatic ginger and contains no sugar or thickeners. 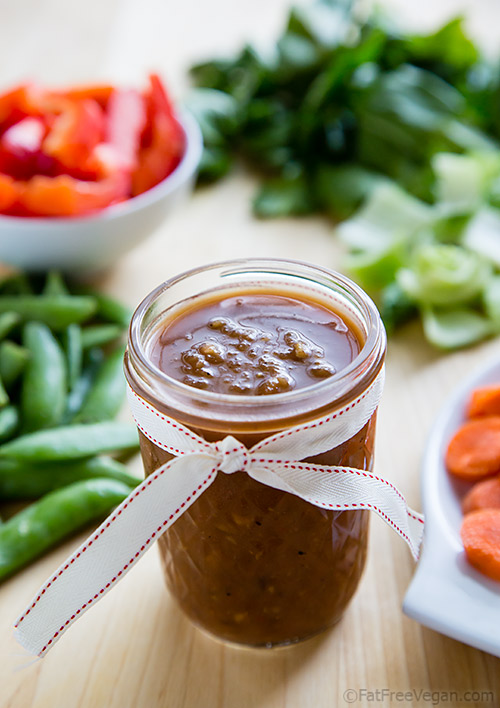 While I was on vacation, I discovered a delicious stir-fry sauce that blends the sweetness of Vidalia onions from Georgia with Asian ginger. It’s a tantalizing fusion of Southern and Asian flavors, and my version doesn’t contain any sugar or thickeners. 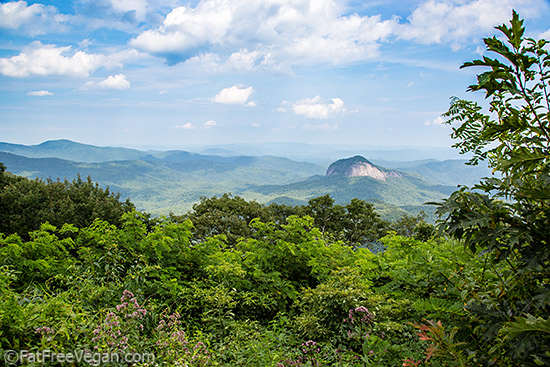 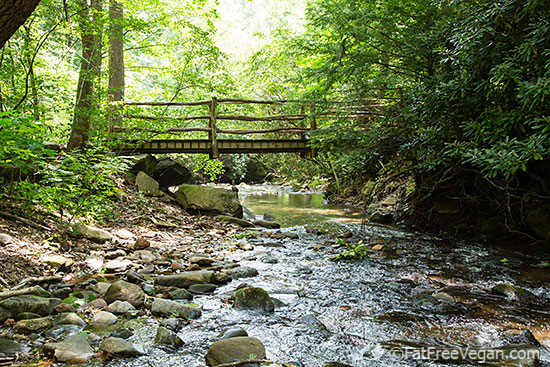 and at least one decadent vegan restaurant: 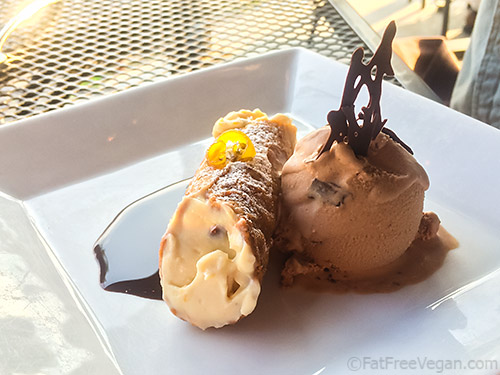 We stayed on top of a mountain in a round house… 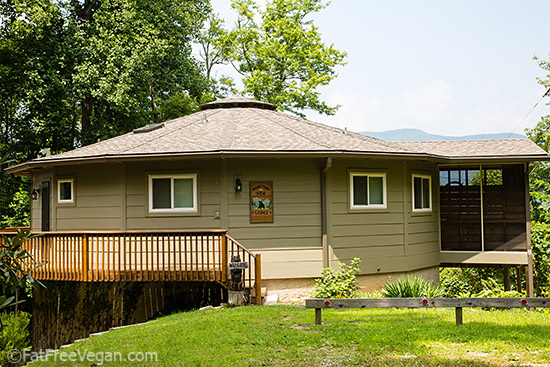 with gorgeous views from a wrap-around deck where we ate breakfast every morning: 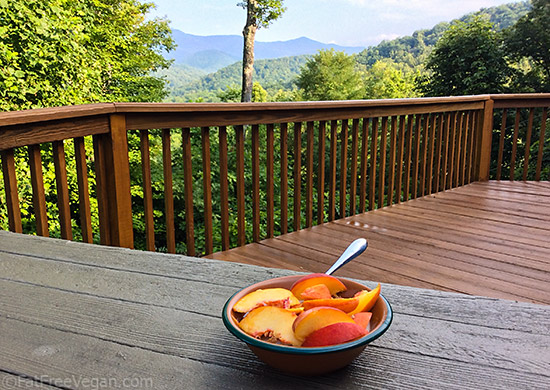 Usually when we go on vacation, I cook most of our meals, but this time I wanted to take a little vacation from cooking as well as everything else. So when we rented our cabin, I made sure it was within driving distance of Asheville so that we could sample some of its great vegan and vegetarian restaurants. We had a couple of excellent dinners at Plant and Laughing Seed (for me, Walnut-Crusted Seitan at Plant and raw Spinach-Pesto Manicotti at Laughing Seed) and a very good lunch at Rosetta’s Kitchen (D’s Tempeh Reuben was the highlight). I wound up cooking just two of the nights we were there, and one of the two was this simple stir-fry: 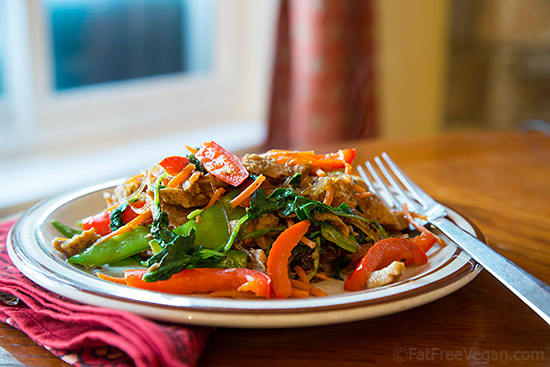 When we had first gotten to Asheville, we stopped for supplies at Whole Foods. Just as we entered the door, a woman was offering samples of a stir-fry made with different sauces. 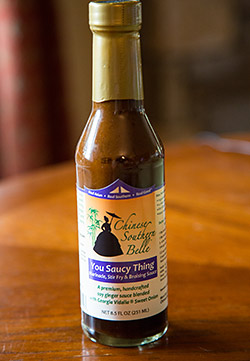 She turned out to be the creator of the sauces and founder of Chinese Southern Belle, the company that makes them. She created the sauces using natural ingredients, infusing her family’s Chinese recipes with Southern ingredients. Using a hot plate and a wok, she gave us a demonstration of a two-minute stir-fry using her You Saucy Thing Vidalia Sauce and quick-cooking vegetables: shredded carrots, baby kale, and snow peas. I decided that a quick stir-fry with a pre-made sauce was just the kind of “no cooking cooking” I wanted to be doing on vacation, so we bought a bottle of her sauce, some quick-cooking vegetables, a package of ready-made seitan, and some rice noodles.

I stir-fried the vegetables in the sauce, added the seitan and more sauce, and then stirred in the pre-soaked rice noodles and a little more sauce. It was a delicious meal–so delicious that I took a closer look at the bottle and found that the sauce contained 6 grams of fat per two tablespoons and the ingredients included two kinds of oil and tahini paste. Oops! It wasn’t the richest meal we’d had on vacation, but it was higher in fat than I expected it to be. (This is what happens when you read the label just to find out whether a food is vegan or not.)

Still, it was a great sauce, full of the flavors of onion, ginger, and sesame, and I decided to try to recreate it at home without so much fat. I sauteed my Vidalia onion, garlic, and ginger without any oil, and then after adding vegetable broth, I pureed half of the vegetables in the blender. This made the sauce thick without needing any starch. To give the sauce a sweet taste without sugar, I added unfiltered apple cider. I finished it off with a touch of roasted sesame oil, which gave this Vidalia onion stir-fry sauce just the right hint of sesame flavor without a lot of fat. 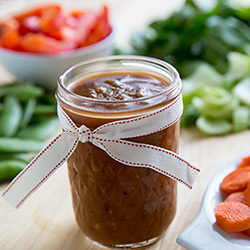 I found that using the amounts of red and black pepper given, the sauce tastes very spicy in the jar but much less so when added to vegetables, so use a little more red pepper flakes if you like a spicier stir-fry.
Prep Time 5 minutes
Cook Time 30 minutes
Total Time 35 minutes
Servings 10
Author Susan Voisin

Half a teaspoon of dark (roasted) sesame oil gives the sauce a very light sesame flavor which, in my opinion, is essential to the flavor of the sauce. It also contributes about 1/4 of a gram of fat (about 2 calories) per serving. If you’d like, you can leave it out, or if you’d like a more pronounced sesame flavor, you can double or triple it and still have a sauce that contains less than a gram of fat. The exact amount of calories, fat, and sodium will depend on the vegetable broth used. The sauce should keep about two weeks in the refrigerator. Freeze it if you want to keep it longer.
Nutrition Facts
Vidalia Onion Stir-fry Sauce
Amount Per Serving (1 serving)
Calories 26 Calories from Fat 2
% Daily Value*
Fat 0.2g0%
Sodium 283.3mg12%
Carbohydrates 5.4g2%
Protein 0g0%
* Percent Daily Values are based on a 2000 calorie diet.

I hope you enjoy this sauce on your favorite vegetable stir-fry. For more recipes, be sure to subscribe to my NewsBites newsletter.